Baby Cakes is the thirteenth episode of the second season of My Little Pony Friendship is Magic and the thirty-ninth episode overall. Pinkie Pie babysits the newborn twins of Mr. and Mrs. Cake, but she finds that the task is much harder than she initially expected.

This episode is listed as number twelve on Zap2it's episode guide.

The first part of Happy Monthiversary, Pinkie telling jokes to the Cake twins, and the Piggy Dance reappear in Cakes for the Memories.

The episode starts with Pinkie Pie, Applejack, Rarity, Fluttershy, Twilight Sparkle, and Rainbow Dash looking down on the newborn baby nursery of the Ponyville Hospital. Mr. Cake shows his new Pegasus son, Pound Cake, and his new unicorn daughter, Pumpkin Cake. Pinkie Pie goes into the nursery to start celebrating, but is soon reprimanded by Nurse Redheart several times to be quiet so she doesn't wake up the other babies (eventually to the point of being kicked out of the nursery). After Applejack asks how Pound Cake is a Pegasus and Pumpkin Cake is a unicorn, Mr. Cake explains why he has unicorn and Pegasus children even when he and Mrs. Cake are Earth ponies by saying that distant relatives of theirs were Pegasi and unicorns.

"My great-great-great-great-grandfather was a unicorn, and Cup Cake's great-aunt's second cousin twice removed was a Pegasus. That makes sense, right?"
— Mr. Cake explaining why Pound Cake and Pumpkin Cake are a pegasus and a unicorn respectively.

A month later, Pinkie Pie brings the babies a one-month celebratory cake and song. After singing to the babies and popping out of their cake, she plays peek-a-boo with them. Shortly after that, Mr. Cake changes their diapers, and Mrs. Cake brings them their bottles to feed them. After Mr. Cake burps the babies, they both run off to play with Pinkie again.

After being reminded about food, Mrs. Cake remembers a large catering order to complete. However, they need a babysitter. They ignore Pinkie Pie's requesting to babysit, and begin their search by asking Fluttershy. However, Fluttershy declines, saying she promised to go on a picnic with Angel. They then ask Twilight, who also declines because she is busy summarizing her reports to send to Princess Celestia. Applejack declines because she is too busy saving her apples from a swarm of ravenous caterpillars. Rainbow Dash declines because she has tickets to the Wonderbolts air show. When Mr. and Mrs. Cake ask Rarity, however, she simply refuses with no given reason to her decline. Finally, they oblige to let Pinkie Pie babysit their children.

The Cakes leave Pinkie Pie a big list of what she needs to do. After they leave, Pinkie Pie is immediately left with two crying babies to deal with. She tries to cheer them up with some more peek-a-boo, and pulling a face. She then begins a pseudo-standup comedy show, and begins telling jokes. While this seems to calm them down to begin with, they start crying at Pinkie's second joke. Pinkie Pie resorts to singing a quick song and dancing around her stage, but this has no effect as the babies begin crying during the song. Falling over, Pinkie Pie accidentally knocks a bag of flour off the top of the refrigerator, which empties on her. This manages to make the babies laugh.

At snack time, Pinkie Pie brings the babies their prepared meals, only for Pumpkin Cake to start eating the tablecloth and for Pound Cake to end up with food on his head. Pinkie Pie then tries to give the two babies a bath, and has trouble to get them into the tub. Once they are in the tub, she manages to keep them shortly entertained by blowing bubbles with the soap. This is short-lived, since they start crying again after she buries them in tub toys. After they get Pinkie wet, she brings in another bag of flour but begs them not to make her use it. The Cake twins continue crying, forcing Pinkie to dump the flour over her wet body, turning it into dough.

"Babies take a lot of work, and some ponies are just not cut out to handle the responsibility."
— Twilight Sparkle

Pinkie Pie then needs to change the babies' diapers after noticing the smell. After cornering and wrestling with the twins, she ends up with the two diapers on her instead. Twilight then arrives and offers help to Pinkie Pie, who is more than happy to accept. However, Twilight then says that she expected that Pinkie would need help, and implies that Pinkie Pie is not cut out to handle the workload and responsibilities of babies. Feeling insulted, Pinkie Pie tersely thanks Twilight for dropping by, pushes her out the door, and shuts it in her face. Pinkie huffs behind the door that Twilight would think that she can't handle the situation on her own, but then she admits that perhaps that's because she hasn't experienced this situation before. She resolves to do so, and on her own.

Determined to prove that she is a responsible pony, Pinkie Pie begins to be assertive and stops Pound Cake jumping on his crib and Pumpkin Cake from chewing on a toy. Setting Pumpkin Cake beside her brother in his crib, Pinkie tells the babies that it's time for their naps and to go to sleep, and unexpectedly, they comply immediately and fall asleep. Tucking them in, raising the safety rail and tossing the toy into the closet, Pinkie Pie leaves the room, but when she turns around to close the door, she sees that they have disappeared.

She immediately starts to search for them, and quickly finds Pumpkin Cake chewing on the toy in the closet. She is shocked to find Pound Cake walking on the ceiling using his wings. Pinkie uses suction cup boots to get Pound Cake down, but is then utterly flabbergasted to witness Pumpkin Cake using her magic to move a bunch of toys from her crib to chew on. When Pinkie Pie puts these away, using a chain and padlock on the toybox for good measure, she grabs on to Pound Cake to stop him flying around, but she ends up getting dragged around down to the kitchen and storefront, knocking over all sorts of baked goods before being dragged back upstairs. Pumpkin Cake then figures out how to levitate herself. Now faced with two flying foals, Pinkie traps them under a play pen and tapes it to the floor, only for Pumpkin Cake to make the side intangible to walk through, while Pound Cake flies upward to break the tape. Pumpkin Cake uses her telekinesis to break the padlock and promptly chews on a toy while Pound Cake zooms around the room.

Frazzled, stressed out, and feeling completely overwhelmed, Pinkie Pie bursts into tears. The twins feel bad of what they did and manage to cheer Pinkie Pie up by telekinetically covering themselves in flour. After that, she manages to get the twins to fall asleep in Pumpkin Cake's crib.

Pinkie Pie writes a letter to Princess Celestia, saying that being a caregiver means more responsibility than just being a playmate, and that sometimes our desire for responsibility can outrun our actual ability to handle it.

After cleaning everything up, Mr. and Mrs. Cake return home. Expecting the place to be a mess, they are astounded by the immaculate condition of their home, and praise Pinkie Pie for her unexpected level of responsibility. They ask her if she wants to be their permanent babysitter, but Pinkie Pie turns them down, saying that she "should be available a week from... never!" But once she hears the twins utter her name as they sleep, she has a change of heart and says she has some free time next Tuesday.

Applejack: Now how in thunderation is one of them twins a Pegasus, and the other one a unicorn?
Mr. Cake: Easy. My great-great-great-great-grandfather was a unicorn, and Cup Cake's great-aunt's second cousin twice removed was a Pegasus. That makes sense, right?
Rainbow Dash: Aw yeah, just you wait! Once little Pound Cake gets his wings going, he'll be all over the place.
Twilight Sparkle: And be careful around Pumpkin Cake.
Rarity: Baby unicorns get strange magic surges that come and go.

Mr. Cake: [groans] [unenthusiastically] Pinkie Pie, how would you like to babysit for us?
Pinkie Pie: [gasps] I dunno. I'll have to check my schedule.

Pinkie Pie: There. See? Nothing to this baby-sitting business. [Collapses]

Twilight Sparkle: Hi! I finished up the work I had to do so I thought I'd stop by and see if you needed any help. Whoa!
Pinkie Pie: Thank you, thank you, thank you for coming! I can't begin to tell you what my day has been like, I mean, these babies just won't listen to reason, and don't even get me started on their taste in stand-up comedy.
[ba-dum tish]

Pinkie Pie: Pound Cake. [growls] This is a crib. It is only to be used for napping, sleeping, and on occasion with permission, as a pretend old-timey Western fort. It is not a trampoline, so stop your jumping right now, mister!

Pinkie Pie: [giggle] You know? You're right. That is funny. 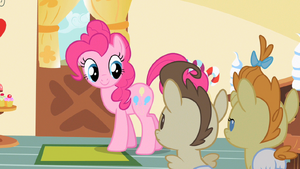