Banana Fluff is a female unicorn pony with a light yellow coat, two-tone purple mane and tail, cerise or blue eyes, and a cutie mark of three brilliant-cut diamonds. Outside of Canterlot Boutique and merchandise, her cutie mark is of three hearts—two blue and one green. She is unnamed in the show, but she is named in merchandise.

A translucent-bodied mini-figure toy and a collector card of Banana Fluff were released together as part of the seventh wave of mystery packs in January 2013. This version of her has three gemstones for a cutie mark, and her identity is confirmed in a mystery pack wave 7 image formerly displayed by a mystery pack listing on the website of the Greek company KAPSIS. According to her collector card, Banana Fluff "collects pretty gems to make jewelry!" 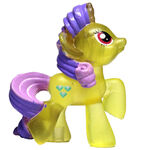 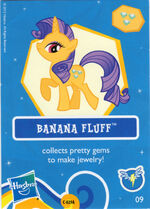