Barber Groomsby is a male Earth pony barber who appears in My Little Pony: Friendship is Magic Issue #10 and On Your Marks. He has a white coat, brown mane, tail, and mustache, blue eyes, and a cutie mark of a pair of scissors and comb, and he wears a blue, white, and red-striped bow tie. He first appeared in merchandise.

Barber Groomsby, as well as Magnet Bolt, Cherry Spices, Electric Sky, and "Rivet", was to appear in Boast Busters.[1]

Barber Groomsby makes his first in-show appearance in the season six episode On Your Marks.

On My Little Pony: Friendship is Magic Issue #10 page 6, Barber Groomsby appears outside a barbershop as Big McIntosh travels across the Summer Wrap-Up Festival grounds in search of Lugnut.

A mini-figure toy and collector card of Barber Groomsby are included in the seventh wave of mystery packs. The mini-figure toy's eyes are printed reversed. According to different versions of his collector card, Barber Groosmby "makes sure everypony's mane looks great!" and "helps ponies look great." Little, Brown's Mini Pony Collector's Guide pages 135 and 156 show a version of the toy with unreversed eyes. A mystery pack wave 7 image formerly displayed by a mystery pack listing on the website of the Greek company KAPSIS depicts Barber Groomsby, referred to as simply Barber, with the same design as for the show. 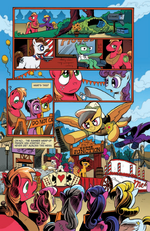 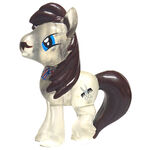 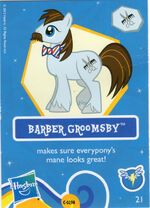