For the animal and the song within this episode, see Creatures#Vampire fruit bat and Bats (song).

Bats! is the seventh episode of the fourth season of My Little Pony Friendship is Magic and the seventy-second episode overall. When vampire fruit bats take over Sweet Apple Acres on Apple Bucking Day, Applejack and Fluttershy are at odds regarding how to deal with them, but disaster strikes when Fluttershy turns into a vampire bat-pony after one of Twilight's spells backfires. The title could be a pun on the common saying "Rats!" which is said when something wrong or unfortunate happens.

On April 1, 2013, Meghan McCarthy wrote as part of an April Fools' Day joke that the eleventh episode of the fourth season would be titled "Bats" and that "It's just like the musical 'Cats', but with, you know, bats. And ponies. But mostly bats."[3]

The episode's premise was originally pitched to be a musical episode by Amy Keating Rogers[4] and its script was locked in October 2012.[5] The original opening credits of the episode incorrectly credited Meghan McCarthy as the episode's writer instead of Merriwether Williams.[1] This was corrected in reruns.

Applejack awaits the sunrise atop a hill at Sweet Apple Acres. As a rooster crows, Applejack declares it officially Apple Bucking Day. She trots past a few of the apple trees, bucks one, and watches the apples fall, only to find them rotten and mushy. Applejack looks up and sees a colony of bats flying overhead.

Applejack summons her friends for a "Sweet Apple Acres code red" and tells them that vampire fruit bats are swarming the orchards. She's determined to keep the fruit-sucking bats away from her prized blue ribbon apple—a much larger apple that she plans to enter into a competition in Appleloosa. Fluttershy proposes asking the bats nicely to stay away from the apple, but Applejack is skeptical.

When Fluttershy tries talking with the vampire fruit bats, they spit apple seeds at her. Fluttershy admits that she is unsure of the bats' answer because she has never communicated with vampire bats before. Applejack is unwilling to let the vampire bats claim any more apples, calling them "nothing but a bunch of monsters".

"They've crossed the line, it's time that we attack!"
— Applejack in the song Bats

The rest of Applejack's friends, except Fluttershy, agree to round up the vampire fruit bats. When Fluttershy suggests letting the bats have part of the orchard, Applejack briefly snaps. Fluttershy elaborates that a sanctuary for the bats would give them their own apples to enjoy, and that the seeds they spit out would grow into more productive trees. Applejack is still very hesitant about the idea, as she recalls Granny Smith's stories of the last vampire fruit bat infestation. Thinking for a moment, Twilight formulates an idea to stop the bats from eating apples.

The friends regroup at the Golden Oak Library, and Twilight says she found a spell that will stop the bats from eating apples, but it requires the use of Fluttershy's Stare. While Fluttershy is reluctant to use it, her friends convince her once she realizes what's at stake.

Back at Sweet Apple Acres, the Mane Six round up the vampire fruit bats onto a single apple tree, where Fluttershy stares them into submission. When Twilight uses her spell on the bats, they refuse to eat apples afterward. With their mission accomplished, Applejack thanks her friends for their help. As they go to sweep up the rotten apple cores, Fluttershy looks over at an apple.

The next day, Applejack is back on the hill for "take two" on Apple Bucking Day. A rooster crows, and she sets off to buck apple trees. However, she finds that the apples are still rotten, sucked dry of their juice.

Applejack rounds up her friends again, with Twilight surprised that the spell didn't work. The friends track down the vampire fruit bats and find that they're still not eating apples—the spell seems to still be working. Twilight asks Fluttershy if any other creature could have done this, but Fluttershy doesn't have an answer. Twilight thus proposes a stakeout to catch the true culprit in the act.

That evening, the seven friends walk through the orchards, with Fluttershy remarking of hunger and looking ravenously at the apples. When the ponies split up, they see a figure lurking in the shadows. Applejack signals the others to her location, and to their complete shock, they discover who's been eating the apples: Fluttershy, who's been turned into a vampire pony!

The ponies try to talk with the transformed Fluttershy—or "Flutterbat", as Rarity calls her—but she only hisses at them in response. When they try to make sense of how this happened, Twilight theorizes that, when she cast her spell on the vampire fruit bats, it transferred their desire to be vampire fruit bats into Fluttershy through her Stare. When Flutterbat flies off, Twilight and her friends give chase, but she easily eludes them due to her heightened bat-like senses. Pinkie Pie makes a comment about Fluttershy's Stare, and Twilight comes up with an idea.

Applejack sacrifices her giant blue ribbon apple to lure Flutterbat into a trap. When she swoops down to eat the apple, Twilight and friends surround her with mirrors, causing her to use the Stare on herself and enter a trance. Twilight casts her spell again, and Fluttershy returns to normal.

In the end, Applejack decides to take Fluttershy's advice and sections off a part of the orchard for the vampire fruit bats. She apologizes to Fluttershy for not listening earlier, and Rainbow Dash expresses her excitement for the upcoming cider season.

Later in Fluttershy's cottage, Applejack and Fluttershy close off their latest journal entry, with Spike's help. Applejack gives Fluttershy an apple as a peace offering, but before she can respond, Pinkie Pie pounces on the apple, pretending to be a fruit-eating vampire-pony. As the friends share a laugh, the screen zooms in on Fluttershy's mouth and reveals a tiny fang.

Applejack: Attention! This is a Sweet Apple Acres code red! I need all hooves – and claws – on deck!

Rarity: Uh... Fluttershy, sweetness, please come down, and... do stop being a vampire bat. 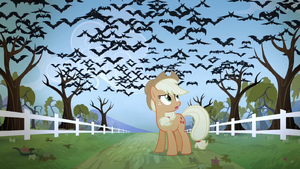