One fast sunrise! Celestia must be caffeinated.

Ooh, just look at all these wonderful apples.

Yet, ah still can't catch all these apples.

Uh..um..not so wonderful after all?

Why are all the apples rotten!?

I wonder what's going on?

Do you know, what kind of danger my trees are in?

And here it is!

You've really been using the old earth pony biomancer ability for all it's worth with this one, haven't you?

That thing is charged with enough bio-energy to equestriaform the Moon with.

Applejack, your Derpy is showing.

All rotten apples will be stomped on.

♪ Oh, gimmie a break, you're bein' too kind ♪

That made one unhappy guest.

♪ And that is just a fact ♪

Alright, you two, knock it off!

♪ That's where I have to disagree ♪

♪ They're loyal to their family ♪

♪ And mean as sin ♪

♪ Will ya look at the state my trees are in?! ♪

♪ Well, I for one don't have a doubt ♪
♪ These vermin must be stamped right out ♪

♪ I second that, they've got to go ♪

♪ These bats, they've got to hit the road ♪

♪ It comes down to just one simple fact ♪

Putting a feast over Fluttershy? With Pinkie on it?

Why you do this to me?

The Serious 5 (with Spike) disagree on the Shyly Pony.
Add a photo to this gallery

"There was still cider, right."

Rainbow's still in love with cider since The Super Speedy Cider Squeezy 6000.

Bring me some tea. Two sugars.

...And some crumpets too, if you please.

Look at all my books!

"This circumstance is plenty dire to me!"

I believe somepony needs a cidervention.

"Think of the cider!"

What's that on the ceiling?

Whaddya choose?
Add a photo to this gallery

Dashie on top of Applejack's house.

Get down from there!

That sure is an apple tree.

I see what you did there!

There. I've fixed everything.

And there was much rejoicing.

Like, whoa, you ever looked at an apple? Really looked at it?
Add a photo to this gallery

Do you want an apple, Mr. Fruit Bat?

You okay, Rarity? You and Sweetie Belle seem to have apple magnets in your horns.

Well, we better find whoever it was.

I have a crazy idea that I think for some reason is actually going to work.
Add a photo to this gallery

What is it, Fluttershy?

What's wrong with you, Fluttershy?

Well, I'm an alicorn now and Rarity is a unicorn...

The two of us will use our magic as flashlights.

Allow us to show you.

With her hair? Now that's Pinkie being Pinkie.

Fluttershy's not as bothered by the light as Applejack... ironically.

The Mane 6 begins the stake-out.

Even Princess Twilight gets spooked at times.

A vampire Fluttershy? The fan-art will explode!

There is no Fluttershy, only Zuul.
Add a photo to this gallery

Fluttershy, what happened to you?

Fluttershy, get down from there.

Fluttershy never did that to me.

Maybe we should let her come down when she's ready.

"Run for your lives!"

Pinkie, it's okay. Don't be scared. We need to find out what happened.

look she's hanging upside down on her branch again.

Who knew pinkie pie could use her mane as a drill? Well, she's pinkie pie. What did you expect?

I guess that was the most normal thing that happened today.

"This was actually our fault."

OK that's me, the bat, and Fluttershy.

Two things on the same target.

Which causes a side effect by one of them to the other.

It turned her into a bat.

BOOM. Fluttershy sure is fast, even as a bat.

Watch out for that apple... Too late

I raise the moon now.

"If she keeps this up, your whole crop will be gone in no time."

"I want my best friend back."

Fluttershy, get back here.

"If we only had Fluttershy," is a little ironic since they are two in one body.

I have a plan to change her back.
Add a photo to this gallery

"So much for having the winning apple at the Appleloosa state fair, huh?"

The sweet scent of apples compels you!

♪ The girl is a vampony!
I'm telling you, it's true!
She's after something juicy!
So watch out or she might get you! ♪

Oh my, what happened to me?

Ow! Transforming is no fun.

"Where am I?" In Equestria, dummy.

"What happened to me?"

You just gave the fanartists another new meme

"Me too. And I was there."
Add a photo to this gallery

I vant to suck its juice!

Awww, darn! I wanted to fool you.

And everything was back to normal.

Minuette is in for a surprise the next time Fluttershy goes to her dental appointment.
Add a photo to this gallery 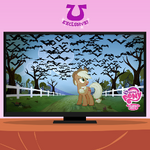 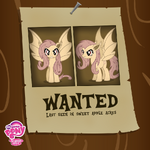 Have you seen this Flutterbat?
Add a photo to this gallery
Retrieved from "https://mlp.fandom.com/wiki/Bats!/Gallery?oldid=2158963"
Community content is available under CC-BY-SA unless otherwise noted.