Beauty Brass is a female background Earth pony who appears in The Best Night Ever, Equestria Games, and Gameloft's mobile game. She has a light blue coat, brown mane and tail, purple eyes, and a cutie mark of an F-clef. She is unnamed in the series, but she is named in other media.

Beauty Brass first appears in The Best Night Ever, playing the sousaphone as part of a four-pony musical ensemble at the Grand Galloping Gala with Octavia Melody, Frederick Horseshoepin, and Parish Nandermane. At Pinkie Pie's request, Beauty Brass and the rest of the ensemble play the Pony Pokey.

Beauty Brass reappears later in the episode Equestria Games; she is partly seen in the stadium crowd as Spike attempts to light the Games torch.

Beauty Brass appears providing music at the Friendship Festival in My Little Pony The Movie.

Beauty Brass is a playable character in Gameloft's mobile game, made available in the version 2.1 update on June 13, 2013. Her in-game description states, "Part of a four-pony musical ensemble, Beauty Brass is a sousaphone pony who loves music and played in the Grand Galloping Gala." 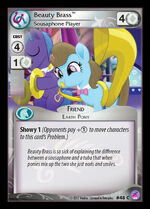 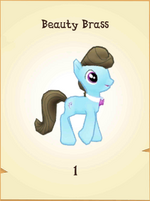 Retrieved from "https://mlp.fandom.com/wiki/Beauty_Brass?oldid=2121642"
Community content is available under CC-BY-SA unless otherwise noted.