Berryshine, or Berry Punch, is a female Earth pony with a web color plum coat, raspberry pink mane and tail, fandango eyes, and a cutie mark of a bunch of grapes and a strawberry. Lauren Faust privately named the character "Pinot Noir" after her favorite wine,[1][2] but the character was later explicitly named "Berryshine" and "Berry Punch" in different merchandise and games. Berryshine shares her design with Cherry Berry. She has a speaking role in It Isn't the Mane Thing About You, the chapter book Rainbow Dash and the Daring Do Double Dare, and in the IDW comics' My Little Pony: Friends Forever Issue #23.

Berryshine appears frequently in the series as a background pony. She makes her debut in Friendship is Magic, part 1 when she, along with Cherry Berry, Golden Harvest and Sweetie Drops, watches Twilight Sparkle arrive in Ponyville for the first time. She makes her first prominent appearance in Bridle Gossip when she whisks a little filly from her doorstep out of fear of Zecora.

In Winter Wrap Up, Berryshine makes appearances as both a member of the plant team and a member of the animal team, sometimes simultaneously. She also briefly appears as a Pegasus in the same episode, and a Pegasus with her color scheme and cutie mark falls exhausted after the Running of the Leaves in Fall Weather Friends, where she wears the number 6. Berryshine herself competes in the Running of the Leaves as contestant #88.

She inspects some apples in Call of the Cutie, but gets scared off when Apple Bloom tries to force her to buy them; later in the episode, she drinks directly out of a punch bowl in Diamond Tiara's cute-ceañera after checking to see if anyone is looking. Sabrina Alberghetti specifically chose Berryshine for the punch bowl scene due to her cutie mark, and had intended for her to burp after drinking out of the bowl.[3][4]

Berryshine, along with Sweetie Drops, tries to hound Fluttershy to Rarity's Carousel Boutique in Green Isn't Your Color, but both are disappointed when they find her gone. In Over a Barrel, Berryshine appears in Appleloosa wearing a straw-colored cowpony hat, although she switches to a gray top hat during all of her running sequences.

Berryshine appears again in The Return of Harmony Part 2 where she sneezes from a pepper shaker, one of Discord's tricks. In Luna Eclipsed, she alternates between wearing a ghost sheet[5] and a safari outfit, sometimes appearing twice in the same shot with each one of her wearing a different costume. Her safari outfit, a recolor of the one worn by Daring Do but with the pith helmet worn by Twilight Sparkle in Feeling Pinkie Keen, was added to the episode in order to fill out the crowd scenes and due to time constraints.[6]

Berryshine and "Piña Colada" take part in the Sisterhooves Social; they lose the first pie-eating contest, but win the main event. At the race, they wear matching white shirts and appear briefly in the egg-carrying challenge, dropping their eggs while Rarity and Sweetie Belle pass them by. They take the lead in the final stretch of running course and win the Sisterhooves Social. Despite taking part in the competition, Berryshine's character design and color scheme is also used for some of the spectator ponies.

In The Super Speedy Cider Squeezy 6000, during the song, Flim closes Berryshine's dropped jaw. In Hearts and Hooves Day, a way-too-lovestruck Big McIntosh inadvertently drags her house way off her property when Apple Bloom attempts to stop him from reaching Cheerilee by hitching him to it. In A Canterlot Wedding - Part 1, she walks through Canterlot at night, and she makes multiple appearances in crowds in Part 2.

In The Crystal Empire - Part 2, she briefly appears with the Crystal Ponies in the audience of the Crystal Faire jousting match between Rainbow Dash and Fluttershy at the Crystal Empire. In Too Many Pinkie Pies she drinks juice with Cloud Kicker. In One Bad Apple during Babs Seed (song), she sits in the movie theater and eats popcorn.

She also makes several appearances in Pinkie Pride, Simple Ways, Filli Vanilli, Twilight Time, It Ain't Easy Being Breezies, Maud Pie, For Whom the Sweetie Belle Toils, Leap of Faith, and Testing Testing 1, 2, 3. She appears at the Traders Exchange in Trade Ya!, the Equestria Games in the episode of the same name, and at Twilight Sparkle's castle in Twilight's Kingdom - Part 2.

Berryshine flees from a swarm of twittermites, participates in the Running of the Leaves in Tanks for the Memories, attends the Appleloosa Rodeo in Appleoosa's Most Wanted, appears at Cranky Doodle Donkey and Matilda's wedding in Slice of Life, attends the Grand Equestria Pony Summit in Princess Spike, attends the friendship party in Party Pooped, appears in Ponyville's shared dream in Do Princesses Dream of Magic Sheep?, and takes part in the Sisterhooves Social with "Piña Colada" in Brotherhooves Social. In The One Where Pinkie Pie Knows, Berryshine receives a delivery from Pinkie Pie. She also appears in the final group shot during Friends Are Always There For You in The Cutie Re-Mark - Part 2.

In On Your Marks, Berryshine is seen grape-stomping with fellow berry pony Cherry Berry along with Apple Bloom. In A Hearth's Warming Tale, she helps with decorating for the Hearth's Warming and sings the final lines of Hearth's Warming Eve Is Here Once Again (Reprise). In Applejack's "Day" Off, she appears in the Ponyville Day Spa. In The Cart Before the Ponies, she participates the Applewood Derby. In The Fault in Our Cutie Marks, she attends the baseball game and Gabby's cute-ceañera.

In Celestial Advice, Berryshine is one of the many ponies at the medal ceremony for Starlight Glimmer, Trixie, Thorax and Discord. At one point, she is seen talking with the Cutie Mark Crusaders. In A Flurry of Emotions, she attends the art show hosted by Spearhead. In Fame and Misfortune, she appears among Twilight Sparkle's fans. In It Isn't the Mane Thing About You, she appears in the crowd at Davenport's auction with a speaking role. She also appears in flashback of Rainbow Dash's birthday party in Secrets and Pies.

Berryshine attends the comedy club in The Maud Couple, talks to Lyra Heartstrings and Shoeshine in Surf and or Turf, and watches the play in Horse Play.

In the special My Little Pony Best Gift Ever, Berryshine appears at the Ponyville marketplace as a fruit vendor during One More Day.

Times are approximate and taken from videos available online.

In Equestria Girls, Berryshine or a similar looking pony appears in the aerial view of the Crystal Empire train station.

In Rainbow Rocks, Berryshine is one of many ponies seen in the establishing shot of Ponyville.

In Friendship Games, she is seen running around in the Ponyville Day Spa when Midnight Sparkle opens one of the dimensional rifts to Equestria.

Berryshine appears walking past the Canterlot library in its second establishing shot.

Berryshine appears in My Little Pony The Movie during We Got the Beat, We Got This Together, and Tempest Shadow's attack on Canterlot.

In Triple Pony Dare Ya, Berryshine appears waiting in line for Granny Smith's Hearth's Warming fruitcake at the Ponyville marketplace. In Sundae, Sundae, Sundae, she attends the unveiling of the ice cream museum at Sugarcube Corner.

Chapter 8 of the chapter book Twilight Sparkle and the Crystal Heart Spell, "Gilda's Got Game", mentions a character by the name of Berry Punch. Pinkie Pie leaves Twilight's cottage for "the housewarming party at Berry Punch's new place," singing "Oh, the bestest cottage is a warm one! A cottage that is filled with frieeends! So let's warm this house and fill it up with a party that never eeeends!"

Chapter 3 of Rainbow Dash and the Daring Do Double Dare, "The Golden Oak Library Society", also mentions a Berry Punch: "Plot Twist and Berry Punch walked in together, followed by their friends Lyra Heartstrings, [Sweetie Drops/Bon Bon], and Wild Fire."

Berryshine, under the name Berry Punch, is a playable character in Gameloft's mobile game. Her in-game description states, "A lover of all delicious drinks that feature a berry twist, Berry Punch is an earth pony who's earned her name!"

Berryshine appears in episode 5 of Fundamentals of Magic, "When Magic Goes Wrong".

In the third wave of mystery pack mini-figure toys and collector cards, a pony named Berryshine shares the show character's coat and mane colors and cutie mark, but is a green-eyed unicorn, using the Rarity design, instead of the cerise-eyed Earth pony as depicted in the show. According to the European version of the card, Berryshine "loves berries". The U.S. version of the card lists Berryshine's name with a trademark symbol and has a longer description reading, "BERRYSHINE loves berries more than any pony!"[9]

A second Berryshine mini-figure toy[10][11][12] and collector card pair was leaked in September 2013 and released in November 2013 as part of the ninth wave of mystery packs, which also list Berryshine's name with a trademark symbol.[13][14] This pony is an Earth pony, using the Pinkie Pie design, with a cerise eye color, matching the attributes of the show character. The U.S. version of this card uses the same description as the previous U.S. collector card. A November 6, 2013 "vorläufige Abbildung" image for mystery packs depicts the show character.

Series 2 of Enterplay's trading cards includes a card featuring Berryshine that refers to her by the name Berry Punch[15] and lists this name with a trademark symbol. Her card is #37 and has a description that reads "Some ponies say she's a little overprotective of her loved ones, but hanging out with Berry Punch is always a good time! She sells a wide variety of drinks made from berries and other fruit, and thanks to her love for her own recipes, Berry frequently slurps down all the profits. She's very close to Minuette and likes to engage in a little friendly competition, like helping with the Running of the Leaves and winning the Sisterhooves Social!" The card lists her likes as "Cider! Cider! Cider! Cider!" and groups her with DJ Pon-3, "Piña Colada" and Minuette.

Berryshine appears on multiple WeLoveFine.com merchandise designs, always along with other characters from the show.

An Enterplay dog tag checklist has listed Berryshine's name as Berry Punch with a trademark symbol.[17]

"I'll give you twice whatever the pony who wants to buy the yellow one is paying!"
— It Isn't the Mane Thing About You

"You really think if we all sing a couple songs, everything will be fine?"
— The Ending of the End - Part 2

"Daring Do is such an exciting hero! I just love her!"
— Rainbow Dash and the Daring Do Double Dare

"I don't know about you, but it takes more than a cup of orange juice to get ME going in the morning."
— Enterplay collectible card game α #20 C card of Sweetie Sunrise

"Whoever said, 'You can lead a pony to water but you can't make them drink,' had NO idea what they're talking about."
— Enterplay collectible card game The Crystal Games #33 F card of Berry Punch

"The sooner we get this done the sooner we can start the party!"
— Enterplay collectible card game Friends Forever #68 R card of Berry Punch 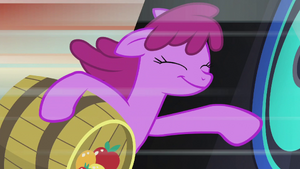