Between Dark and Dawn

Between Dark and Dawn is the thirteenth episode of season nine of My Little Pony Friendship is Magic and the show's two hundred and ninth episode overall.[1] It marks season nine's midseason finale.[2]

In this episode, Celestia and Luna take a "bucket-list" sister vacation while Twilight and her friends struggle to cover the princesses' many royal duties alone.

This episode aired on May 22, 2019, on Cartoonito in Italy, thirty-one days ahead of its scheduled premiere on Discovery Family. It was also released on Ruutu's on demand service on June 14, 2019.[3]

The Royal Swanifying is based on the real-life Swan Upping.[4]

From no help to too much help

The episode begins at Sweet Apple Acres, where a giant turtle is eating all of Applejack's family's apple trees. When Spike is caught by the giant turtle's long tongue and in danger of being eaten, the Mane Six work together to save him and get the turtle to stop eating the trees. Before Twilight Sparkle can teleport the giant turtle somewhere else, Princess Celestia and Princess Luna appear to step in and take over, attacking the creature a few times before teleporting it.

After helping Star Swirl the Bearded protect Ponyville during King Sombra's return, Celestia and Luna have come to enjoy being part of the action and making a difference in ponies' lives from outside the throne room. As a result, they go overboard helping ponies with the simplest of tasks, such as fixing a broken bridge, helping a lost Filly Guides troop, and making cupcakes for Cheerilee's class of foals.

The Mane Six meet at the Castle of Friendship to discuss Celestia and Luna, who seem so overeager to help others that ponies cannot do anything on their own without the princesses intervening. Twilight fears that Celestia and Luna have changed their minds about retiring and do not believe the Mane Six are capable of taking their places as rulers of Equestria. When Celestia and Luna burst in seeking even more action, the ponies tell them that there are plenty of fun things to do aside from trying to be heroes.

Pinkie Pie suggests that Celestia and Luna make a "bucket list" of all the things they ever wanted to try but never had the chance to. When Celestia has doubts about leaving the castle unsupervised, Twilight offers to have her and her friends cover for them as practice for when the princesses finally retire.

At Canterlot Castle, Celestia and Luna excitedly prepare for their impending vacation, but while Celestia craves adventure and excitement, Luna wishes for some relaxation from her dream-watching duties. They decide to take turns doing what they each wish to do during their "sister trip" in order to accommodate both of their desires.

Just before the princesses leave on their vacation, Celestia and Luna gives Twilight and her friends instructions for an upcoming ceremony called the "Royal Swanifying", a celebration and party in honor of all the swans in the royal castle lake. They also entrust Twilight with the task of raising the sun and moon in their absence and give her an amulet imbued with a small portion of their magic to help her with this task. Twilight is particularly determined to show Celestia and Luna that she and her friends can handle whatever the princesses' job requires.

Celestia and Luna set off from Canterlot on their vacation, and through the song Lotta Little Things, they indulge in various activities that they have always wanted to do, including sightseeing, riding rollercoasters, and seeing stage and magic shows. However, while Celestia enjoys the more exciting and thrill-seeking activities, Luna prefers the slower and more relaxing ones.

Back at Canterlot Castle, Fancy Pants, Jet Set, and Upper Crust enter the throne room and discover that the Mane Six have assumed Celestia and Luna's duties for the day. As the heads of the Royal Swanifying Committee, the three aristocrats offer their services to help with the Swanifying ceremony, but Twilight declines their offer. As the offended upper-class ponies take their leave, Twilight tells her friends that accepting help would be the same as admitting they cannot handle Celestia and Luna's jobs on their own.

Meanwhile, Celestia and Luna continue to work through their bucket list, partaking in activities that one of them greatly enjoys and the other does not—zip-lining, cave spelunking, skydiving, and mountain climbing for Celestia, and going to the post office, getting a makeover, and visiting an art museum for Luna. Their disagreement gets so heated that they finally voice their discontent toward each other during a picnic.

Luna accuses Celestia of always wanting things to be her way, going so far as to suggest she wishes Luna was still trapped in the moon so that she could rule Equestria by herself. Celestia argues, however, that Luna refuses to be happy and that she faces the constant pressure of being responsible for both Equestria and her little sister. When the two sisters get so upset that they use the Royal Canterlot Voice on each other, they decide to go their separate ways and enjoy the rest of their vacation alone.

Twilight and her friends struggle to get everything ready for the Swanifying ceremony, and Fancy Pants barges in at various points to voice his concerns and criticisms. Little by little, Twilight and her friends get overwhelmed with all the ceremony-planning duties that continue to pile up. When she wonders how Celestia and Luna handle all of these tasks each year on top of ruling the kingdom, Fancy Pants reveals that the princesses never do all the ceremony planning by themselves, which is why they appoint committees.

At Fancy Pants' suggestion, the Mane Six entrust the individual ceremony-planning duties to members of Celestia and Luna's royal committees. Rainbow Dash tells Upper Crust to prepare the food, Rarity tells Jet Set to retrieve party decorations, and Fluttershy tells Fleur de Lis to handle ponies at the castle gates waiting to get inside. When faced with large piles of garbage to clear away, Pinkie Pie recruits the help of the giant turtle from the beginning of the episode.

"So this is how you rule Equestria!"
— Twilight Sparkle

On a sunny beach without Celestia, Luna finally gets to relax like she wanted. However, when she sees other sister pairs having fun together on the beach, she starts to get lonely and ends up getting severely sunburned. Meanwhile, Celestia goes skydiving and exploring in a forest, but she gets lost without Luna's better sense of direction and frightened by animals that Luna would usually scare away.

The two sisters accidentally cross paths while climbing Mount Filly-mane-jaro, Luna wishing to see the sunrise and Celestia wishing to see the moonset. Despite their earlier argument, they agree to climb the mountain together. At the top of the mountain, they watch the sunrise and moonset side-by-side. Celestia and Luna admit to each other that, for all the grief they give one another, each of them cannot bear living without the other, and they apologize for the harsh words they said.

At the scheduled time for the moon to set and the sun to rise, Celestia and Luna notice the sun and moon moving wildly and uncontrollably in the sky and quickly realize that Twilight is having trouble with the sun/moon amulet they gave her. At the castle, Twilight tries to reset the amulet with a tool that Sunburst gave Spike, but she accidentally breaks it. The episode ends with Celestia and Luna flying back to the castle while Twilight cries out for some adhesive tape.

Twilight Sparkle: Remind me how this happened again!
Applejack: And why there's a giant turtle eatin' my family's entire summer crop!
Fluttershy: Oh, dear. Mr. Tortoise-Snap said he was hungry. But he promised me he would only take a few small bites.
Rainbow Dash: I don't think that thing knows what "small" is.

Princess Celestia: Halt, interloper!
Princess Luna: Stay back, friends! My sister and I will take care of the beast!
Rainbow Dash: All the times we've actually needed their help, and they show up for this?

Princess Celestia: We have put a small part of our power in this amulet. You can activate it with your magic at any time. Preferably dawn and dusk.
Pinkie Pie: Ooh! That's not a terrifying level of responsibility or anything!

Princess Celestia: Remember, sister. From now on, we are regular, carefree ponies!
Princess Luna: We're leaving the princess life behind, and we're not even going to fly!
Princess Celestia: Of course. [laughs] How new and different. It's just like Pinkie Pie said.

Princess Luna: Well, I'm glad you enjoyed yourself. But now, we're going to do something I've always wanted to do but never could because of my night shift.
Princess Celestia: Is it another zip line?
Princess Luna: No. It's the post office!

Princess Luna: [gasps] The sun and the moon together? At the same time?
Princess Celestia: Now, where have I seen that before?

Spike: Okay, okay! I think I got it! Sunburst says we just need to reset the amulet with this! Turn the screw on the back—
[cranking]
[sproing!]
Spike: ...and no more than one half turn.
Twilight Sparkle: [whimpers] Does anypony have some tape?! 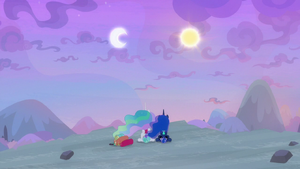 Between Dark and Dawn image gallery