Big Boy and Runt are two gremlins who first appear in My Little Pony Micro-Series Issue #2 as antagonists and later cameo in other IDW comics. They are referred to only as gremlins in their debut issue and as cloud gremlins in the publicity summary of the issue,[1] but their individual names have been mentioned by the issue's writer Ryan K. Lindsay.

Ryan K. Lindsay, the writer of My Little Pony Micro-Series Issue #2, has stated "I did try to bring a pompous level of evil to my gremlins and I’m really pleased with how they’ve come out. My artist on the issue, Tony Fleecs, has done an amazing job bringing these creatures to terrifying life",[2] and has also stated "The gremlins were especially pompous - I wanted to write them like old Stan Lee villains, almost caricatures of evil pomp. Their lines are all excruciatingly overwrought and that was intentional - it doesn't mean you have to like it, I just wanted you to know my process about it. Also, their names are Big Boy and Runt - you can guess which is which... ;) - it would be my dream to have these characters transport across into th[sic] show, though I'm not holding my breath, and I do know exactly what they sound like, too. I also think Tony's design for them is absolutely THE BEST."[3]

In an April 1, 2014 comment on DeviantArt, artist Tony Fleecs identifies Big Boy (the larger gremlin) and Runt (the smaller) by name and size.[4]

Big Boy and Runt are introduced in My Little Pony Micro-Series Issue #2. They initially appear as a monstrous thunderstorm, but eventually reveal their true forms to Rainbow Dash. When they generate a magical cloud over Ponyville, it saddens everyone that lives there, feeding Big Boy and Runt and making them stronger. Rainbow Dash attempts to get rid of the cloud, but the cloud gremlins thwart her every attempt. She eventually defeats them and brings sunshine back to Ponyville by pulling off a sonic double rainboom.

Human counterparts of Big Boy and Runt appear in My Little Pony Annual 2013 and on page 34 of the My Little Pony: Equestria Girls Holiday Special. Here, their sizes are switched.

On page 5 of My Little Pony Micro-Series Issue #4, one of the objects in Fluttershy's Chamber of Extreme Knitting is a knit piece resembling Runt. In Friends Forever Issue #7, Pinkie Pie and Princess Luna dress up in a large Big Boy costume to scare one of the royal guards. Nightmare visions of Big Boy and Runt appear on My Little Pony: FIENDship is Magic Issue #4 page 18. On Friends Forever Issue #9 page 12, a plush doll of Big Boy appears in Flim's flashback.

Big Boy is a character named “Cloud Gremlin” in Gameloft's mobile game, and serves as a boss during the "Hearts and Hooves and Claws Day" event. He has a story role in the event, in which he moves his cloud above the home of the Breezies and abducts Seabreeze. His bio states, "A Cloud Gremlin--and a real piece of work, too. What's it to ya?" 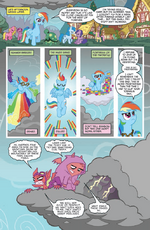 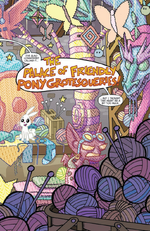 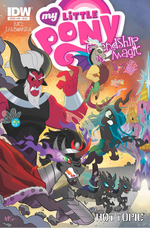 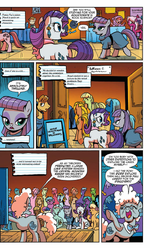 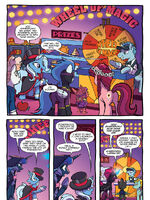 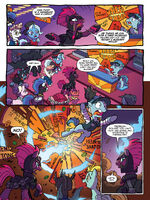 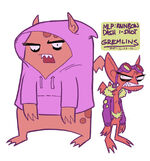 Concept art of the cloud gremlins