My Little Pony Friendship is Magic Wiki
Register
Don't have an account?
Sign In
Advertisement
in: Character gallery pages

In his first appearance, his cutie mark sparkles. The ponies in the background are Sweetie Drops, Golden Harvest, and Shoeshine.

We've been teaching her to carry oversized cakes on her back.

She changed her mind!

Big McIntosh and his sister overlooking the apple orchards.

"Are you sayin' my mouth is makin' promises that my legs can't keep?"

"That's still only one pony, and one pony plus hundreds of apple trees just doesn't add up."

"Don't you use your fancy mathematics to muddle the issue! I said I could handle this harvest, and I'm gonna prove it to you!"

"I'm gonna get every last apple out of those trees this applebuck season..."

Coming by the big brother.

We're ready, they won't pass us.

Telling AJ about the lost grass.

Big Mac standing beside Caramel while the ponies argue.

Helping with the nests.

Filly Applejack leaving from the farm

The Return of Harmony, Part 2

Big McIntosh falls under the spell.

Big McIntosh is chased by the CMC.

You ponies will never get this doll!

Take Off! Time to run away!

Big Mac, in the background.

Big Mac, on the side watching Princess Luna.

Granny, you're doing it wrong. 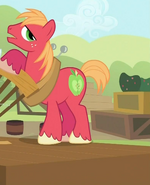 Big McIntosh after helping Granny Smith with her Charley horse.

So, we're a traffic signal?

Well in that case, that's an "Eeyup".

Having a cool serious expression.

Setting up a surprise party to welcome Applejack back from the rodeo.

Big McIntosh feeling reassured that Twilight and the others will return with Applejack.

Big McIntosh happy and proud to be serving the Apple Family Cider.

Who the hay invited you into our huddle?

Big McIntosh and his family shocked by the Flim Flam brothers running them out of business.

She'll be all right.

Big McIntosh determined to take on Flim and Flam.

Big McIntosh and Rainbow Dash working as hard as they can!

"Are you talkin' about my brother?"

Uh, is somepony watching me?

Ha ha ha! Twilight wouldn't just impulsively give them a book she was reading!

Big McIntosh with his special somepony.

Why are you so far!?

They're getting married now!?

Cheerilee: "Girls, can you explain why it looks like I'm getting married at the bottom of a pit?"

"You should be ashamed of yourself...

MMMystery on the Friendship Express

Big McIntosh has agreed to carry the cake

And don't let anypony poach that cake, got it?