Big McIntosh's human counterpart appears in the My Little Pony Equestria Girls franchise. He is a graduate student[1] of Canterlot High School and a member of the Wondertones.

In My Little Pony Equestria Girls: Rainbow Rocks, Big Mac appears during Better Than Ever as Photo Finish takes a picture of him of near the statue, followed by adding the Cutie Mark Crusaders, Snips, Snails, and Trixie into the shots. Big Mac also appears to answer, "Nnope" in comment towards the poorly performed song the Rainbooms rehearse at Sweet Apple Acres.

In Shake your Tail!, Big Mac appears watching the Rainbooms at the dance carrying Apple Bloom on his shoulders. In Perfect Day For Fun!, he appears at the Canterlot High School carnival with Cheerilee and watches the Rainbooms' concert. He later poses for a smartphone picture along with Cheerilee, Scootaloo, Sweetie Belle, Apple Bloom, DJ Pon-3, Vice Principal Luna, Spike, and Trixie.

In the Equestria Girls half-hour special Dance Magic, Big Mac briefly appears when the Mane Seven wash his car for their car wash.

In the animated short Steps of Pep, Big Mac appears as the bass singer for the student band, the Wondertones, alongside Rarity, Toe-Tapper, and Torch Song. He is also mentioned by Applejack in Epic Fails. In Get the Show on the Road, he serves as the Rainbooms' bus driver when they go on tour.

In the Better Together short Queen of Clubs, Big Mac appears on the Canterlot High School role-playing game club with Trixie, Snips, and Snails. In Five to Nine, he makes a cameo appearance in the Apple family home as Applejack slides down the handrail for the stairs past him, and shrugs as she greets him and exits the house. He later alerts her to her friends' arrival later that night for her party inside the barn. In the second season short Do It For the Ponygram!, catching Applejack as she slides off the handrail, leaving them both dazed in a blooper from "Five to Nine".

In the Choose Your Own Ending short Fluttershy's Butterflies, Big Mac appears in the Applejack ending getting flocked by chickens.

In the second season, Big Mac appears in the Applejack ending of Wake-Up!, confirming when Applejack tells Sunset that he always says "nothin' starts the day off like a little bit of hard work" on the second day of the Starswirled Music Festival. She later clarifies that he does so more laconically. He is a possible ending in The Last Drop, in which he is invited on stage by DJ Pon-3 for an interactive experience during her set at the festival. He is given a banjo and they produce a country/techno sound that impresses the audience.

Big Mac appears waiting in the security line at the Starswirled Music Festival talking to Photo Finish. Big Mac also gets mentioned by Applejack as she tells a joke about him and a chicken coop.

In "Saving Pinkie's Pie", Big Mac takes part in a big snowball fight. In "The Cider Louse Fools", Twilight Sparkle helps Big Mac and his family outwit the Flim Flam brothers when they try to swindle them out of their holiday-time cider. In "Dashing Through the Mall", he makes a background cameo at the Canterlot Mall. In "O Come, All Ye Squashful", he appears in past Apple family photos on Applejack's phone.

In the My Little Pony: Equestria Girls Holiday Special comic, Big Mac appears on pages 34, 47, and 48. 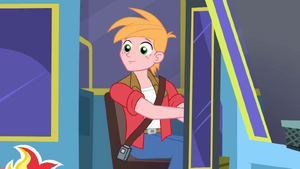