Bill Neigh is a male Earth pony professor with a gray coat, white mane and tail, and blue eyes. He appears in the episodes The Crystal Empire - Part 1, Trade Ya!, and Spice Up Your Life and in the IDW comics' Micro-Series Issue #7. He is unnamed in the show and other media, being called simply "Professor" in the credits and in Gameloft's mobile game, but he is named in merchandise.

Bill Neigh shares his mane style and sometimes glasses design with Ginger Beard and his color scheme with Roger Silvermane. On June 11, 2016, Jim Miller was asked "Was that an Alton Brown-inspired pony? pic.twitter.com/gvyxWLS3i0" and answered "Not specifically."[5] His name is a play on Bill Nye.

Bill Neigh first appears during The Failure Song in the season three episode The Crystal Empire - Part 1. He is seen in a Canterlot room that matches the design of the School for Gifted Unicorns room shown in The Cutie Mark Chronicles. He checks Twilight Sparkle's recitation of the square root of 546 being 23.36664289109 and subsequently proclaims "She is correct!" The episode's ending credits mistakenly credit Andrew Francis for the voiced role;[6] Jayson Thiessen and Daniel Ingram have stated that he is voiced by Jayson Thiessen.

Bill Neigh later appears in the season four episode Trade Ya!, managing a stall at the Rainbow Falls Traders Exchange and appearing at several points throughout the episode; in two such shots, he is seen conducting trades with Joe. He makes some background appearances in the season six episode Spice Up Your Life and the season nine episode The Point of No Return.

Bill Neigh is a playable character called "Professor" in Gameloft's mobile game, added to the iOS version of the game on December 9, 2013 and to the Android version on December 17, 2013. His in-game description states "Professor is a very smart earth pony with a molecule for a cutie mark. He always has some square roots to calculate!"

In Enterplay's collectible card game, Bill Neigh is named on his card, the Gen Con Indy 2013 demo version of which names him "Bill Neigh" with a trademark symbol and the α #52 C and α #ƒ21 versions of which name him "Professor Neigh". All three versions of the card attribute to him the quote "Now if you'll excuse me, I have some square roots to calculate. See ya!"

"Now if you'll excuse me, I have some square roots to calculate. See ya!"
— Enterplay collectible card game Gen Con Indy 2013 demo card of Bill Neigh and α #52 and α #ƒ21 cards of Professor Neigh 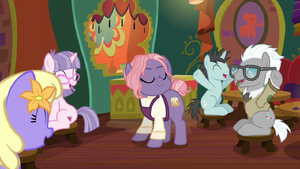