Bittersweet[2] and Leadwing[3] are two background ponies, the former a female unicorn and the latter a male Earth pony, who appear in Princess Spike and the IDW comics. Bittersweet has a lime green coat, gold mane, blue-green eyes, and a cutie mark of a speech bubble with a heart inside. Leadwing has a blue coat, deep blue mane, dark blue eyes, and a cutie mark of a pencil with bat wings. They are the respective original characters of IDW Publishing writer Katie Cook and artist Andy Price.

In the show, Bittersweet and Leadwing first appear in the season five episode Princess Spike as delegates at the Grand Equestria Pony Summit, Bittersweet being a delegate for DeTrot.[1] The two have no lines of dialogue, but they are among the summit delegates prominently featured. Bittersweet also briefly appears outside the Manehattan train station in Made in Manehattan.

In the special-edition comic The Stage, featured in Synergy: A Hasbro Creators Showcase, Bittersweet and Leadwing appear on a television as depicted in Princess Spike.

In My Little Pony: Friendship is Magic Issue #102, Bittersweet and Leadwing appear on page 27 being rescued by Capper and his friends as Canterlot crumbles apart.

Bittersweet is a character in Gameloft's mobile game. The game's description of her states, "A proud delegate for the land of DeTrot, she reps her fair city with kindness and thought." 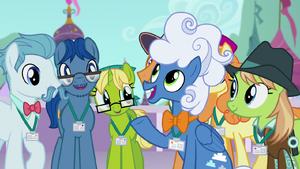