Blaze is a female Pegasus pony and a member of the aerial acrobatics group, the Wonderbolts. She first appears in The Ticket Master, and she has a speaking role in Rarity Investigates!

In Sweet and Elite, Blaze participates in the Wonderbolts Derby. In Secret of My Excess, she appears as one of the Wonderbolts fighting against a monstrous Spike alongside Surprise and High Winds. At one point, she shears off Spike's spines. Spike traps her and her fellow Wonderbolts inside a water tower. Near the end of the episode, when they're finally freed, Blaze trembles with fear before striking a heroic pose and flying off with Surprise and High Winds.

In Hurricane Fluttershy, a picture of Spitfire bears somewhat of a resemblance to Blaze.

Blaze later appears in Rainbow Falls watching the Cloudsdale cheerleaders. In Castle Sweet Castle, Rainbow Dash decorates Twilight Sparkle's castle with a Blaze figurine. Blaze also appears in a photograph of Manehattan in Party Pooped. In Rarity Investigates!, Blaze appears as one of the central Wonderbolts featured. She has a speaking role, and she is addressed by name for the first time in the series.

In Newbie Dash, Blaze appears among other members of the Wonderbolts, including newest full member Rainbow Dash. Blaze's photo appears in the classroom in Top Bolt.

In season seven, Blaze briefly appears flying with other Wonderbolts in Marks and Recreation and with Misty Fly in Secrets and Pies.

In season eight, Blaze appears performing with the other Wonderbolts in The Washouts, and helping Sludge fly alongside Fleetfoot in Father Knows Beast.

In season nine's episode Between Dark and Dawn, Blaze appears as one of the Wonderbolts Princess Celestia and Princess Luna ride on top of during Lotta Little Things. In The Ending of the End - Part 2, Blaze and the other Wonderbolts take part in the final battle against Queen Chrysalis, Lord Tirek, and Cozy Glow.

Blaze appears with the rest of the Wonderbolts during the Friendship Festival in My Little Pony The Movie, and later among the ponies captured by the Storm Creatures.

Human world Blaze is mentioned in Rainbow Dash Brings the Blitz and appears in Twilight Sparkle's Science Fair Sparks. In Rainbow Dash Brings the Blitz, Comet Chaser is stated to have "stolen the ball from Blaze and scored the winning goal" of the Blitzball "championship game from a decade before" and says that "Blitzball has always been an all-male sport. In the twenty-year history of the game, there’s never been a female player." In Twilight Sparkle's Science Fair Sparks, Flash Sentry's partner in the Canter-Crys science fair is "a boy from Crystal Prep named Blaze."​[​specify​]​

Blaze is a character in Gameloft's mobile game, and serves as a boss during the "Wonderbolt for a Day" event. She also appears prominently in the 2018 Hearts and Hooves Day event storyline, where she helps Feather Bangs' admirers with each of their stresses, and she later starts a romantic relationship with Feather Bangs after agreeing to be his "special somepony". The game's description of her states, "This Wonderbolt veteran is one cool customer. When your average airspeed is THAT fast, it's hard not to be!"

Blaze is first named without identification in the My Little Pony guidebook The Elements of Harmony.

BLAZE doesn't worry about much. She's a sleek sky torpedo after all. On a good day, no one can catch her as she zooms across the sky—most days are good days.

"I did see you and Spitfire leave the dinner together."
— Rarity Investigates!

"We looked everywhere, but Spitfire wasn't at her mom's house!"
— Rarity Investigates!

"Pardon me, fillies. When I'm not doin' aerial stunts for Bits, I kind of just float around and listen in on interesting conversations... but I might actually have some advice for you."
— My Little Pony (mobile game)

"Feather Bangs... I think you've proven by now what an awesome dude you are. I'd be really, really happy to be your special somepony. Let's give it a try, yeah?"
— My Little Pony (mobile game) 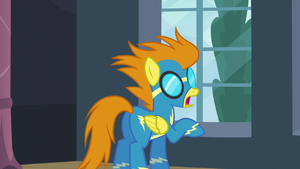