Bloom & Gloom (spelled as Bloom and Gloom by some sources) is the fourth episode of the fifth season of My Little Pony Friendship is Magic and the ninety-fifth episode overall. The title is a play on the phrase "doom and gloom."

In this episode, Apple Bloom's anxiety over not having her cutie mark turns her life into a nightmare.

The forest clearing, used both for this episode and for the film My Little Pony Equestria Girls: Friendship Games, was previewed in a background image shown online by November 2014.[1] Pest Control Pony[2] was previewed in one of the animation images shown at Ponycon NYC on February 16, 2015.[3]

On March 3–5, 2015, an unofficial My Little Pony: Friendship Is Magic[sic] season 5 episode listing on IMDb titling the fourth episode as "Fall Me Out" was discredited by Jim Miller.[4][5][6][7]

The twittermites were designed by Rebecca Dart, Kora Kosicka, and Fernanda Ribeiro;[8] Kosicka also added in the little skeleton gag scene of when Apple Bloom's heart was an apple during her electrocution by a small swarm of twittermites.[9] The melody of the lullaby Applejack sings to Apple Bloom was ad libbed by her voice actress, Ashleigh Ball,[10] with backing music created by score composer William Anderson.[11] The pancakes were made by character and prop designer Charmaine Verhagen.[12]

A letter from Babs

In the Cutie Mark Crusaders' clubhouse, Apple Bloom calls a Crusader meeting to order and reveals in a letter from Manehattan that her cousin Babs Seed finally got her cutie mark—a pair of scissors.

While the Ponyville Crusaders are happy for her, they wonder who will run the Crusaders' Manehattan branch in Babs' place. Scootaloo states matter-of-fact that "she can't be a Cutie Mark Crusader if she's already got her cutie mark." Sweetie Belle even imagines receiving a cutie mark that one doesn't like. Considering the apple-themed cutie marks in Apple Bloom's family, Scootaloo lists off several negative possibilities for such a cutie mark, making Apple Bloom fraught with worry.

Apple Bloom's cutie mark-related anxieties persist until nightfall—she worries whether she'll like her cutie mark, what will become of the Crusaders, and if she'll have to leave the Apple family if her cutie mark isn't an apple. As Applejack tucks Apple Bloom into bed, she assures her through lullaby that a cutie mark won't change her no matter what she gets. Comforted by Applejack's song, Apple Bloom drifts off to sleep.

The next morning, a well-rested Apple Bloom meets Applejack in the kitchen for breakfast. Once there, the two Apple sisters are shocked to discover that Apple Bloom got her cutie mark—a bug spray can spraying apple mist. As Apple Bloom voices her excitement at finally getting her cutie mark, an Earth pony stallion with a similar cutie mark enters. The stallion, a "pest pony," instructs Apple Bloom in the basics of pest control and informs her about a particularly dangerous species of insects called twittermites. With Apple Bloom taking up the pest pony mantle, the pest control stallion can finally retire.

After receiving ridicule from Diamond Tiara and Silver Spoon, Apple Bloom runs away into a dark forest, unsure if she wants her cutie mark. A voice suddenly calls out from the shadows, offering to take Apple Bloom's cutie mark away. Apple Bloom accepts, and a gust of wind erases the mark from her flank. When Apple Bloom returns to Ponyville, the town is in chaos due to a twittermite swarm. Without her pest control cutie mark, Apple Bloom is unable to stop the swarm from destroying Sweet Apple Acres.

Upon getting zapped with electricity by the swarm, Apple Bloom wakes up in her bed, relieved to find that the entire ordeal was a dream. She goes to meet Applejack for breakfast and, just like in the dream, the two discover that Apple Bloom got her cutie mark—an apple potion. Apple Bloom dashes to the clubhouse to inform Scootaloo and Sweetie Belle, who unfortunately have not received their own cutie marks yet. Because of this, Scootaloo and Sweetie Belle no longer consider Apple Bloom a Crusader or their friend, and they kick her out of the clubhouse.

Apple Bloom is suddenly returned to the dark forest, where the voice from earlier speaks to her again. Apple Bloom believes being a blank flank again will keep the Crusaders together, and the voice grants her wish, removing her cutie mark a second time. She returns to the clubhouse to resume crusading with her friends, but this time, Scootaloo and Sweetie Belle have gotten their cutie marks. They depart to take on their responsibilities, ditching Apple Bloom as their friend and leaving her as the only Crusader remaining.

Apple Bloom wakes up in her bed a second time. Frazzled by her concurrent nightmare, she meets Applejack for breakfast once again. Like before, Apple Bloom has her cutie mark. However, as Applejack, Big McIntosh, and Granny Smith come to realize, Apple Bloom's cutie mark is a dolphin. For having a non-apple-related cutie mark, Apple Bloom is disowned by the Apple family and cast out into the lonesome darkness.

Upon waking in her bed a third time, Apple Bloom looks in the mirror and is relieved that she doesn't have a cutie mark. As soon as she turns around, however, numerous cutie marks appear on her flank and in the air around her. Hysterical, she runs out of her bedroom and winds up in the dark forest once more. The voice in the shadows speaks out again, and Apple Bloom tells it to stop tormenting her with nightmares. As she gallops away, Apple Bloom encounters Princess Luna, who reveals that the entity Apple Bloom has been talking to this whole time was her own shadow.

With Princess Luna's advice, Apple Bloom faces her cutie mark fears and accepts that it doesn't matter what her cutie mark turns out to be. She feels embarrassment for learning such a simple lesson, but Luna assures her that she isn't the only pony with such anxieties. She shows Apple Bloom nightmares that Sweetie Belle and Scootaloo are having—nightmares in which they also receive cutie marks they don't want.

Luna brings the three together in a dream version of the Crusaders' clubhouse. Apple Bloom, Sweetie Belle, and Scootaloo learn that a cutie mark won't change who they are and that, when they finally do get their cutie marks, they'll fit them perfectly. Wondering if Babs is suffering the same anxieties, the Crusaders decide to send her a care package to let her know that she isn't alone.

"A cutie mark won't change you"

The next morning, Apple Bloom wakes up in her bed. Looking at her bare flank, she sighs in relief that the nightmare is finally over. She meets her family for breakfast and briefly joins in a reprise of Applejack's earlier lullaby. Applejack gives the sentiment that "a good night's sleep cures just about everything," with Apple Bloom adding that she wishes it wasn't so exhausting. Her remark leaves puzzled expressions on her family's faces.

Sweetie Belle: Can you imagine getting stuck with a cutie mark you didn't like?
Apple Bloom: No... or at least I hadn't...
Sweetie Belle: Don't worry, Apple Bloom. Most of your family has apple-related cutie marks. I bet yours will be, too. And what's not to like about apples?
Scootaloo: There's the core, and sour apples, and rotten apples, and apples with worms in them— What?
Sweetie Belle: Not helping.

Apple Bloom: If I've been dreamin' this whole time, why don't I just wake up?
Princess Luna: Sometimes we can worry about a thing so much, the fear can make us feel we're trapped in a nightmare.

Apple Bloom: I know we all got pretty anxious when we found out Babs got her cutie mark, but I for one don't want to have nightmares every night from now until we get ours!
Scootaloo: Me neither!
Apple Bloom: And even though we're all a little scared, a cutie mark won't change who we are or how everypony feels about us!
Sweetie Belle: It's lucky we're all scared of the same things. That way we can help and remind each other to just be who we are!
Princess Luna: And when the day comes that you all finally get your cutie marks, you can be sure they'll fit you to a T. 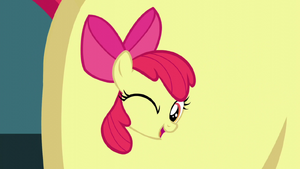