For the pony listed as Blossomforth in the credits of the episode Rainbow Falls, see Helia.

Blossomforth is a Pegasus pony who appears in the episodes Hurricane Fluttershy, Rainbow Falls, Inspiration Manifestation, and The One Where Pinkie Pie Knows and in the IDW comics' Friends Forever Issue #9. She has a very light pink coat, a mane streaked cerise and mint green, bright blue eyes, and a cutie mark of two flowers. She shares her design, eye color, and in some merchandise cutie mark with Helia and has a mane design similar to Twilight Sparkle, Sweetcream Scoops, and Lovestruck.

Blossomforth shares her name with a G3 Earth pony. The G4 character first appeared in the toy line; one of the show's layout artists has identified her as a "from toy to show character".[3] The role of Helia voiced by Kelly Metzger in the season four episode Rainbow Falls was scripted as Blossomforth,[2] and this pony name was not changed for the finished episode's closing credits.

Blossomforth first appears in Hurricane Fluttershy during the training scene, contorting herself uncomfortably on the race track, to which Rainbow Dash comments "A little too much flexibility, Blossomforth" and tells somepony to give her a helping hoof. She appears again later alongside Thunderlane when the Pegasi are preparing to measure their wingpower. When Twilight Sparkle blames Thunderlane for coughing, he protests that it was Blossomforth, who soon coughs.

Blossomforth is listed in the credits of the season four episode Rainbow Falls as being voiced by Kelly Metger,[sic] but does not speak in the finished episode. Instead, Kelly Metzger voices a similar-looking pony, while Blossomforth appears in the background.

Blossomforth also appears in Inspiration Manifestation, where she is blinded by the golden ground which Rarity created. In The One Where Pinkie Pie Knows, she appears next to Thunderlane during a lakeside party.

Blossomforth appears in the third wave of Playful Ponies, the second wave of mystery packs, the Toys "R" Us exclusive Friendship Celebration Collection, and the second wave of Water Cuties. According to the toy line, Blossomforth "loves the sunshine! It's her job to push the clouds out of the sky whenever they hide the sun for too long." The Friendship Celebration Collection toy package has a different description and reads, "BLOSSOMFORTH and FLOWER WISHES have a tea party for two!"

Blossomforth also appears on the Season 2 poster/DVD set packaging/T-shirt front/WeLoveFine.com iPhone case; when her cutie mark is shown, it is the same sunflower as Helia's instead of the usual. Little, Brown's My Little Pony Friendship is Magic official guidebook My Little Pony: The Elements of Harmony lists Blossomforth by name and appearance.[4] Blossomforth's Enterplay collectible card game Canterlot Nights expansion set card #84 R shows her contorted as in Hurricane Fluttershy and lists the quote "Uh... li'l help?" 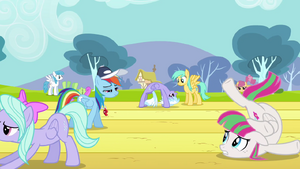