Blue Moon and North Star are two blue ponies, the former a unicorn and the latter a Pegasus, who have been a dating couple. Blue Moon appears unnamed in three My Little Pony Friendship is Magic episodes and appears named in the Ponyville Mysteries chapter books Schoolhouse of Secrets and The Tail of the Timberwolf and in mobile and collectible card games; North Star appears named in the chapter book Daring Do and the Forbidden City of Clouds.

North Star has the same name and is of the same pony tribe as a G1 Pegasus mare.

Blue Moon, with his stars cutie mark, later appears at a Maretropolis street in Power Ponies and within the Equestria Games audience at the Crystal Empire stadium in the season four episode of the same name.

North Star appears at the San Palomino Desert in Daring Do and the Forbidden City of Clouds chapters 1-2, as one of the Wild Bunch Gang stallions who attempt to steal the Doomed Diadem of Xilati that Daring Do is carrying.

Blue Moon, with his stars cutie mark, appears outside at Canterlot in the footer background of a former Hub web page on Promotions.com for Castle Creator.[2]

Blue Moon, with his compass rose cutie mark, is a character in Gameloft's mobile game.[1] His in-game description states "Blue Moon is a suave-suited unicorn that sparkles night and day as he trots across Equestria."

North Star: Look here, lil' lady!
North Star: You expectin' us to leave the treasure when we...uh...need it?! I mean, we should get it 'cause you have it, and we're wantin' it and, uh...
Slingshot: I think what my buddy here is trying to say is that we ain't goin' back empty-hoofed!
North Star: Yeah!
North Star: Full-hoofed!
— Daring Do and the Forbidden City of Clouds

North Star: What a load of rotten hay!
North Star: I'm real tired of talkin', Sling. Next thing ya know, she's gonna be sayin' that the Halo in the Sky is real, too. And everypony knows it ain't—
— Daring Do and the Forbidden City of Clouds 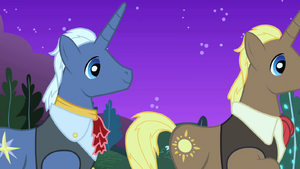 Retrieved from "https://mlp.fandom.com/wiki/Blue_Moon_and_North_Star?oldid=1990100"
Community content is available under CC-BY-SA unless otherwise noted.