My Little Pony Friendship is Magic Wiki
Register
Don't have an account?
Sign In
Advertisement
in: Earth ponies, Female characters, Pages that need improvement,
and 2 more

Blueberry Curls is a female background Earth pony with a pale yellow coat, blue mane and tail, turquoise eyes, and a cutie mark of two pink-petaled flowers. She is unnamed in the show, but she is named in merchandise. She has two minor speaking roles in the season five episode Made in Manehattan and season eight episode Fake It 'Til You Make It.

Blueberry Curls first appears in the season four episode Power Ponies, in an overhead shot of the city of Maretropolis. She then appears in various shots in Rarity Takes Manehattan, in line to see Hinny of the Hills at one point. In Pinkie Pride, Blueberry Curls appears as a filly during Cheese Sandwich's flashback. She also watches the Equestria Games in the episode of the same name.

In season five, Blueberry Curls rides the Friendship Express train in Party Pooped. In Made in Manehattan, she appears in the company of her foal and watches the Midsummer Theater Revival. Here, she has a brief speaking role with a Hispanic accent.

In season six, Blueberry Curls briefly appears in The Gift of the Maud Pie, The Saddle Row Review, and Viva Las Pegasus.

In season eight, Blueberry Curls appears as a customer at Rarity For You in Fake It Til You Make It. She also has a brief speaking role with a hipster accent. In Molt Down, she appears as part of a School of Friendship tour group.

Blueberry Curls is a character in Gameloft's mobile game, and acts as an enemy minion in the "Fake It 'Til You Make It" boss battle event. Her bio states, "This native Manehattanite has strong opinions about both fashion and musical theater. You don't even have to ask her what they are. She'll tell you anyway!"

Blueberry Curls is named with a trademark symbol in the nineteenth wave of mystery pack toys and collector cards. She also appears on the Season 4 poster between Maud Pie and Hinny of the Hills.

"Watch it!"
— Made in Manehattan

"I dunno, sugar, looks like some kinda play."
— Made in Manehattan

"Oh, alright, I suppose we could stay for a minute."
— Made in Manehattan

"Ooh, striking dress, Rarity. I certainly hope you aren't trying to undercut the Royal Fashion Show by ducking out and debuting it here."
— Fake It 'Til You Make It 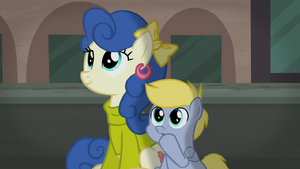