Boast Busters is the sixth episode of the first season of My Little Pony Friendship is Magic. In this episode, a new unicorn going by the name of "The Great and Powerful Trixie" arrives in Ponyville, claiming to be the greatest pony in all of Equestria. The title of the episode is a play on the title of the Ghostbusters franchise.

The episode's premise called for a boastful boy unicorn, but writer Chris Savino came up with the character Trixie instead.[1]

Magnet Bolt, Cherry Spices, Electric Sky, "Rivet", and Barber Groomsby were to appear in the episode.[2]

This is the first episode of the show to not have all of the main ponies talk. Pinkie Pie and Fluttershy only appear sporadically in the crowd.

When this episode aired on Treehouse TV in Canada, an entire sentence with the word "loser" was muted in the scene where Trixie is taunting Rainbow Dash.

This is the last episode to have a fancier font on the closing credits, as every other episode starting with Dragonshy uses a bland credit font.

Introduction: A new unicorn in town

The episode begins in Golden Oak Library, where Twilight Sparkle successfully performs the last spell of a set of twenty-five. The spell, called "growing magic", gives Spike a mustache. Spike hopes to show it to Rarity, but Twilight says that it is just for practice and makes it disappear.

Later, Twilight and Spike go for a stroll. Twilight says that most unicorns only have a little magic suited for their special talent. Spike points out that Twilight's talent is magic and praises her vast knowledge. However, Twilight modestly denies having more magical ability than any other pony in Equestria. Their conversation is cut short when Snips and Snails spread the word that a new unicorn with unrivaled powers has arrived in Ponyville.

The Great and Powerful Trixie

"Well, well, well. It seems we have some "neigh-sayers" in the audience. Who is so ignorant as to challenge the magical ability of the Great and Powerful Trixie?"
— Trixie

In the town square, a stage unfolds from a trailer as a booming voice announces the arrival of the "The Great and Powerful Trixie". Trixie claims to be the most magical unicorn in all of Equestria and sets off some fireworks, impressing the citizens. Twilight's friends, however, are unimpressed. Twilight asks if there is something wrong with being talented. Applejack and Rarity tell her that there is nothing wrong with talent, as long as you do not boast. When Spike tries to say that Twilight is more magical than Trixie, Twilight stops him, telling him that she doesn't want her friends to think she is boastful. When Rainbow Dash demands to know what makes Trixie so special, she claims that she once saved the town of Hoofington from an "ursa major" by sending it back to the Everfree Forest. She then challenges anyone in Ponyville to step up, saying that she can surpass anyone’s abilities.

Applejack accepts the challenge and performs a rodeo rope trick. Trixie makes the rope imitate a hypnotic snake that hog-ties Applejack. Rainbow Dash then gathers moisture from clouds to create a mini-rainbow, but Trixie uses magic to whirl the rainbow into a funnel and trap Rainbow Dash in it, spinning her around until she is dizzy. Rarity declines the challenge, saying that she is "above all this nonsense". But when Trixie insults her mane, she decides to demonstrate elegance by creating a costume out of stage curtains. Trixie uses her magic to turn Rarity's hair into a mottled slime-green mess with a stick and two rats' tails poking out of it. Rarity runs off in humiliation, crying, “Such an awful, awful color!” A green-haired variation of Golden Harvest frowns and says, “Well I never!” Spike tries to convince Twilight to confront the arrogant unicorn. Trixie overhears him and challenges Twilight, but Twilight runs away. With no one left to face her, Trixie declares herself to be “the most amazing unicorn in all of Equestria.”

After the show, Snips and Snails deliver a smoothie to Trixie with extra hay, "just how [she] likes it". The colts want to hear how she defeated an ursa major, but Trixie brushes them off, telling them she’s exhausted. A skeptical Spike meets the two colts, saying that proof is needed to verify Trixie's claim. Snips gets the idea of finding an ursa major in the Everfree Forest.

Back at the library where Twilight is studying, Spike tries to convince her that she can use her magic to stand up to Trixie and help her friends. However, Twilight fears she would be no better than Trixie and might end up losing her friends by showing off. Spike is frustrated about the situation and leaves.

In the forest, Snips and Snails find a giant blue bear in a dark cave, but they accidentally wake it up and lead it back to Ponyville. They wake up Trixie, who panics upon seeing the bear. The bear crushes Trixie's trailer after Trixie runs away with the two colts. After a few failed attempts to stop it, Trixie finally confesses that she had never vanquished an ursa major before.

Before the bear can wreak serious havoc on Ponyville, Twilight (who was alerted by Spike) finally uses her magic. Using the wind and cattails to play a lullaby, she soothes the creature. She levitates a water tower, fills it with milk by passing it through a barn full of cows, and feeds the milk to the bear. As the bear drifts off into a deep sleep, she magically carries it back to the forest.

Twilight’s friends dismiss Trixie as a loudmouth and praise Twilight’s magical abilities. Twilight asks her friends if they mind her magic tricks, and Applejack reassures her that her magic is a part of who she is, and that they are proud to have such a powerful, talented unicorn as their friend. Twilight explains that the bear was actually an ursa minor, a younger version of the ursa major.

Refusing to admit she was outdone, Trixie says that Twilight will never have the same "amazing, show-stopping ability" as she does. Trixie conjures a puff of smoke that poorly conceals her hasty departure from the town. Rainbow Dash prepares to go after Trixie, but Twilight stops her and says, "Maybe someday she'll learn her lesson."

Twilight orders Snips and Snails to clean up the area as punishment for luring the ursa minor into town. With Spike's encouragement, she gives them and Spike mustaches. Later, in the library, Twilight writes a friendship lesson to Princess Celestia that she should be proud of her magical talent, but also be aware of whether the situation is appropriate for magic. Twilight finally admits to Spike that she is the most talented unicorn in Ponyville, but "it's nothing to brag about." Spike is disappointed that Rarity did not go for his new look. Twilight advises him to try being himself, but he starts fantasizing about sporting a matching beard.

Rarity: My, my, my! What boasting!
Spike: Come on, no pony's as magical as Twi— [suddenly sees who he's talking to] Twi— [acts nervous] Twi— Oh! [clears throat] Hey, Rarity, I, uh— Mustache!

Twilight Sparkle: There's nothing wrong with being talented, is there?
Applejack: Nothin' at all... Exceptin' when someone goes around showin' it off like a school-filly with fancy new ribbons.
Rarity: Just because one has the ability to perform lots of magic does not make one better than the rest of us.
Rainbow Dash: Especially when you got me around being better than the rest of us. Uh, I mean, yeah! Uh, magic 'schmagic'! Boo!

Rainbow Dash: They don't call me "Rainbow" and "Dash" for nothing!
Trixie: When Trixie is through, the only thing they'll call you is "loser"...

Rarity: Rainbow Dash and Applejack may behave like ruffians, but Rarity conducts herself with beauty and grace.
Trixie: Ooh. What's the matter? Afraid you'll get a hair out of place in that "rat's nest" you call a mane?
Rarity: ...Oh! It... is... ON!

Rarity: Quick! I need a mirror! Get me a mirror! What did she do to my hair? I know she did something terrible to my hair!
Twilight Sparkle: Nothing.
Rainbow Dash: It's fine.
Applejack: It's gorgeous.
Spike: It's green. What?
Rarity: [cries] No. Green hair! Not green hair! [cries] Such an awful, awful color! [cries]
Golden Harvest: Well, I never!

Trixie: Ha! Once again, the Great and Powerful Trixie has proven herself to be the most amazing unicorn in all of Equestria. Huh, was there ever any doubt?

Snips: The Great and Powerful Trixie vanquished an ursa major. Can your Twilight claim that?
Spike: Oh really? Were you guys actually there?
Snips: Well, eh, uh... no, but—
Spike: But nothin'. The proof is in the pudding.
Snails: [laughs] I like pudding.

Snails: Why is it they call it a flea market when they don't really sell fleas?

Trixie: Trixie thought she said the Great and Powerful Trixie did not want to be disturbed!

Snips: [nervous laughter] We— We have a— a tiny problem.
Snails: Actually, it's a big one.

Snails: Don't worry, the Great and Powerful Trixie will vanquish it.
Trixie: ...I can't.
Snips and Snails: What?!
Trixie: uh, I can't, I never have. No one can vanquish an ursa major. I just made the whole story up to make me look better.
Snips and Snails: Made it up?!

Spike: Well, if that was an ursa minor, then what's an ursa major like?
Twilight Sparkle: You don't wanna know. 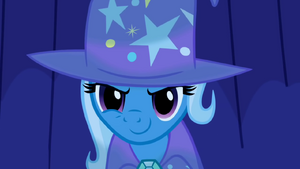