Bow Hothoof and Windy Whistles are the married Pegasus pony parents of Rainbow Dash. They first appear in the season seven episode Parental Glideance and are alluded to in other media.

Windy Whistles has an unnamed G3.5 counterpart and a similar name to G1 Wind Whistler. Lauren Faust mentioned on Twitter and Ponychan in 2013 having wanted to make "RD's mom" G1 Firefly;[1][2] G1 Firefly's G4 counterpart(s) ended up instead being General Firefly and Issue 01 Unnamed Mare - Firefly.

Bow and Windy were designed by Kora Kosicka.[3]

Windy Whistles is alluded to in Fall Weather Friends when Rainbow Dash mockingly says to Applejack, "Look, Ma, no wings!"

Bow Hothoof and Windy Whistles first appear in Parental Glideance when Scootaloo slingshots herself to their house in Cloudsdale. Upon meeting them, Scootaloo is thrilled to the point of uncontrollable, high-pitched squealing. She tells Bow and Windy that she's doing a school report about their daughter Rainbow Dash, whom she considers to be her hero, and Bow and Windy are delighted to meet another pony who adores and idolizes Rainbow as much as they do.

Bow and Windy give Scootaloo a tour of their home, showing her Rainbow Dash's bedroom and trophy collection. They react with shock and immense pride when Scootaloo informs them that Rainbow is a member of the Wonderbolts. They go to visit her at the Wonderbolt Academy and enthusiastically cheer her on during training, embarrassing her in front of the other Wonderbolts. Rainbow tells Scootaloo that it is because of her parents' tendency to embarrass her during competitions that she never told them about her new position.

During several subsequent Wonderbolts shows and public appearances, Bow and Windy appear to eagerly cheer Rainbow Dash on, causing her continued humiliation. In the academy locker room, their excessive cheering finally pushes Rainbow over the edge, and she angrily chews them out, causing them to leave in tears. With Scootaloo's help, Rainbow realizes that her parents' overenthusiastic support made her the successful flyer she is today, and she makes amends with her parents via a private Wonderbolts show dedicated to them. Bow and Windy then join Rainbow in cheering on Scootaloo's school report.

In the season eight episode The Washouts, Bow and Windy briefly appear as members of Scootaloo's fan club.

Rainbow Dash's parents, without individual identification, were first included in at least two of four different stories of how she got her cutie mark.[4][5]

In Beyond Equestria: Rainbow Dash Rights the Ship, Bow and Windy appear as hosts for Captain Celaeno and her pirate crew when they visit Cloudsdale.

Windy Whistles and Bow Hothoof are characters in Gameloft's mobile game, and serve as boss battle helpers during the "Wonderbolt for a Day" event. The game's description of Windy Whistles states, "She's got tons of great photos of her daughter Dash. Her secret? A tripod and plenty of flash!" The game's description of Bow Hothoof states, "As Rainbow Dash's dad, he's incredibly proud -- though she'd like it if he cheered a LITTLE less loud."

Rainbow Dash's Enterplay collectible card game Marks in Time expansion set card #10 C lists the quote, "I had the Junior Speedsters chant stuck in my head for three years straight! Never got sick of it either, but my dad sure did."

Bow Hothoof: [to Scootaloo] Now, little trotter, what you say is impossible. [excitedly] Because nopony is a bigger fan of our Rainbow Dash than us!

Windy Whistles: My name's Windy Whistles, and I just have to say that it is a total blast to meet somepony that loves Rainbow Dash as much as we do!

Bow Hothoof and Windy Whistles: Our daughter's a Wonderbolt?!

Windy Whistles: [to Spitfire] Nice to meet you as well, and love those goggles! Love 'em! You know, I have goggles, too. But they're mostly just for swimming. Oh, and bath time.

Windy Whistles: First of all, great job yelling at us, sweetie. No one [sniffs] can make their parents feel more worthless than you!
Bow Hothoof: [through tears] Your words were direct, clear, and... so painful! Is there nothing you can't do?!

Windy Whistles: I'm telling you, I just can't see a thing. Scootaloo, you are just so great at blindfolds!
Bow Hothoof: It's true. You must tell me what kind of knot you used. Uh, falconer's knot? Wait, no! A farmer's loop!

Windy Whistles: Oh, honey, thank you. But you didn't have to do all this. It's kind of [whispers] embarrassing.
Bow Hothoof: Eh, it is a bit much. 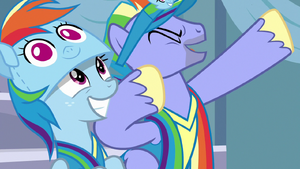