Pinny Lane, or Allie Way, and Strike are a unicorn mare and Earth pony colt who first appear in The Cutie Pox. They are not named in the show, their collective title of "BOWLER PONIES" and the latter's individual title of "Formalwear Colt" being given respectively in the guidebook The Elements of Harmony and in Gameloft's mobile game, but they are named in merchandise and Pinny Lane is also named variously in other media.

Pinny Lane shares a similar color palette to S04E11 Unnamed Earth Mare #1 and—to a lesser extent—Sapphire Shores, as well as distinctive long legs, has the same mane colors and partial mane style as "Pearly Whites", and has the same cutie mark design as Big Wig and partly sometimes S01E02 Unnamed Earth Stallion #1. One of her names is a play on Penny Lane.

Strike shares his design with "Shady Daze", Button Mash, "Green Daze", and "Caramel Coffee", and depending on the angle, he shares his mane style with Scootaloo and Archer. He shares his color scheme—except the streaks in his mane, which are absent in The Perfect Pear and sometimes Twilight Time—with Red Delicious, Goldengrape, "Wisp", and S01E21 Unnamed Earth Stallion #10.

Pinny Lane and Strike first appear at the Ponyville bowling alley in the season two episode The Cutie Pox. Pinny Lane is among the ponies who watch the Cutie Mark Crusaders bowl, and she marvels at Strike as he gets his cutie mark.

Strike appears again among the Crusaders' schoolmates throughout the season four episode Twilight Time. He learns of the Crusaders' private sessions with Twilight Sparkle and wants to participate. In the episode, Strike is sometimes seen without a cutie mark.

Pinny Lane and Strike appear at the bowling alley in the season five episode Slice of Life.

Strike appears during You're In My Head Like a Catchy Song in the season seven episode The Perfect Pear shopping at Grand Pear's pear jam stand.

Episode 1, "The Royal Wedding", shows silhouettes matching Pinny Lane and "Theodore Donald "Donny" Kerabatsos" approaching each other, having hearts appear above them, and moving briefly closer to each other, all while Pinkie Pie narrates "when two ponies fall in love, they get married and have a wedding." Strike appears in episode 3, "Cutie Mark Magic".

Pinny Lane is named on her Enterplay collectible card game Canterlot Nights expansion set card #47 R, which attributes to Mr. Kingpin the quote "Now there's a pony who knows how to make an entrance!"

Pinny Lane and Strike appear together on the Season 2 poster.

Page 33 of Little, Brown's My Little Pony Friendship is Magic official guidebook My Little Pony: The Elements of Harmony lists the two as simply "BOWLER PONIES".

Strike appears with his name listed on both versions of the poster included in the respective editions of The Amazing Book of My Little Pony published by DK. 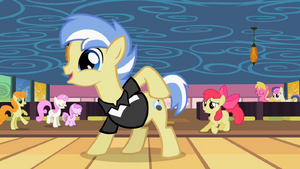