The Boy Bullies are a group of up to three male Pegasi, including Hoops, Dumb-bell, and Score, who have picked on Rainbow Dash and Fluttershy, calling them respectively "Rainbow Crash" and "Klutzershy". The three first appear as grown stallions in the season one episode Sonic Rainboom, and they make varying appearances as stallions and colts in later episodes, chapter books, and IDW comics. The two other than Hoops are not named in the show, but the three's collective title and individual names are given in merchandise.

In Sonic Rainboom, as Rainbow Dash and Fluttershy return to Cloudsdale for the Best Young Flyer competition, Hoops, Dumb-bell, and Score meet up with them as they arrive and start teasing Rainbow on how she got kicked out of Flight School, how she supposedly doesn't have a chance on winning the competition, and how the sonic rainboom is supposedly an old mare's tale, which really brings Rainbow down. A short time after Rainbow's friends arrive to Cloudsdale and have been touring the weather factory, the three stallions admire Rarity's new wings that were made by Twilight Sparkle. After they witness Rainbow Dash saving the Wonderbolts and Rarity and subsequently winning the competition, they start to gain respect for Rainbow, and apologize to her for giving her a hard time, and they ask Rainbow if she can hang out with them, but Rainbow rejects their offer to hang out with the Wonderbolts.

In The Cutie Mark Chronicles, Hoops and Dumb-bell appear as colts in Fluttershy's and Rainbow Dash's flashbacks, Hoops already having his cutie mark and Dumb-bell not yet having his. In Fluttershy's flashback, after she attempts to fly but fails, the two young colts start to harass Fluttershy of not being able to fly, only to be stood up to by Rainbow Dash (or Rainbow Crash as they call her). Rainbow decides to challenge the two bullies in a race, but while racing, Dumb-bell crashes into a column and Hoops gets spun out, and right after, Rainbow Dash performs a sonic rainboom and earns her cutie mark.

In Trade Ya!, Hoops appears as a colt in the present day at the Rainbow Falls Traders Exchange.

The Boy Bullies appear in Gilda's flashback in The Lost Treasure of Griffonstone after Pinkie Pie reminds Gilda of when Rainbow Dash used to be her friend. They briefly make fun of Gilda for not flying at flight camp, but Rainbow Dash stands up for her. The credits name Hoops as in previous materials.

In Parental Glideance, Hoops and Dumb-bell appear as colts in Rainbow Dash's flight school flashback, and Dumb-bell has a brief speaking role.

In the "O Come, All Ye Squashful" segment of the Equestria Girls holiday special Holidays Unwrapped, Sunset Shimmer mentions Hoops by his full name "Hoops Dunkington" and that he is a student at Crystal Prep Academy.

Hoops appears and is first named in My Little Pony: Twilight Sparkle and the Crystal Heart Spell chapter 9, "A Head in the Clouds". As Rainbow Dash brags at him and other Pegasi about her cloud-herding skills, he tells her to help out the rest of them, calling her 'Rainbow Crash'.

Hoops and Dumb-bell appear on My Little Pony: Friends Forever Issue #18 pages 6-8 and 10. At the Cloudsdale Flight Camp reunion, they harass Rainbow Dash and Fluttershy, calling them "Rainbow Crash" and "Klutzershy" again. They challenge Rainbow Dash to a race, stating they have been practicing, but she beats them.

The trio appears on the Comic Con 2011 and Chaos is Magic posters.

Page 35 of Little, Brown's My Little Pony Friendship is Magic official guidebook My Little Pony: The Elements of Harmony lists the trio as simply "BOY BULLIES".

In the Enterplay collectible card game's expansion set Absolute Discord, card #32 R of Hoops names him with a trademark symbol and lists the quote "Do it." This is the first time that he is simultaneously named and illustrated.

Hoops is featured and Dumb-Bell[sic]​[​citation needed​]​ and Score are mentioned in the My Little Pony special edition magazine Pony A Page!​[​specify​]​

Hoops, Dumb-bell, and Score are featured[8] on page 40 of the My Little Pony Character Guide published by Orchard Books in the United Kingdom on September 6, 2018.[9]​[​specify​]​

"Face it, Rainbow Crash. Flight school had too many rules, and not enough naptimes for you."
— Dumb-bell, Sonic Rainboom

"HA! My baby brother can fly better than you!"
— Hoops, The Cutie Mark Chronicles

"Doesn't that griffon know she's supposed to fly at the Junior Speedster's Flight Camp?"
— Hoops, The Lost Treasure of Griffonstone

"Come on, Fluttershy. Maybe I can help you get through the course this time."
— Hoops, The Cutie Re-Mark - Part 1

"And is that Klutzershy?"
— Dumb-bell, Friends Forever Issue #18 page 6

"If you're so good, Rainbow Crash, why don't you help out the rest of us?"
— Hoops, Twilight Sparkle and the Crystal Heart Spell 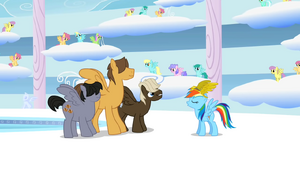