Braeburn is a male Earth pony and Applejack, Big McIntosh, and Apple Bloom's cousin from Appleloosa. He first appears in the season one episode Over a Barrel. Like most of the other named Apple family members, his name is apple-related, being the name of an apple cultivar.

Andrew Francis originally recorded voice work for Braeburn in Over a Barrel, but Michael Daingerfield was recast as Braeburn for the final cut.[4]

Braeburn resembles "Teddie Safari", and his cutie mark resembles that of Applejack in the 2011 McDonald's My Little Pony Happy Meal toys. His different cutie mark and lack of hat in Leap of Faith and, sometimes, in Equestria Games give him a coincidental resemblance to MandoPony.[5]

Braeburn is introduced in the episode Over a Barrel, making his first appearance when he greets Applejack and her friends at Appleloosa's train station.

"Hey there. Welcome to AAAAAAA-pple-LOO-sa!'"
— Braeburn, greeting Applejack and friends

Applejack attempts to tell him that the buffalo have kidnapped Spike and Bloomberg, but he is very enthusiastic about his new home town and insists on showing them the sights. After showing them around Appleloosa and its apple orchards, he finally hears about the heist.

Braeburn later meets up with Little Strongheart and appears to be willing to compromise with the buffalo, but Applejack insists on arguing the settlers' case, making them unable to reach an agreement. He watches Pinkie Pie's performance with the Sheriff, but does not participate in the battle later on.

In the episode Apple Family Reunion, Braeburn attends the Apple family reunion at Sweet Apple Acres. He first appears when he and Half Baked Apple pull a horse-drawn carriage (with Apple Strudel riding on it) towards the farm. He makes multiple cameo appearances for the remainder of the episode, including one where he walks by with a plate of uncooked apple fritters. Later in the episode, when Granny Smith reminds Applejack that she needs to give the family members time to enjoy each other's company, Braeburn says "Uh-huh" in a deep voice.

Braeburn makes a slight cameo in Pinkie Pride in the beginning during the Appleloosa party Cheese Sandwich threw for them. He makes another cameo in Leap of Faith, without his hat and with a guitar cutie mark. In Equestria Games, he appears in the stadium and, looking as in Leap of Faith, outside the stadium.

During Twilight's Kingdom - Part 1, Discord captures Braeburn and some other ponies in Appleloosa so Lord Tirek can steal their Earth pony magic. He appears again in Part 2 seeing his and the other Earth ponies' magic returned to them.

He appears running in Bloom & Gloom during the twittermite infestation in Apple Bloom's first nightmare.

In Appleoosa's Most Wanted, Applejack takes Braeburn's place during the Appleloosa rodeo after he injures one of his hooves. When Applejack tasks him to watch over the Cutie Mark Crusaders while she practices, he loses track of them while the fillies wandered off.

After hearing the news that Trouble Shoes is on the loose in Appleloosa, Braeburn watches over the Crusaders again in his house while he guards the door, denying them to leave. After he eventually falls asleep, the Crusaders wander off through a window to look for Trouble Shoes. He informs Applejack of the Crusaders' disappearance, so they both inform Sheriff Silverstar who thinks it's Trouble Shoes that kidnapped them. He travels with Applejack and the sheriff out in the forest to rescue the Crusaders. He also appears on the bleachers during the rodeo.

In Buckball Season, Braeburn appears as the offense team member for Appleloosa's buckball team. Applejack mentions early in the episode that he recruited a unicorn and Pegasus for his team and boasted that his team could beat Ponyville's, but his team loses to Ponyville at the end of the episode six points to five.

In The End in Friend, Braeburn appears again with his buckball team playing against Rarity and Rainbow Dash.

Braeburn appears in The Summer Sun Setback, assisting with the food for the final Summer Sun Celebration. He is among the many Earth Ponies who have their magic stolen by Tirek, leaving him weakened (for which he believes the food may be responsible). His magic is later returned off-screen.

In The Last Problem, Braeburn briefly appears in Applejack's group shot during The Magic of Friendship Grows.

Braeburn appears in a flashback of Raise this Barn in Harvesting Memories.

Braeburn is mentioned in Fluttershy and the Fine Furry Friends Fair when Applejack says that his dog, Albus, has "come in last place at every competition." Braeburn appears in Lyra and Bon Bon and the Mares from S.M.I.L.E. helping set the Saddle Hawkins square dance.

Applejack’s cousin from Appleloosa loves to show visitors around his hometown!

If you're visiting Appleloosa, you're likely to be welcomed by BRAEBURN.

BRAEBURN is happy to show anypony around Appleloosa. He's helpful like that. If you ask nicely, he might even strum on his guitar for you.

"Cousin Applejack, mind yer manners, you have yet ta introduce me to your compadres! Shame on you!"
— To Applejack in Over a Barrel

"Them buffalo, they want us settler ponies to take every single tree you see here off this land. They sure as hay don't want any new ones added in."
— Over a Barrel 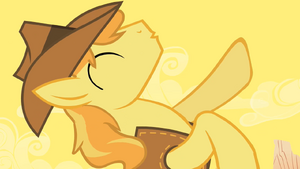