My Little Pony Friendship is Magic Wiki
Register
Don't have an account?
Sign In
Advertisement
in: Creatures, Featured articles
English

Breezies are a race of rare and intelligent magical creatures native to Equestria. They are first mentioned in the episode Three's A Crowd by Fluttershy, and they make their physical debut in It Ain't Easy Being Breezies.

The Breezies share their name with a race of fairy-like ponies that appear in a number of direct-to-video My Little Pony animated features released during the franchise's third generation. They resemble Pegasus ponies, but are much smaller in size and have butterfly-like wings and antennae. They are depicted as very mischievous creatures and regularly migrate across the land.

Breezies as a species are named similarly to two individual ponies: Breezie Flora, a Pegasus mare with a G3 Earth pony counterpart, and Mr. Breezy, an Earth pony stallion.

Brian Drummond, Seabreeze's voice actor, stated in regard to the fake language, "Some fun lines were scripted that we used as a good base for mostly a bunch of silly ad libbing."[1]

In Three's A Crowd, Fluttershy mentions to Twilight Sparkle that she's been given permission from the Equestrian Society for the Preservation of Rare Creatures to observe the Breezies.

In It Ain't Easy Being Breezies, the Breezies travel through Ponyville during their home migration, riding on a breeze created by Ponyville Pegasi. Fluttershy explains to Mr. and Mrs. Cake that the breeze serves to activate the Breezies' magic and protect the pollen they carry. Fluttershy's knowledge of the Breezies also helps her in catering to the Breezies' sensitivity to light and sound.

As the Breezies flutter through town, all of Ponyville is enamored with their grace and cuteness. However, a mishap caused by Spike causes some of the Breezies to get separated from the rest of the swarm and swept by the wind. Fluttershy saves this group of Breezies and decides to look after them for a short while until they recover from their trauma.

Fluttershy cares for the Breezies at her cottage, and the Breezies are more than grateful for the hospitality. But one of the Breezies, a short-tempered one named Seabreeze, is eager for them to join the rest of the swarm and return home before the portal to their home closes. Seabreeze is overly critical of his fellow Breezies, calling them "incompetent" and "losers". As the rest of the Breezies feign illness to stay in Fluttershy's care, Seabreeze leaves the cottage and attempts to go it alone. His fragility to the elements and run-in with a swarm of bees, however, lead to him being rescued by Fluttershy. It is only after putting aside her kindness and being stern with the Breezies that she finally convinces them to go home.

When Fluttershy's group of Breezies are too few in number to face the wind, Twilight uses a spell to transform herself and her friends into Breezies to make up the difference. Together, they're able to safely ride the breeze leading to the Breezies' home. As a sign of gratitude, Seabreeze gives Fluttershy a flower as a parting gift.

In Memnagerie, the Breezies appear in one of Fluttershy's past memories during It Ain't Easy Being Breezies as she gets assertive with them.

The Breezies are shown to be rather weak flyers, dependent on breezes and calm winds to allow them to fly any significant distance, and can easily be knocked from the air by either strong winds or objects that disrupt their course. They live in a hollow isolated from Equestria by a magical portal that opens every so often. Most of the Breezies speak in an unintelligible language reminiscent of Swedish or Norwegian; while they all understand normal pony speech, only Seabreeze is able to speak it.

Breezies are also shown to have luminescent antennae. When Seabreeze crashes into a beehive, he illuminates the inside of the hive with a light shining from the ends of his antennae, similarly to Snails in Boast Busters and Rarity in Castle Mane-ia.

In chapter books, a Breezy[sic] is mentioned in Rarity and the Curious Case of Charity chapter 12.

BREEZIES are a group of enchanted pixies who ride the winds of Equestria in large swarms, carrying pollen. Their home is a secluded hollow that can be reached only by traveling through a magic portal. The Breezies speak their own bizarre language. They understand pony talk, but don't expect them to speak it. Breezies do what they want when they want, okay?

Two toy sets, each packaged with one pony, one Breezie, a heart-shaped locket to hold the Breezie, and a key for the locket, were first shown at the 2014 American International Toy Fair, released, and later re-released; these two sets are Fluttershy & Sea Breezie and Princess Twilight Sparkle & Sunset Breezie.[2] The eleventh wave of mystery pack toys and collector cards includes Cloudia Breezie, Sunny Breezie, and Lilac Breezie; each of these three Breezies' cards states that she and all her friends love "to visit" Ponyville. Three toy sets, each packaged with one pony and three Breezies, were later still also released; these three sets are Rarity & Friendship Flutters, Buttonbelle & Friendship Flutters, and Trixie Lulamoon & Friendship Flutters.

In the Crystal Games expansion set of Enterplay's collectible card game, the Mane Six are also depicted in their "Breeziefied" forms on cards #12 U (Rainbow Dash), #20 U (Applejack), #42 U (Pinkie Pie), #60 U (Twilight Sparkle), #70 U (Rarity), and #82 U (Fluttershy). In the Absolute Discord expansion set, Breezies are featured on card #65 F, which lists the quote "Melvin arsin eifolk! Martlen outlooken mire!"; card #138 R, which attributes to Fluttershy the quote "Please watch your step..."; and card #168 C, which features the text "Caring for lost breezies requires a gentle voice and a gentler touch." 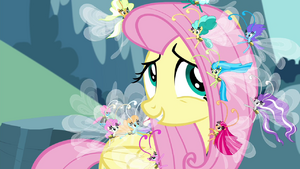