Bridle Gossip is the ninth episode of the first season of My Little Pony Friendship is Magic. In this episode, Twilight Sparkle and her friends encounter Zecora, a mysterious zebra who lives in the Everfree Forest. The title of the episode is a play on the phrase "idle gossip".

According to old notes by Amy Keating Rogers, Spike's nickname for Twilight Sparkle was originally "Droopi-horn".[2]

Twilight Sparkle and Spike arrive in Ponyville's town square to find the town completely deserted. While they speculate about where everyone could be, Pinkie Pie fervently calls to them from Sugarcube Corner, telling them to get inside before "she" gets them. Inside, they find Rainbow Dash, Applejack, Rarity, and Fluttershy, who nervously explain that they are hiding from a strange hooded creature named Zecora. The only pony not scared is Applejack's younger sister Apple Bloom, also present. According to the other ponies, no one in Ponyville knows what Zecora's reasons for visiting the town are, except that she does so monthly. They also know that she lives in the Everfree Forest, a self-preserving environment which is almost alien to Ponyville. After seeing her pull her hood down, Twilight concludes that Zecora is a zebra and not an "odd-looking pony". The gray and white in her strange mane are really her natural colors. According to books Twilight has read, Zecora's species is from "a far away land". Pinkie Pie shares a song with the others, profiling Zecora as an "Evil Enchantress".

"I am sure there's an explanation for everything Zecora does, and if anypony here were actually brave enough to approach her, she would find out the truth."
— Twilight Sparkle

While the ponies are busy discussing Zecora's nature, Apple Bloom decides to approach Zecora herself and slips out of the bakery. She follows Zecora to the Everfree Forest. Upon noticing Apple Bloom's absence, the other ponies decide to leave the house to search for her.

They find Apple Bloom when she is just behind Zecora, who is surrounded by many blue flowers. The zebra retreats to the forest, giving them a brief warning: "Beware! Beware, you pony folk! Those leaves of blue are not a joke!" Applejack scoops Apple Bloom off the ground while the other ponies, save Twilight and Fluttershy, taunt the zebra and ignore her warning. On their way back, Twilight tries to explain to her friends the difference between magic and Zecora's "curses" but to no avail. Twilight classifies the "curses" as harmless and fictional "pony tales". However, Applejack warns her that some "pony tales" are indeed true. As the ponies leave the forest, they all trot through the "blue flowers" except for Apple Bloom, who is carried out on Applejack's back.

During the night, Twilight dreams about Zecora and her friends' warnings of her evil. The next morning, Twilight wakes up after recalling everything her friends said about the strange zebra. As she brushes her hair, she is shocked to find her horn turned soft, wobbly, and covered in blue spots. She frantically searches for a book containing a way to fix her problem, or at least provide information on it, but she cannot find anything useful. Spike finds a book called Supernaturals that she may have overlooked, but she insists that there's no need to even open it because it details superstitions or other useless information. Her friends arrive at the library, each with an ailment of their own. Pinkie Pie's now blue-spotted tongue is swollen to the point of hanging out of her mouth, and she can't speak intelligibly or without spitting. Rainbow Dash's wings have been inverted and moved from her back to her lower sides, preventing her from flying properly and causing her to crash constantly. Rarity's mane and tail are messy and her coat has grown so long that she cannot see or walk properly. Applejack has drastically shrunken in size and has to ride on Apple Bloom just to get to the library. Fluttershy is afflicted with a deep-sounding male voice. Spike laughs himself silly at the ponies and, in making good-natured fun of their misfortune, makes up nicknames for each pony:

Spike, however, can't immediately think of a proper name to make fun of Twilight's wobbly horn.

"[Sarcastic laughter] This is no joke, Spike. Now start looking for more books so I can find a cure!"
— Twilight Sparkle

The ponies, with the exception of Twilight, conclude that Zecora has "cursed" or "hexed" them, and they resolve to confront her in the forest in hopes of finding a cure. But Apple Bloom, the only one that was not afflicted, believes she alone is to blame for the ponies' ailments and ventures ahead to find Zecora. As Apple Bloom leaves, Applejack wonders aloud where she is going and jumps into her tail. When the others notice Applejack is missing, they first worriedly check to see if they've stepped or sat on her. Upon realizing that Apple Bloom is also gone, the ponies realize she must have gone after Zecora again and set out in search of her. As the ponies leave, Fluttershy asks Spike if he is coming along, but he makes up an alibi to stay there to look for a cure. He manages to think up a joke-like nickname for Twilight Sparkle: "Twilight Flopple".

On her way through the Everfree Forest, Applejack reveals herself in Apple Bloom's mane and orders her to turn around. Apple Bloom refuses and, realizing that her diminutive older sister can't stop her, places her on a tree branch she can't get down from before continuing on her way. When the others enter the forest later, Rainbow Dash crashes into the tree Applejack was left in, accidentally catching the tiny pony in her mouth. Applejack pulls herself out and quickly fashions a bit and reins from leaves, a stick, and some vine. She throws it on Rainbow Dash and, climbing onto her chest, helps to steer her in the right direction.

When the others finally reach Zecora's hut, they watch through her window as she mixes a strange concoction in her cauldron, chanting something in an unknown language. Pinkie gets Fluttershy to sing her "Evil Enchantress" song to point out that Zecora fits the profile in it. Twilight starts to wonder whether Zecora might be "bad" after all. When she overhears the zebra mentioning Apple Bloom, she concludes that Zecora is preparing a soup to eat her with. The four ponies scream in horror. Rainbow Dash and Applejack barge in and the other ponies follow suit in a rescue attempt, upsetting the cauldron and spilling its contents onto the floor. The hut is further wrecked by Rainbow Dash's uncoordinated flying. As the ponies loudly confront Zecora about her "curse", Apple Bloom arrives from behind them with packed saddle bags and tells them she is assisting Zecora by gathering ingredients. They both reveal that the brew Zecora had been making is a remedy for poison joke, a poison ivy-like plant that causes "laughable" results to anyone who touches it. They had never been cursed but had been affected by the blue plants, and were too stubborn to heed Zecora's warning the previous day when they saw her. The cure is from one of Zecora's books, another copy of the book that Spike found in the library. Twilight admits she didn't bother looking past its weird title. It turns out that the Supernaturals in the book's title were natural remedies and cure-alls that are simply super. After apologizing to Zecora for not bothering to "look inside", Twilight asks if Zecora could make another batch of the remedy. Zecora is happy to do so, but she tells Twilight they need a herb from Ponyville, which she could not obtain because the shops are always mysteriously closed.

The ponies escort Zecora back to town, where the other ponies are still afraid of her. Twilight talks to the concerned ponies and the scene cuts to the main characters having a bath at the spa, with Twilight giving her friendship report in a voiceover. One of the spa ponies asks Zecora for the recipe of her "luxurious" herbal bath, and the episode ends with all the ponies cured of their poison joke afflictions, after briefly panicking over not finding Applejack.

Applejack: The Everfree Forest just ain't natural. The plants grow...
Fluttershy: Animals care for themselves...
Rainbow Dash: And the clouds move...
Applejack, Fluttershy and Rainbow Dash: All on their own!
Rarity: [faints]
Pinkie Pie: And that wicked enchantress Zecora lives there doing her evil... stuff! She's so evil, I even wrote a song about her!

Zecora: Beware! Beware, you pony folk! Those leaves of blue are not a joke!

Applejack: Good gravy, girl! What's wrong with you?!
Fluttershy: [deep male voice] I don't want to talk about it.

Spike: This is hilarious! Look at all of you. We got "Hairity", "Rainbow Crash", "Spitty Pie", "Apple Teeny", "Flutterguy", and... I got nothin'. "Twilight Sparkle"... I mean, seriously. I can't even work with that.
Twilight Sparkle: [sarcastic laughter] This is no joke, Spike!

Rainbow Dash: It's time to 'pony up' and confront Zecora!

Rarity: Oh! OH! Pinkie, what are you doing? Ah, really. Aah! You ever hear of personal space?
Pinkie Pie: Nopth.

Zecora: How dare you! You destroy my home, destroy my work, then rudely accuse me of being a jerk?!

Zecora: Maybe next time you will take a second look, and not judge the cover of the book.

Pinkie Pie: Oh my gosh! I never realized how horrible it is not to be able to talk! I love talking so much that I couldn't talk anymore and my tongue was all "eeeeeeehhhh". It was the worst! Don't you agree, Fluttershy?
Fluttershy: ...Yes. 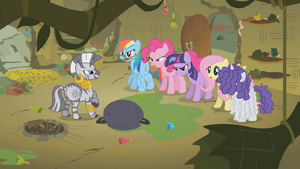