View source
watch 01:25
'My Little Pony' Lore: Bright Mac and Pear Butter
Do you like this video?
Play Sound

Not to be confused with MLP/Transformers 01 Unnamed Mare - Heart and Pickle.

Bright Mac, full name Bright Macintosh,[note 1] and Pear Butter are the married Earth pony parents of Applejack, Apple Bloom, and Big McIntosh. They physically appear in flashback in the season seven episode The Perfect Pear, and they are alluded to in other episodes and media.

In December 2011, Lauren Faust mentioned that the whereabouts of Applejack's parents had not been planned and that the show was unlikely to mention that they've passed away.[1] Faust stated that while she wanted it to be the case, she "didn't think they would allow it."[2] At the 2016 Middle Equestrian Convention in Poland, My Little Pony character designer Kora Kosicka stated in response to a fan question that Applejack's parents are dead.[3]

Bright Mac's color scheme is similar to those of Strawberry Sunrise, Don Neigh, "Special Delivery", "Nolan North", "Gingerbread", and male Starburst, and he shares his coat and mane colors with Apple Bloom.

On November 17, 2012, Tim Stuby joked about Applejack's parents being played by John Stamos[4] and Nancy Kerrigan.[5]

According to M. A. Larson in October 2020, Pear Butter was originally named Honeycrisp and written for an earlier scrapped episode titled "Mother Country",[7] in which a satyr gave her the ability to make anything grow by touching it but she left home after realizing she could no longer touch her children.

In the season three episode Apple Family Reunion, a pair of shooting stars appears twice flying through the sky over Sweet Apple Acres. According to then-storyboard artist Sabrina Alberghetti,[8] who implemented it,[9] the shooting stars are meant to represent Applejack's parents; this was also hinted at by Tim Stuby.[4]

In the season five episode Crusaders of the Lost Mark, Applejack tells Apple Bloom after she receives her cutie mark, "If Mom and Dad were here, they'd be so proud of ya."

In The Perfect Pear, the Apples' parents' love story is revealed and detailed through flashbacks. As infants, Bright Macintosh of the Apple family meets and becomes friends with Pear Butter of the rivaling Pear family, nicknaming her Buttercup. As they grow up together, their friendship slowly turns into mutual romantic affection, despite the disapproval of Bright Mac's mother, Granny Smith, and Pear Butter's father, Grand Pear.

When the escalating feud between the Apple and Pear families threatens to split Bright Mac and Pear Butter apart, they have a secret wedding, officiated by Mayor Mare, with Burnt Oak and Mrs. Cake (their respective best friends) in attendance. Granny Smith and Grand Pear soon find out about their marriage, and when Grand Pear refuses to accept Pear Butter's love for Bright Mac, she renounces her family ties to be with the Apples.

Bright Mac and Pear Butter's eventual fate is unknown, but their legacy lives on through Applejack's honesty, Big Mac's humility, Apple Bloom's intuition towards others' special talents, and a large tree that grows both apples and pears, the seeds of which they planted on the night of their wedding.

In the holiday special My Little Pony Best Gift Ever, Applejack mentions that she got her hat from her father Bright Mac.

In The Last Problem, Bright Mac and Pear Butter briefly appear in Applejack's group shot during The Magic of Friendship Grows.

In the fifth episode of PonyChat, "BRIGHT MAC" and "BUTTERCUP" are included on "APPLEJACK'S FAMILY TREE" presented by Elle on the Inside.

Pear Butter: I can't help it. We just sorta... happened.

Bright Mac: I don't want to be apart from you. Ever. I'm not sure what we'll do, but I'm sure of us. So sure that I'd marry you today.
Pear Butter: I would, too!

Pear Butter: The Apples are my family now, too. 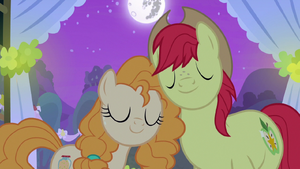