Bright Smile is a Crystal Earth pony stallion with a bright teal coat, golden mane and tail, gold eyes, and a cutie mark of a crenelated tower. He has a speaking role in the episodes The Crystal Empire - Part 2 and Equestria Games and in the magazine​[​specify​]​ comic The Quest for the Lost Toy! He is unnamed in the show, but he is named in merchandise and other media.

He first appears in The Crystal Empire - Part 1 during Princess Celestia's flashback of the Crystal Empire, shown to be considerably close with "Fleur de Verre". Later in the episode, he is one of many Crystal Ponies having become depressed as a result of King Sombra's curse. Hearing news of the Crystal Faire lifts his spirits and returns color to his coat and mane.

In The Crystal Empire - Part 2, Bright Smile has other forms of fun at the Crystal Faire, like watching Rainbow Dash and Fluttershy's jousting match. At the end of the episode, he has a brief speaking role when Princess Cadance swoops down from the sky with the Crystal Heart, calling her the "Crystal Princess", and he helps power the Heart to defeat Sombra.

Bright Smile takes part in the cleaning of the Empire and trains with Shining Armor and other Crystal Ponies on the stadium track in Games Ponies Play, and he appears during Morning in Ponyville in Magical Mystery Cure.

In Flight to the Finish, Bright Smile appears in the stadium crowd at the Crystal Empire during the Cutie Mark Crusaders' flag-carrying audition. He also appears at the Rainbow Falls Traders Exchange in Trade Ya!, has a speaking role in which he asks Spike for his autograph in Equestria Games, and is seen in the crowd welcoming the dignitaries in Twilight's Kingdom - Part 1.

In The Beginning of the End - Part 1, Bright Smile briefly appears being freed from King Sombra's mind control.

Bright Smile appears on pages 15 and 18 in the storybook Welcome to the Crystal Empire!

Bright Smile is a character in Gameloft's mobile game.

A mini-figure toy and collector card of Bright Smile are included in the twenty-third wave of mystery packs. The collector card states about Bright Smile, "He smiles bright with friends." In the Crystal Games expansion set of Enterplay's collectible card game, Bright Smile is named on card #79 C, which gives him the description "Bright Smile just seems to get along with everypony. When asked who he was rooting for at the Equestria Games, Smile answered, "Whoever's doing the worst!""

"Look, look, it's the Great and Honorable Spike the Brave and Glorious!"
— Equestria Games

"How you saved our Empire last time last time you were here was really amazing!"
— Equestria Games 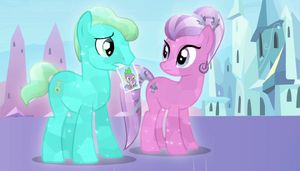