Brotherhooves Social is the seventeenth episode of the fifth season of My Little Pony Friendship is Magic and the one hundred and eighth episode overall. The title is a reference to the season two episode Sisterhooves Social.

Big Mac volunteers to be Apple Bloom's sister for the Sisterhooves Social while Applejack is out of town.

This episode and Made in Manehattan take place simultaneously, with the former focusing on Big Mac replacing Applejack in the Sisterhooves Social and the latter focusing on Applejack and Rarity who are called by the map to the city of Manehattan to help Coco Pommel on a big project.

"Orchard Blossom" was first mentioned at the 2015 San Diego Comic-Con.[1]

The episode opens with the Apple family preparing for the upcoming Sisterhooves Social. As he helps Granny Smith search their attic for a blue ribbon to use in the competition, Big McIntosh looks wistfully outside to see Applejack playing with Apple Bloom, who is confident that she and her sister are going to sweep the competition. Granny Smith stumbles upon an old dragonfly toy Big Mac and Apple Bloom used to play with together. Big Mac quickly grabs the toy and departs.

Big Mac brings the toy outside to show Apple Bloom, but she is so caught up in heaping praises upon Applejack for all her accomplishments—including saving Equestria "a gazillion times"—that she barely pays any attention to the toy. Dejected, Big Mac sulks back inside the barn. Applejack notices her brother's sour mood and asks him what's wrong, but before he can answer, Applejack's cutie mark begins to glow, indicating she's been summoned by the map in Twilight Sparkle's castle. Apple Bloom worries this means Applejack won't be able to take part in the social, but Applejack assures her that it might just be a false alarm.

Unfortunately for Apple Bloom, Applejack has indeed been called to the city of Manehattan with Rarity and won't be back in time for the social, sending Apple Bloom into a slump. Scootaloo and Sweetie Belle come over to invite Apple Bloom to cheer on Scootaloo, who is participating in the social with Rainbow Dash even though they aren't related. Granny Smith mentions that the social has a loose definition of what counts as a "sister", musing about the second cousins that could have participated with Apple Bloom, which gives Big Mac an idea.

As Rainbow Dash and Scootaloo register for the social, Apple Bloom arrives and unenthusiastically announces to her friends that she will be participating in the social after all, explaining that her "long lost cousin" Orchard Blossom has come to take Applejack's place. "Orchard Blossom" then appears, and it is immediately apparent that "she" is actually Big Mac disguised as a mare, much to Apple Bloom's embarrassment.

"Orchard Blossom" introduces herself to Apple Bloom's friends and Rainbow Dash, but they all see through the disguise instantly. Still, they decide to humor Big Mac as he signs up for the Sisterhooves Social. Apple Bloom quickly excuses herself, afraid that the events judges will also call Big Mac's bluff. To her surprise, the two are approved as a pair and allowed to compete.

Apple Bloom and "Orchard Blossom" compete in a singing event, during which Big Mac accidentally drops his falsetto voice and nearly blows his cover. The two continue to fail at every event they take part in, including chanting, jumping rope, and juggling. Apple Bloom wants to call it a day and wait for next year's Sisterhooves Social with Applejack, but "Orchard Blossom" has none of it and assures her that she will win a blue ribbon before day's end.

After managing to pass Rainbow Dash and Scootaloo, "Orchard Blossom" and Apple Bloom reach the finish line first, with Big Mac's disguise falling apart as he celebrates. The judges interrupt their celebration, stating that while they have knowingly turned a blind eye towards Big Mac's disguise, they must disqualify him and Apple Bloom for his destructive and unsportsmanlike behavior in the race. Rainbow Dash and Scootaloo are declared the winners while Apple Bloom bitterly leaves with Big Mac.

Back at Sweet Apple Acres, Apple Bloom finds Big Mac sitting alone by a tree, assuring him she is no longer upset since she and Applejack can still participate in the next Sisterhooves Social. She asks why he wanted to win so badly, but Big Mac refuses to talk about it. As Apple Bloom prepares to leave, Big Mac finally speaks up and admits that he wanted Apple Bloom to look up to him like she used to as a filly, before Applejack became "the hero of the Apple family". Apple Bloom gives Big Mac a loving hug, saying he has been and always will be her hero, and apologizes for making him feel left out.

Granny Smith later announces that Applejack has returned from her trip to Manehattan, but Apple Bloom replies that she is spending quality time with her brother.

Big McIntosh: [as Orchard Blossom, falsetto] Well, I do declare! It's hotter today than the business end of a corncob pipe! [giggling]

Apple Bloom: Sweetie Belle and Scootaloo, cousin Orchard Blossom.
Big McIntosh: It is my extra-ordinary pleasure to make your acquaintance.
Sweetie Belle: [deadpan] That's Big Mac in a dress.
Big McIntosh: Big Mac? Why, as charmed as I am that you find me in the slightest resemblance to such a, a, a fine and noble product of the Apple clan, I am astonished in equal measure.

Rainbow Dash: Cousin Orchard Blossom, huh? I know Applejack has a lot of relatives, but I feel like she would've mentioned you.
Big McIntosh: Why, you must be Rainbow Dash. You're Scootaloo's... say... how are y'all related again?
Rainbow Dash: Hm. Why don't I just let you finish signing in. [hushed] But don't think me and Scootaloo are gonna take it easy on you just 'cause you're a stallion!

Apple Bloom: Um, excuse me, I have to... go to the bathroom. [zip]
Big McIntosh: [tuts] You mean 'powder your muzzle', don't you, dear? Such a more feminine-like reference to nature's call, don't you agree?

Apple Bloom: How do you think cousin Orchard Blossom would describe this sunset?
Big McIntosh: [chuckles] Why dear, I do declare this is the most beautiful sunset my eyes have ever looked upon, though sitting here on these tree roots is a trifle uncomfortable for my hindquarters.
Apple Bloom and Big McIntosh: [laughing] 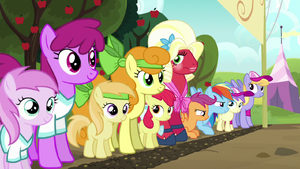