Buckball Season is the eighteenth episode of season six of My Little Pony Friendship is Magic and the one hundred and thirty-fifth overall. The title is similar to the season one episode Applebuck Season.

In this episode, Applejack and Rainbow Dash train Fluttershy and Pinkie Pie for an upcoming buckball game against Appleloosa.

In production order, this is season six episode nineteen.

Production images of the episode's storyboards were uploaded to Imgur on February 7, 2016: "Animatic - CONFORMED" version, dated December 17, 2015;[3] during Fluttershy's line at the beginning of the second act, Pinkie Pie having her usual mane style[4] rather than her Scare Master mane style.

The episode opens with Applejack bucking apples at a bull's-eye. When Rainbow Dash appears and asks what she is doing, Applejack explains that she is practicing her "distance bucking". According to Applejack, her cousin Braeburn recently made the boast that his team in Appleloosa could beat Ponyville's team at the sport of buckball. Rainbow Dash takes offense at such a challenge and eagerly volunteers to defend Ponyville's honor by joining the Ponyville buckball team.

On Sweet Apple Acres' buckball field, Applejack assembles several unicorn ponies together and explains how the game is played: Earth ponies play offense and try to buck softballs into their team's goal basket; Pegasi play defense and try to block the ball from going into the other team's goal before passing it back to the Earth pony on their team; and unicorns play assistance to offense team members by levitating the goal basket and catching incoming balls in the outfield.

As practice gets underway, none of the unicorns trying out meet Applejack and Rainbow Dash's expectations. However, Pinkie Pie displays a great talent for playing offense, and Fluttershy is good at blocking goal shots with her tail. As Snails walks by carrying a pair of water buckets, Pinkie Pie accidentally bucks several balls at him, but he effortlessly catches them in his buckets. Applejack bucks several more balls at Snails, and he catches those in a basket as well.

With the talent Snails has for catching goal shots, Applejack and Rainbow Dash decide that Ponyville's buckball team should consist of Pinkie Pie, Fluttershy, and Snails.

Fluttershy and Pinkie are uncertain about playing against Appleloosa in Applejack and Rainbow's place at first, but they agree once they realize how much fun they had playing. In order to prepare the two for the upcoming game, Applejack and Rainbow put them through rigorous training.

Rainbow Dash compels Fluttershy to run an elaborate obstacle course, and Applejack tosses softballs at Pinkie to kick into goal baskets. The intensity of the training and Rainbow Dash's drill sergeant-like coaching cause Fluttershy to frequently trip up. When Applejack piles onto Pinkie the pressure of not letting Ponyville down, Pinkie gets so overwhelmed that she cannot make successful goal shots anymore. Snails, on the other hand, remains perfectly calm and collected as he practices catching balls in the goal.

Applejack and Rainbow Dash are surprised by Fluttershy and Pinkie's sudden lack of talent after the skills they demonstrated earlier. Reasoning that they just need some rest, the two coaches call it a day and tell them to rest up for the next day's buckball game. On their way home, Pinkie and Fluttershy confide in each other about their worries of letting their friends down. However, they take relief in the fact that very few ponies in Ponyville have even heard of buckball...

...until numerous ponies show up at the train station to cheer for the Ponyville team and see them off to Appleloosa.

All fun and games until...

After their big send-off at the train station, Applejack, Rainbow, Fluttershy, and Pinkie ride the Friendship Express to Appleloosa. Fluttershy and Pinkie's anxieties are made even worse when Applejack mentions that Ponyville is planning a parade for their return and Rainbow suggests the possibility of a commemoration by Princess Celestia. Unable to deal with the overwhelming pressure of disappointing their friends, Fluttershy and Pinkie confess to Applejack and Rainbow that they don't want to play buckball anymore, and they run away upset.

Applejack and Rainbow come to realize that they focused so heavily on what made the game important to them that they ruined what made it fun for Fluttershy and Pinkie. After finding the two hiding in the train's luggage car, Applejack and Rainbow tell them that they don't have to play against Appleloosa and that they will take their places instead. However, because they have not had any practice themselves, they ask Fluttershy and Pinkie to play one practice game against them before the game against Appleloosa starts.

Some time later, Fluttershy, Pinkie Pie, and Snails play against Braeburn's team in buckball, and the score is tied five-to-five. When Fluttershy and Pinkie worry about winning, their friends remind them not to think about it and just have fun. In the final seconds of the game, Fluttershy and Pinkie manage to score a point and win the game.

Braeburn commends the Ponyville team for playing such a good game and resolves to get serious for their rematch. Fluttershy and Pinkie tell him not to get too serious, however, as the secret to good buckball is just having fun.

Rainbow Dash: Between Applejack and me, we've got two-thirds of a team. All we need is a unicorn. That's where you two come in.
Pinkie Pie: [whispering loudly to Fluttershy] Uh... they know we're not unicorns, right?
Rainbow Dash: Uh, obviously. You're gonna be on my team, and Fluttershy is gonna be on Applejack's team.
Applejack: We'll play against each other along with whatever unicorns want to try out until we find the best one.
Pinkie Pie: Ohhhh! Phew! That's a relief because I left my unicorn costume at home!

Fluttershy: There's no way that we can get in the zone, because the zone sounds like a horrible place since we are terrible at buckball and we are going to lose and let everypony down and we don't want to play anymore!

Fluttershy: But how do we keep from worrying about it?
Snails: You could do what I do and not think about it. Seriously. I don't think about anything. Ever.

Braeburn: I'm gonna have to get real serious about a strategy for our rematch.
Fluttershy: Oh, I wouldn't get too serious.
Pinkie Pie: Yeah! Everypony knows the secret to good buckball is just having fun! 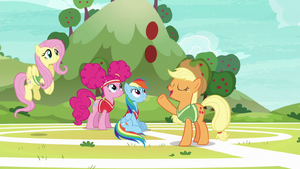