Buddy is a male Pegasus pony with a green coat, gray mane and tail, blue eyes, and a cutie mark of three four-leaf clovers, though, in Hurricane Fluttershy, he is seen with a white coat. He has a brief speaking role in the season six episode Applejack's "Day" Off. He is unnamed in the show, but he is named in other media.

Buddy first appears in the season two episode Hearth's Warming Eve. During the titular pageant, he appears among the starving Pegasi. In Hurricane Fluttershy, he appears both in Fluttershy's flashback of flight camp and in the present among other Pegasi lifting water up to Cloudsdale.

In Games Ponies Play, Buddy appears in Rainbow Dash's flashback in Cloudsdale attending the announcement of the host of the Equestria Games.

Buddy appears briefly in Rainbow Falls, at the Equestria Games tryouts in the titular location. In Pinkie Pride, he attends Rainbow Dash's birth-iversary party at the start of Make a Wish. In Filli Vanilli, he appears at Zipporwhill's cute-ceañera listening to the Pony Tones perform. In Trade Ya!, Buddy appears at the Rainbow Falls Traders Exchange.

In Applejack's "Day" Off, Buddy makes a brief speaking appearance waiting in line for the steam room at the Ponyville Day Spa.

In Grannies Gone Wild, Buddy makes a background appearance waiting in line for the Wild Blue Yonder roller coaster at a Las Pegasus resort. In Horse Play, he appears in the audience for the play at the School of Friendship.

In the special My Little Pony Best Gift Ever, Buddy makes various background appearances at the Rainbow Falls Hearth's Warming Craft Fair walking with an unnamed mare, at Flim and Flam's stand, and talking with Fleetfoot by the train station.

Buddy appears in a picture with his name listed on My Little Pony: Friends Forever Issue #18's regular cover.

"Ugh! Just waiting for the steam to build up."
— Applejack's "Day" Off 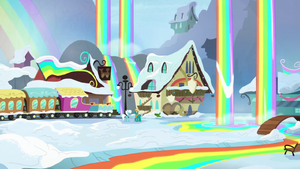