Bulk Biceps is a male Pegasus pony who first appears in the episode Hurricane Fluttershy. He has a white coat, a dirty-blond mane, and intense red eyes. He has an extraordinarily muscular character model.

Bulk Biceps has a much larger, more muscular build than most other background ponies in the show; he shares his body design with "Mama Biceps", "Two Ton", and partly "Big Bell" and Issue 13 Unnamed Stallion - Arrowed Heart. Though a fully grown stallion, he also has considerably smaller wings than the other adult Pegasi, more closely resembling wings of Pegasus foals, although his wings can function as well as any other Pegasus. Unlike other background Pegasi introduced in Hurricane Fluttershy, like Thunderlane, Blossomforth, and Silverspeed, Bulk Biceps was not officially named in the episode's script and was intended as "more of a visual gag."[4] In the script, what would become his lines were only attributed to "pony walla" ('walla' being a general term in scriptwriting and voice ADR work for miscellaneous background voices), and the storyboard artists and animators made the decision to turn "pony walla" into a boisterous, large Pegasus.[5] The name "Bulk Biceps" was first listed in Michael Dobson's online resume in October 2013 as a My Little Pony role voiced by Michael Dobson,[6] and was later listed in Enterplay's collectible card game. Shortly after the character's cameo in Flight to the Finish was first aired on December 14, 2013, Meghan McCarthy tweeted "Hmm. I wonder what the guy with the dumbbell Cutie Mark’s name is. #MLPseason4".[7] He was eventually named in Rainbow Falls.

Bulk Biceps first appears in the opening scene in Hurricane Fluttershy where he gives the first of what would be several emphatic "YEAH"'s during Rainbow Dash's speech. He makes several more appearances throughout the episode, most of which are accompanied by another shout of "YEAH!" He flies among the rest of the Pegasi in the hurricane and isn't noticeably impeded by the smaller size of his wings.

Bulk Biceps later appears as a trainee in Wonderbolts Academy. When sized up by Spitfire of the Wonderbolts, he's instantly intimidated by her. During training, he is Cloud Chaser's wing pony. Like his fellow Wonderbolts trainees, he ends up stuck in clouds due to Lightning Dust's eccentric flying. In a cloud clearing exercise, he busts clouds with his teeth rather than his hooves, letting out another "YEAH!" Later, when Rainbow Dash's friends are saved from danger, he catches the care package they had made for her. Finally, when Rainbow Dash is made a lead pony (after Lightning Dust's discharge from the academy), he salutes her.

Bulk Biceps appears again in the season four episode Flight to the Finish, during Hearts Strong as Horses, holding one end of a tug-of-war rope in his mouth and eventually lets go of it when a butterfly scares him away.

He appears in the episode Rainbow Falls as one member of a three-Pegasus relay team consisting of himself, Rainbow Dash, and Fluttershy. The three represent Ponyville and compete to qualify for the Equestria Games. Throughout the episode, Bulk Biceps struggles to overcome the relay course. Unlike his participation in the hurricane, while flying alone his diminutive wing size makes him much slower than even Fluttershy. His bulky torso also makes it difficult to squeeze through the rings in the obstacle portions of the course. Eventually his along with his teammates' determination earns them a qualifying spot in the Games. Bulk's agility improves, and he is able to contort his way through a ring to pass the horse-shoe to Fluttershy. Bulk Biceps' speaking role in this episode is more prominent compared to his past series appearances.

In Simple Ways, Bulk appears in the crowd during the choosing of the pony of ceremonies for the Ponyville Days festival. In Inspiration Manifestation, Bulk appears at the "Test Your Strength" bell, which Pinkie hits her head on.

Bulk Biceps appears with his team in Equestria Games.

In Castle Sweet Castle, Bulk Biceps appears as a masseur at the Ponyville Day Spa.

In Slice of Life, Bulk appears during Cranky Doodle Donkey's and Matilda's wedding and also gets hugged by a weeping Steven Magnet.

He also appears in the final group shot during Friends Are Always There For You in The Cutie Re-Mark - Part 2.

Bulk Biceps appears in On Your Marks with a cutie mark problem for the Cutie Mark Crusaders. Having lifted every dumbbell in Ponyville, he doesn't know what to do next. Scootaloo suggests that he try lifting other things, and Sweetie Belle suggests teaching other ponies to lift things after he himself runs out of things to lift.

In No Second Prances, Bulk Biceps appears at the Ponyville Day Spa, working as a masseur. In A Hearth's Warming Tail, he appears during Hearth's Warming Eve Is Here Once Again (Reprise). In Applejack's "Day" Off, he gives Mr. Cake a painful-looking massage at the spa.

In The Cart Before the Ponies, Bulk appears as an Applewood Derby spectator wearing a drinking helmet. In The Fault in Our Cutie Marks, Bulk appears teaching a pair of foals how to weight-left. He also appears briefly during Find the Purpose in Your Life.

In All Bottled Up, Bulk Biceps appears managing a cinnamon nut cart. However, he ends up as one of several ponies infected by Starlight Glimmer's anger when the bottle containing her anger shatters, and he takes this anger out on Trixie. After being restored to normal, he realizes he is late for his other job at the Spa. In Forever Filly and Marks and Recreation, a picture of Bulk appears on a wall in the Crusaders' clubhouse alongside pictures of other ponies whose cutie mark problems they helped with.

In A Rockhoof and a Hard Place, Bulk Biceps gets a massage from Rockhoof at the spa, but Rockhoof presses too hard on Bulk's back, causing him to scream and run out of the spa.

In She's All Yak, Bulk Biceps appears in the reused image of The Cutie Re-Mark - Part 2 during Fit Right In.

In The Last Crusade, Bulk makes an appearance during the CMC Appreciation Day celebration. In Between Dark and Dawn, Bulk appears at the spa, helping with Princess Luna and Princess Celestia's makeovers.

In A Trivial Pursuit, Bulk participates as a contestant in the Trivia Trot contest, paired up with Fluttershy. In The Big Mac Question, Discord mentions that Bulk went out on a date with Octavia Melody.

In The Ending of the End - Part 2, Bulk takes part in the final battle against Queen Chrysalis, Lord Tirek, and Cozy Glow. In The Last Problem, he briefly appears in Fluttershy's group shot during The Magic of Friendship Grows.

In My Little Pony The Movie, Bulk Biceps first appears winning a high striker game during We Got This Together. At the end of the movie, he shouts his catchphrase before Songbird Serenade's performance of Rainbow, and he appears behind a velvet rope divider during the animated credits.

Bulk appears in Flutterdash, The Great Divide, The Great Collide, and Spectacular Musical Musak-ular as the host of the Sportacular Spectacular. He is also known as "The Spirit of Competition".

Rainbow Dash and the Daring Do Double Dare chapter 7 refers to "Snowflake—the strongest Pegasus in Cloudsdale", and Applejack and the Honest-to-Goodness Switcheroo mentions Snowflake as being a former contestant of the Sweet Apple Acres Pie-Eatin' Extravaganza, both likely in reference to Bulk Biceps under a name previously used by Andy Price[8] and earlier by the fan community;​[​citation needed​]​ this name was used by Hasbro for G1 and G3 Earth pony mares. In Discord and the Ponyville Players Dramarama, Bulk Biceps appears as a "stagehoof" during the Ponyville Players Spring Musical.

BULK BICEPS is a huge pony with tiny wings, but he can fly with the best of them. He's a new cadet at the Academy, but he's also represented Ponyville in the Equestria Games relay, been a masseuse at the La Ti Da Spa in Ponyville, and even taught foals how to lift heavy things. He's afraid of butterflies.

Bulk Biceps appears on the season two poster behind Flitter and Cloud Chaser, grouped with other Pegasi from Hurricane Fluttershy. He is titled "MUSCLE PONY" in the 2013 guidebook The Elements of Harmony.

Series 2 of Enterplay's trading cards includes a Flitter & Cloudchaser card, #17. The back of the card lists Bulk Biceps (along with Rumble and Thunderlane) as a friend.

A​[​specify​]​ magazine gives Bulk Biceps the description "He may have small wings, but this brawny pony is a gifted Wonderbolts trainee. He's also a famous weightlifter and a masseur at La-Ti-Da Spa."[9]

Bulk Biceps: Don't know why you're evil, but you are killing it! Yeah yeah!
Twilight Sparkle: Sometimes the cupboard is empty, apparently.
Bulk Biceps: Yeaaah! 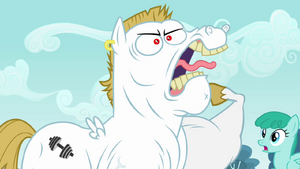