Bulk Biceps' human counterpart appears in the My Little Pony Equestria Girls franchise. He is a student at Canterlot High School.

In My Little Pony Equestria Girls: Rainbow Rocks, Bulk Biceps appears in the gym when Principal Celestia and Vice Principal Luna are on stage. He also participates in the CHS Musical Showcase playing the violin. He eliminates MC Snips and DJ Snazzy Snails in the first round, but he is eliminated by the Rainbooms in the second. He is also seen fighting with Derpy while Lyra Heartstrings and Sweetie Drops restrain her. During the ending credits, he helps lift up Sunset Shimmer so she can reach Angel on a hard-to-reach perch.

Bulk makes several appearances in Legend of Everfree, including suggesting arts and crafts as a possible Camp Everfree activity, claiming that his mother needs new pot holders. He later notices gem dust by the rock-climbing wall, panics over the sudden appearance of "Gaea Everfree", hugs Sandalwood and Trixie at the end of the battle, and dances at the Crystal Ball fundraiser during Legend You Were Meant To Be.

In the musical short Good Vibes, Fluttershy gives Bulk Biceps a "squirrel toupee" after Pinkie Pie accidentally exposes his bald spot, and he helps Twilight Sparkle carry boxes to her electronics store at the Canterlot Mall.

In the Better Together short Queen of Clubs, Bulk Biceps appears as a member of the Canterlot High School knitting club. He also appears in A Little Birdie Told Me watching Fluttershy solve a complex math problem in Cranky Doodle's class. He makes background appearances in the beach shorts X Marks the Spot, Aww... Baby Turtles, and Too Hot to Handle. In Turf War, lifeguards Applejack and Timber Spruce save him from drowning.

In the second season short Best in Show: The Pre-Show, he enters the Canterlot High pet show with his pet dog Wooyoo. In Best in Show: The Victory Lap, they appear as participation winners and he smiles at Wooyoo's interest in Tank. In Schedule Swap, he appears modelling in art class and later has lunch in the cafeteria. In Twilight Under the Stars, he attends the Canterlot Celestial Society Members' Social. In I'm on a Yacht, he shows concern for a sunburned Applejack and later dances at the pool party aboard the Luxe Deluxe. In Festival Looks, he appears in a computer video call profile picture. In Five Lines You Need to Stand In, he appears in the Starswirled Music Festival's bathroom line and dances when Pinkie Pie turns it into a conga line. In Find the Magic, he appears as a silouhette attending the Dazzlings' performance. In Cheer You On, he attends Flash Drive's concert in the school gymnasium and runs away with most of the other students when the gym is attacked by Micro Chips' rampaging robot. In Do It For the Ponygram!, he appears with Wooyoo before Pinkie Pie uses an app to turn Wooyoo's head into a vanilla swirl cupcake.

In the Choose Your Own Ending short Best Trends Forever, Bulk appears adopting Rarity's establish trends in the Twilight Sparkle and Rainbow Dash endings. He is mentioned by Pinkie Pie in her ending of Stressed in Show, recommending that Twilight get a relaxing massage from him. Bulk also appears in the Micro Chips ending of All the World's Off Stage pulling the stage backdrop during a rehearsal of the school play and in Opening Night playing a lump of coal in the play. In Happily Ever After Party, he appears during the school play's curtain call and attends the after-party in the Rarity and Rainbow Dash endings. In the Applejack ending, he appears in a video slide being played at the party.

In the second season, Bulk Biceps appears attending DJ Pon-3's concert at the Starswirled Music Festival in The Last Drop. In Lost and Pound, he appears in front of a festival food truck and appears in a photo booth with Derpy in the Rarity ending and talking to Derpy in the Spike ending. In Accountibilibuddies, he accidentally steps on Applejack's foot while dancing at the festival. He attends Dirk Thistleweed's performance in the Pinkie Pie and Snips endings. In The Road Less Scheduled, Bulk appears dancing at the festival with Snips and Derpy and accidentally destroys Twilight's phone when it lands on his sweaty body. He is a possible ending in Sock It to Me, where he gives Rainbow Dash a smelly gym sock to replace her missing lucky sock for a soccer game in order to teach her a lesson on self-confidence. In Costume Conundrum, Bulk Biceps hosts a costume party at his house. He appears in a ancient Roman soldier costume in the Applejack and Sunset Shimmer endings, and has a speaking role in the latter, getting scared by Fluttershy's monster costume.

Bulk Biceps makes a background appearance sunbathing on the beach. He later appears getting his temperature taken by Nurse Redheart. He is also voted for the "Best Muscles" superlative, and ends up with his yearbook photo on the page opposite of the Equestria Girls, much to Rainbow Dash's ire.

Bulk is among the passengers of the Luxe DeLuxe cruise liner. When the ship sinks, he is rescued by the Equestria Girls, and he transforms into a pony when everyone travels to Equestria in order to return home.

Bulk appears in the beginning of the special just as the Equestria Girls arrive at the Starswirled Music Festival, pitching a tent with Derpy, again at the festival security line talking to Trixie, and at the PostCrush concert.

In "Saving Pinkie's Pie", Bulk can be seen taking part in the big snowball fight. In "Dashing Through the Mall", he appears shopping with Derpy at the Canterlot Mall. In "O Come, All Ye Squashful", he is seen walking through Canterlot High with his arm around Derpy.

Bulk appears in the "Forgotten Friendship" novelization A Friendship to Remember, his role essentially the same as the special.

"This lump of coal is gonna be cut like a diamond!"
— All the World's Off Stage

"I battled the ropes, and I won!"
— All the World's Off Stage 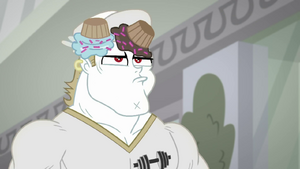