Start a Wiki
"Bushel"
Bushel is the placeholder name of a male Earth pony and a member of the Apple family. He has a golden coat, a two-tone green mane, green eyes, and a cutie mark of a bucket of apples in water.

Bushel shares his design, mane colors, cutie mark, and hat design with S04E22 Unnamed Earth Stallion #6, his design, eye color, and hat with S04E22 Unnamed Earth Stallion #5, his design and eye color with "Apple Slice", his coat and mane colors with Perfect Pie and "Apple Squash", and his coat and eye colors with Half Baked Apple, and he has a similar color scheme to Sandalwood.

Bushel first appears in the season three episode Apple Family Reunion. He attends the reunion with other Apple family members and takes part in the raising of the new barn at Sweet Apple Acres during Raise This Barn. He also appears in the family photo in front of the rebuilt barn.

In Filli Vanilli, Bushel appears as a spectator of the Ponyville turkey call competition. In Leap of Faith, he walks toward Flim and Flam's tent at the beginning of the episode.

In Appleoosa's Most Wanted, Bushel together with Florina Tart, Candy Apples, and Apple Cinnamon, appears as a member of Applejack's team during the Appleloosa rodeo's hay bale stacking event.

In The Beginning of the End - Part 2, Bushel briefly appears as one of King Sombra's mind-controlled slaves on a Canterlot Castle Balcony. In Growing Up is Hard to Do, he appears operating a carnival game at the Appleloosa County Fair. 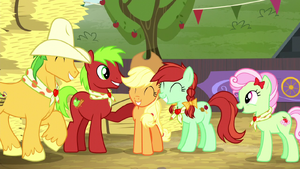 Retrieved from "https://mlp.fandom.com/wiki/Bushel?oldid=2159533"
Community content is available under CC-BY-SA unless otherwise noted.