Button Mash is an Earth pony colt with a brown coat, two-tone orange mane and tail, reddish brown eyes, and in Gameloft mobile game artwork a cutie mark of a D-pad.[1][2][3] He first appears in the season two episode Hearts and Hooves Day. He is unnamed in the show, but he is named "Button Mash" in some other media and both "Button" and "Button Mash" by Hasbro Studios legal counsel.

Button Mash shares his design with Strike, "Shady Daze", "Green Daze", and "Caramel Coffee", and depending on the angle, he shares his mane style with Scootaloo and Archer. Outside of Ponyville Confidential, he wears the same propeller beanie as Screwball.

On September 30, 2013, the official Facebook page of Gameloft's mobile game was asked "Any chance we can get Fluffle Puff, Button Mash, and Button's mom into this game?" and replied "Well, we don't have such current plans :(".[4] On March 18, 2014, legal counsel for Hasbro, Inc. and Hasbro Studios LLC issued a cease-and-desist to artist/animator JanAnimations for use of Button Mash and other series characters in his fan-made series Button's Adventures. In the message, Button Mash is identified by name. In mid-January 2015, Jim Miller was asked "Is it true that Button Mash is going to appear in S5? People related to Jan Animation say so", replied "Nope. We don't put fan OCs in the show",[5] was subsequently asked "But didn't Button Mash make a cameo in Hearts & Hooves, before getting fan named?", and subsequently replied "Yes, so technically not an OC. He was appropriated (for lack of a better term) by fans."[6]

Button Mash's color scheme was changed between Ponyville Confidential and Slice of Life, being browner in season two and redder in both season five onward and other materials.

Button Mash first appears in Hearts and Hooves Day during the song The Perfect Stallion. While he plays an arcade machine, Sweetie Belle comes over and sings that he's "too young" for Cheerilee.

He later appears in Ponyville Confidential, holding a copy of the Foal Free Press in his mouth and in line to get Snips and Snails' autograph after their gum mishap earns them schoolyard fame.

Button Mash appears in Slice of Life. He first appears outside the Ponyville bowling alley observing the Mane Six and later plays an arcade game in Dance Fever and Hughbert Jellius' company before being picked up by DJ Pon-3's mobile DJ station.

Button appears in the audience of the dance recital in On Your Marks. He also appears in the final group shot in A Hearth's Warming Tail and watching Gabby play baseball in The Fault in Our Cutie Marks.

In Parental Glideance, Button appears in the audience watching the Wonderbolts perform.

In The Break Up Break Down, Button Mash is one of the possible candidates that the Cutie Mark Crusaders consider for Sweetie Belle's secret admirer. In Yakity-Sax, he appears in the crowd watching the Wonderbolts Derby. In The Washouts, he makes background appearances attending the titular group's two Ponyville shows.

Game-Playin' Schoolpony is a character in Gameloft's mobile game, added as Button Mash in version 3.6.0 and given his current title in version 3.7.0. His in-game description states, "This gamer colt treasures his favorite beanie. (...Propellors ARE awesome. Now don't be a meanie!)"

"Vote for Pip!"
— During The Vote in Crusaders of the Lost Mark 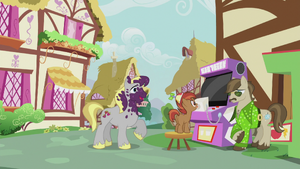