Call of the Cutie

Call of the Cutie is the twelfth episode of the first season of My Little Pony Friendship is Magic. In this episode, Apple Bloom becomes concerned about her lack of a cutie mark and tries to earn it before an upcoming party. At the party, she ends up befriending Scootaloo and Sweetie Belle, and they form the Cutie Mark Crusaders.

In a storyboard by Sabrina Alberghetti for this episode, Neon Lights and either Comet Tail, "Written Script", or S04E22 Unnamed Unicorn Stallion #3 appear instead of Cherry Fizzy and "Ponet", respectively. Lyrica Lilac was also to appear in the episode.[2]

Although Apple Bloom, Sweetie Belle, and Scootaloo introduce themselves to each other in this episode, they appear together in the first episode when they huddle in fear around 20:23 during Nightmare Moon's entrance. A layout artist working on the show explained that this was an error on his part, and that the ponies huddling together were supposed to be different ponies.[3]

On the Canadian television channel Treehouse, Silver Spoon saying "We still think you're losers" was muted out, the same as it was on Party of One. The Verizon FiOS and AT&T U-verse schedules inaccurately use Apple Bloom's alternate name Apple Blossom.

In the Ponyville Schoolhouse, Cheerilee begins a lesson on cutie marks. She explains that her cutie mark, a trio of smiling flowers, represents her wish for her students to bloom and learn cheerfully. She asks the class when a pony’s cutie mark appears, and Twist answers that it appears when the pony discovers what makes him or her special. Diamond Tiara whispers to Apple Bloom and passes her a note. Cheerilee catches Apple Bloom passing the note and finds it to be blank. Diamond Tiara quips, "Remind you of anypony?" and Apple Bloom sheepishly looks down at her blank flank.

After class, Twist invites Apple Bloom to various activities, but Apple Bloom, who appears downcast, declines. Diamond Tiara and Silver Spoon show up and start teasing Apple Bloom and Twist for not having cutie marks, calling them "blank flanks." They invite the blank flanks to Diamond Tiara's "cute-ceañera", which Diamond Tiara says is "a party celebrating me and my fantastic cutie mark."

The scene cross-fades to the Sweet Apple Acres orchards. Applejack reassures Apple Bloom, telling her that every pony gets their cutie mark eventually. Applejack says that Granny Smith, Big McIntosh, and herself were all the last ponies in their class to get their cutie marks. Apple Bloom is upset about this, believing that the delay "runs in the family.” She excitedly repeats the phrase and concludes that her special talent, like those of her family, must be related to apples.

In the town square, Applejack and Apple Bloom have set up an apple stand. Apple Bloom’s sales pitch is "You can eat 'em, play with 'em, create fine art for your home with 'em!" but her antics only annoy nearby ponies. She aggressively badgers Dr. Hooves into buying apples. Apple Bloom excitedly checks her flank, but no cutie mark is there. She becomes determined to "increase her sales figures". She frightens away Berryshine by snarling "YOU TOUCH IT, YOU BUY IT!" She then loads Sweetie Drops’s bag with apples and accuses her of taking them, then demands four bits. Applejack apologizes to the ponies and tells Apple Bloom to not force her cutie mark to appear. Applejack ends up filling Sweetie Drops's bags with apples and gives her a bonus basket of apples, all for free.

Following Applejack’s suggestion, Apple Bloom goes to Twist and asks her if she wants to go to Diamond Tiara's cute-ceañera together since they both don't have a cutie mark. However, Twist has already gotten her cutie mark after discovering that making sweets is her "super-special talent." Silver Spoon and Diamond Tiara walk by and continue to tease Apple Bloom for having a blank flank.

The scene cuts to a gloomy Apple Bloom sitting by a well. Rainbow Dash shows up and pushes away a literal dark cloud over Apple Bloom's head. After listening to Apple Bloom’s complaints, Rainbow Dash claims that she can make the cutie mark appear. She tells Apple Bloom that she was the first in her class to earn her cutie mark after discovering her "need for speed."

The scene cross-fades to Apple Bloom doing exercises, and Rainbow Dash tells her that the key is "to try as many things as possible as quickly as possible.” Apple Bloom tries juggling, hang-gliding, karate, kite-flying, and "Ultrapony Roller Derby", but she fails at each of these. After the sports montage, Rainbow Dash and Apple Bloom are resting when Diamond Tiara and Silver Spoon walk by. Apple Bloom ducks into a bush to hide from them. As Rainbow Dash reviews a list of sports and activities, Pinkie Pie shows up and suggests that Apple Bloom might be good at eating cupcakes.

Apple Bloom thanks Rainbow Dash and the scene wipes to Sugarcube Corner, where Apple Bloom volunteers to help Pinkie make some cupcakes. Pinkie sings the Cupcake Song to teach her how to make cupcakes. During the song, Pinkie cartoonishly appears in multiple places at once and pops out from behind unexpected places, like a ceiling lamp.

Apple Bloom takes a tray of burnt cupcakes out of the oven, and Pinkie Pie comments that "those look much better than the last batch." Apple Bloom decides she's not cut out to be a baker and whines at the idea of being a blank flank forever. Pinkie Pie points to something on Apple Bloom's flank, but it turns out to be just a smudge of flour.

Twilight Sparkle enters the bakery and Pinkie offers her some burnt cupcakes, which she declines. Apple Bloom asks Twilight to use magic to make her cutie mark appear, but Twilight tells her she has to discover it on her own. Apple Bloom begs her, and she reluctantly agrees. Each of the cutie marks that Twilight conjure last for only a fraction of a second. Twilight gives up and says:

"Told you that not even magic can make a cutie mark appear before its time."
— Twilight Sparkle

The scene cuts to Apple Bloom at the cute-ceañera at Sugarcube Corner. She ducks under a table with a long tablecloth and carries it to the exit. As she tries to sneak out, she bumps into Applejack, who unwittingly pushes her all the way back into the room. When Silver Spoon and Diamond Tiara spot Apple Bloom, she grabs a tablecloth and turns it into a dress to hide her flank. She lies and says that she got her cutie mark earlier. When Diamond Tiara calls her bluff, Apple Bloom claims she didn’t want to outshine Diamond Tiara at her own cute-ceañera. Unfortunately, she stumbles over her dress and bumps into a phonograph, which makes the needle loudly scratch the record, drawing the attention of the guests.

"She could be a great scientist, or an amazing artist, or a famous writer. She could even be mayor of Ponyville some day."
— Sweetie Belle

Twilight says they're three very lucky fillies who have yet to discover who they are. The guests crowd around the three fillies and Diamond Tiara is aggravated because she's not getting all the attention.

Scootaloo, Sweetie Belle, and Apple Bloom introduce themselves to each other, and they discuss the formation of a secret society dedicated to getting their cutie marks. They agree on the name “the Cutie Mark Crusaders”. The episode ends with a voiceover of Twilight's friendship report, which starts with Twilight's narration and ends with Princess Celestia's narration, fading out on a shot of Celestia’s cutie mark, a stylized sun.

Apple Bloom: Woo-hoo! That's how you sell some apples and get a cutie mark! So, what does my cutie mark look like? A shoppin' bag full of apples? A satisfied customer eating an apple? Hmm... maybe I gotta increase my sales figures first. You touch it, you buy it! We take cash or credit.

Rainbow Dash: Wow, looks like some pony's got a dark cloud hanging over her head. Let me do something about that. What's the matter, kid?
Apple Bloom: There's a cute-ceañera this afternoon and everypony in my class will be there and they'll all have their cutie marks and I wanna get my cutie mark, but I'm no good at sellin' apples but I really wanna go to the party but how can I go to the party if I don't have my cutie mark which my big sister says I'm gonna get eventually but... I want it now!

Apple Bloom: Twilight, you have to help me!
Twilight Sparkle: What's the matter?
Apple Bloom: [inhales] Tiara's cute-ceañera is today and everypony in my class will be there and they’ll all have their cutie marks and I wanna get my cutie mark, but I'm no good at selling apples or hang-gliding or making cupcakes but I wanna go to the party but how can I go to the party if I don't have my cutie mark, which Pinkie Pie says I can't just make appear but I need it to appear... right now!

Scootaloo: I said, you got a problem with blank flanks?
Silver Spoon: The problem is, I mean, she's like, totally not special.
Sweetie Belle: No, it means she's full of potential.
Scootaloo: It means she could be great at anything. The possibilities are, like, endless.
Sweetie Belle: She could be a great scientist, or an amazing artist, or a famous writer. She could even be mayor of Ponyville some day.
Scootaloo: ...and she's not stuck being stuck-up like you two. 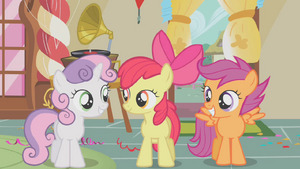 Call of the Cutie image gallery