Campfire Tales is the sixteenth episode of season seven of My Little Pony Friendship is Magic and the one hundred and fifty-ninth overall.

In this episode, Applejack, Rarity, and Rainbow Dash tell Apple Bloom, Sweetie Belle, and Scootaloo about their favorite legends after their camping trip is ruined by Fly-ders.

This episode was initially scheduled to premiere on Canada's Treehouse TV channel on June 10, 2017[1] but was later replaced by a repeat of Fluttershy Leans In.

When asked whether Mistmane's tale was inspired by Chinese or Japanese culture in a Q&A on Twitter on September 3, 2017, supervising director Jim Miller replied "Just Asian influences in general. Not one specific culture."[2]

The episode opens in the middle of the woods, where Applejack and Apple Bloom are setting up for their annual big-sister/little-sister camping trip. Rarity and Sweetie Belle also soon arrive, with Rarity having packed lighter than their first camping trip. Rainbow Dash and Scootaloo are also nearby picking berries. After their first camping trip together, Scootaloo is still nervous about the woods' potential dangers, but her "big sister" Rainbow says she'll look after her.

As the ponies finish setting up camp, however, they are suddenly surrounded by a large swarm of Fly-ders—spiders with wings. They take shelter from the swarm's bites and webs in a nearby cave. Applejack explains that the typically Luna Bay Area-indigenous Fly-ders were probably attracted by the camp food and that they'll have to wait until the swarm moves on, much to Apple Bloom's disappointment.

After making a campfire, Applejack, Rarity, and Rainbow Dash offer to tell the fillies stories to pass the time. Applejack starts off by telling her and Apple Bloom's favorite legend: the legend of Rockhoof.

In Applejack's story, Rockhoof is a scrawny Earth pony colt who lives in a village at the foot of a giant volcano. The village is protected by a group of elite pony guards called the Mighty Helm. Rockhoof dreamed of becoming a member of the Helm, but his weak stature and inability to lift an axe got in the way, bringing him ridicule from the other guardponies.

One day, while Rockhoof was digging holes with his shovel, the volcano explosively erupts, threatening to cover the village in lava. Unable to think of a way to save the village, the Mighty Helm orders its immediate evacuation, but the villagers are reluctant to leave the home where they spent their entire lives. Rockhoof, however, uses his shovel to start digging a trench to divert the lava away from the village, even though he couldn't dig fast enough.

Suddenly, in the middle of Rockhoof's digging, a mysterious magic surrounds his shovel, and he transforms from a scrawny colt to a brawny stallion. With his newfound strength, Rockhoof is able to dig multiple times faster than before, and he successfully diverts the lava into the ocean. For his bravery and determination, Rockhoof is invited to join the Mighty Helm's ranks.

Back in the cave, Applejack's friends are very entertained by her story. Unfortunately, the Fly-der swarm has not yet moved on outside, having covered the ponies' entire campsite in spider webs. Sweetie Belle is disappointed to have abandoned their beautifully-made camp for such a drab-looking cave, but Rarity assures her that there is beauty in everything, which she demonstrates by uncovering flecks of gold in the cave walls and making shadow puppets. To further illustrate her point, Rarity decides to tell Sweetie Belle her favorite legend: the legend of Mistmane.

In Rarity's story, Mistmane is a talented unicorn sorceress who is hailed and beloved as the most beautiful pony in Equestria. Some time after being accepted into a prestigious magic school, Mistmane receives a letter saying her best friend Sable Spirit was crowned empress of her old village home. However, when she returns home, she finds it a dismal dictatorship where the empress keeps the villagers working all hours on her palace and takes everything with beauty for herself.

Mistmane confronts Sable Spirit in her palace and demands an explanation. Sable explains that she was always jealous of Mistmane's beauty and talent, and after she left for magic school, Sable used a spell to make herself beautiful. The spell backfired, however, and made her hideous. Therefore, she decided if she couldn't have beauty, she would take it from everyone and everything else. Mistmane refuses to allow this, and she faces Sable Spirit in a magic duel. After a fierce clash of fire- and water-conjuring spells, Mistmane wins by trapping Sable in a cocoon of plant roots.

Afterward, Mistmane plants a flower at the center of the village and uses her magic to restore its beauty—as well as Sable Spirit's—while also sacrificing her own beauty. Sable Spirit is so moved by Mistmane's sacrifice that she rules with kindness and compassion from then on. Though Mistmane is no longer physically beautiful, she dedicates her life to spreading beauty all over Equestria.

Try to be brave

Sweetie Belle is very moved by Rarity's story, declaring Mistmane to be her favorite legend as well. Suddenly, the Fly-der swarm outside the cave starts to make its way inside. Rainbow Dash collapses the cave entrance to block their entry, but she and her friends are now trapped inside the cave. As Scootaloo gives in to overwhelming panic, Rainbow Dash tries to calm her down and cheer her up by telling her favorite legend: the legend of Flash Magnus.

The legend of Flash Magnus

In Rainbow Dash's story, Flash Magnus is a cadet in the Cloudsdale Royal Legion during a time before the founding of the Wonderbolts. One day, while flying over the Dragon Lands to reach their teammates on the other side, the Legion is intercepted and attacked by dragons, including Torch. Several members of the Legion are captured and taken to the dragons' lair.

Flash Magnus wants to rescue their captured comrades, but Commander Ironhead forbids it, saying the dragons are too powerful to challenge head-on. Therefore, Flash volunteers to lure the dragons away from their lair so that Ironhead and the rest of the Legion can retrieve their friends. Ironhead recognizes Flash's bravery and gives him the fireproof shield Netitus to assist in his mission.

After Flash gets the dragons' attention and lures them away from their lair, Ironhead and his soldiers infiltrate the cave. Once the captured Legionnaires are saved, Ironhead and the Legion gather together a large collection of storm clouds, which Flash leads the pursuing dragons into. Overwhelmed by lightning, the dragons retreat. Flash is praised by his fellow Legionnaires for his bravery, and Commander Ironhead allows him to keep the Netitus shield.

Scootaloo is indeed cheered up by Rainbow Dash's story, and Rainbow says Flash Magnus has always inspired her to be brave and awesome. When Applejack no longer hears the Fly-ders buzzing outside the cave, she realizes the swarm has finally left. However, with the front entrance blocked off, the ponies decide to venture deeper into the cave to find another way out. Scootaloo is nervous about this, but Rainbow Dash tells her to be brave like Flash Magnus.

The ponies eventually come across a stream that empties into the rushing waters of Winsome Falls. Applejack apologizes to the Cutie Mark Crusaders for the disappointing camping trip, but the fillies say they enjoyed themselves and want to stay. Inspired by the legendary stories they just heard, the Crusaders decide to make the most of their situation and have fun in the areas around Winsome Falls.

"I can't wait to see what happens next year!"
— Scootaloo

Apple Bloom: Remember the first time we came here and Rarity had that ginormous tent?
Rarity: I heard that! [giggles] I've gotten much better at "roughing it", haven't I?
Sweetie Belle: Yup. This time, you only packed three suitcases.

Rainbow Dash: You want stories? I've got a ton of stories! Spoiler alert – they're all about me and how awesome I am!

Applejack: Rockhoof was known far and wide for his incredible strength. But he didn't start out that way. You see, Rockhoof was a tiny little fella, the son of a farmer.
Apple Bloom: Just like us!

Rainbow Dash: Mistmane? Isn't she the old wrinkly sorceress with the flower?
Rarity: Yeeees, but did you know she used to be the most beautiful unicorn in all the land?
Rainbow Dash: [flatly] No.

Sweetie Belle: If somepony told me either one of you two'd gone evil...
Scootaloo: Yeah, I'd never believe it.
Apple Bloom: I dunno. I've seen the way you two get when you miss breakfast.

Mistmane: What good is a pretty palace if it just hides the misery of its ponies?

Apple Bloom: You can't outfight dragons.
Rainbow Dash: But you can out-think them.

Flash Magnus: Is this... Netitus, the fireproof shield?!
Commander Ironhead: It has protected Legion heroes for generations. And today, I can't think of a worthier flank for Netitus to protect.

Applejack: We're gonna have to see if we can get out the other way.
Scootaloo: You mean go further into the dark, spooky cave?!
Rainbow Dash: Scootaloo, just remember the story. Gotta be brave like me and Flash Magnus, okay?

Applejack: We sure are sorry that our camping trip wasn't what we hoped it would be.
Apple Bloom: Are you kidding? This trip is awesome!
Rarity: It is?
Sweetie Belle: We got to hear legendary stories and go on an adventure.
Applejack: Wait, you three wanna stay?
Cutie Mark Crusaders: Of course we do! 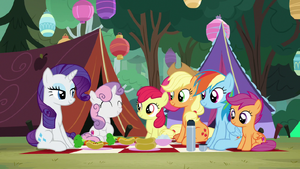