Candy Apples is a background Earth pony and a member of the Apple family. She has a pale green coat, a two-tone red mane, orange eyes, and a cutie mark of a candy apple and caramel apple. She is unnamed in the show, but she is named in merchandise and other media.

Her names are respectively almost the same and the same as that of G3 Earth pony mare Candy Apple, whose mane color and cutie mark are also similar to hers.

Candy Apples first appears in the season three episode Apple Family Reunion. She attends the eponymous reunion with other Apple family members, has a run-in with a swarm of fruit bats during a family hayride, takes part in the raising of the new barn at Sweet Apple Acres during Raise This Barn, and appears in the family photo.

In Games Ponies Play, Candy Apples appears briefly at the Crystal Empire train station when Twilight Sparkle and her friends are looking for the real Equestria Games inspector.

Candy Apples appears in Filli Vanilli as a spectator of the Ponyville turkey call. She later appears at the Rainbow Falls Traders Exchange in Trade Ya! during Pinkie Pie's auction of Princess Twilight's books.

In Appleoosa's Most Wanted, Candy Apples, together with Bushel, Florina Tart, and Apple Cinnamon, appears as a member of Applejack's team during the Appleloosa rodeo's hay bale stacking event. In Slice of Life, Candy Apples appears at Cranky Doodle Donkey and Matilda's wedding.

Candy Apples appears as a filly during You're In My Head Like a Catchy Song in The Perfect Pear. In Fame and Misfortune, she takes a selfie with Applejack.

In The Beginning of the End - Part 2, Candy Apples briefly appears as one of King Sombra's mind-controlled slaves.

Candy Apples is a character in Gameloft's mobile game, added in the version 2.0 update on October 6, 2014. Her in-game description states "Candy Apples is a country lovin' cowpony who loves nothing more than getting her green hooves on her favorite sweet and sticky treat." An October 3–6, 2014 post by the official Facebook page of the game refers to her as Candy Apple, a name previously used for a G3 pony.[2]

Candy Apples is named with a trademark symbol in the eleventh and thirteenth waves of mystery pack toys and collector cards, which state that she "makes homemade treats for her friends!" and "She loves making treats!" A yellow-maned prototype version of the wave 11 mini-figure has been displayed at the 2014 American International Toy Fair.[1] She also appears on WeLoveFine's fan-designed "Apple Family Portrait" art print. 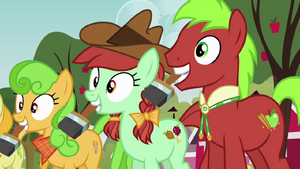