Candy Mane is the placeholder name of a female Earth pony with an apricot color coat, light grayish-rose and moderate-cerise wavy-streaked mane, and moderate cerise eyes. She has a cutie mark of a pair of pony silhouettes, a row of pink bubbles, or a bunch of grapes and a strawberry, this however is absent in most of her appearances.

In mid-March 2011, Lauren Faust was asked "Hi Lauren, I have a question... Is everypony in the crowd in Show Stoppers [link]@ supposed supposed to have a 'blank flank', as in some sort of Easter Egg? Or was it a silly mistake" and answered "It was just an oversight. Wish I had a more interesting answer for you. Sorry."[1]

In late April 2011, layout artist "FlashinthePan" was asked regarding this pony "Hey, FitP, I noticed an adult pony in the background once. It looks suspiciously like an adult scootaloo, Is this just a coincidence or did the character design of scoots come from this background pony" and answered "Gotta be a coincidence. But I'm not sure where she comes from, since she's not in the general file for incidental ponies (that I remember). She must be elsewhere, like 'incidental_party_pony' or something."[2][3]

Candy Mane makes her first appearance in Friendship is Magic, part 1 during the Summer Sun Celebration, shortly before Nightmare Moon arrives and also during her episode-closing speech (she makes an identical appearance in the previous episode recap in part 2). In The Ticket Master, she briefly appears in Rainbow Dash's fantasy of the Grand Galloping Gala. In Boast Busters, she appears at regular points during Trixie's magic show and near the end of the episode following Twilight Sparkle's "vanquishing" of the ursa major.

She watches the Iron Pony competition and the Running of the Leaves in Fall Weather Friends, Rarity's fashion show in Suited for Success, the Cutie Mark Crusaders' talent show performance in The Show Stoppers, and Fluttershy's second fashion show in Green Isn't Your Color. Candy Mane's last season one appearance is in Twilight's and Rarity's flashbacks in The Cutie Mark Chronicles.

Candy Mane appears in Luna Eclipsed, dressed in a brown cloak for Nightmare Night. In The Mysterious Mare Do Well, she appears with her bubbles cutie mark. She appears in Hearth's Warming Eve during The Heart Carol, in A Friend in Deed near the end of Smile Song, and in A Canterlot Wedding - Part 2 during Love Is In Bloom.

Candy Mane appears in Magic Duel, in a crowd of ponies during Trixie's return. In Magical Mystery Cure, she appears outside the Canterlot castle doors as Life in Equestria begins.

Candy Mane appears at the Summer Sun Celebration near the end of Princess Twilight Sparkle - Part 2. In Simple Ways, she is in the crowd as the Pony of Ceremonies for the Ponyville Days festival is announced. In Filli Vanilli, she appears with her pony-silhouettes cutie mark for the first time. She awaits the arrival of the Breezies in It Ain't Easy Being Breezies and later watches their migration. In Leap of Faith, she appears throughout Flim and Flam's Miracle Curative Tonic song, during which she appears with her fruit cutie mark. She also appears in Trade Ya! In Inspiration Manifestation, she appears with her pony-silhouettes cutie mark for the second time. She appears in Twilight's Kingdom - Part 1 and its recap at the beginning of Twilight's Kingdom - Part 2.

In The One Where Pinkie Pie Knows, Candy Mane appears at the lake party next to Twist. She also appears in The Cutie Re-Mark - Part 2 during Queen Chrysalis' alternate-timeline inside a hut with Twist.

She appears in the outro of Adventures in Ponyville.

Candy Mane appears in a photograph in The Royal Wedding, and in Cutie Mark Magic. 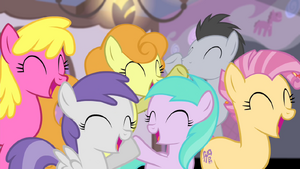