My Little Pony Friendship is Magic Wiki
Register
Don't have an account?
Sign In
Advertisement
in: Pages suggested for renaming, Pages that need improvement, Locations
English

For this location's counterpart in Equestria, see Canterlot.

Canterlot,[1][2][3][4] or Canterlot City,[5][6] is a city in the human world that is featured throughout the My Little Pony Equestria Girls franchise. It is the home of Sunset Shimmer, Twilight Sparkle, their friends, and many other humans. Its most prominently featured location is Canterlot High School, where Sunset and her friends go to school. As with its Equestrian counterpart, Canterlot's name is a portmanteau of "canter," a three-beat horse gait, and Camelot, a British kingdom from Arthurian legends.

Canterlot is a suburban city that appears to be surrounded on all sides by hills and forests. My Little Pony Equestria Girls and My Little Pony Equestria Girls: Friendship Games imply locations like Canterlot High School and Crystal Prep Academy are distant from each other. Twilight Sparkle takes the bus to and from Crystal Prep and Canterlot High in Friendship Games, and Rarity says she has no idea how to get to Crystal Prep from her house in Dance Magic. Dialogue in Driving Miss Shimmer specifies Canterlot is on planet earth. Fluttershy notes birds "starting to head north for the winter" in Street Chic; regarding this, Katrina Hadley was asked "Doesn't Fluttershy mean SOUTH for the winter?" and responded "maybe they live in the Southern Hemisphere."[7]

Canterlot exists in a dimension different from Equestria. Its earliest known discovery in the series is by Star Swirl the Bearded, when he banished Adagio Dazzle, Aria Blaze, and Sonata Dusk to the human world as depicted in My Little Pony Equestria Girls: Rainbow Rocks, My Little Pony: FIENDship is Magic Issue #3, Shadow Play - Part 2, and My Little Pony: Legends of Magic Issue #12. In the first Equestria Girls film, Princess Twilight Sparkle visits the world that Canterlot is in when Sunset Shimmer steals her crown.

Society in Canterlot is considerably more technologically advanced than in Equestria, with smartphones, computers, and the internet being commonplace. In My Little Pony Equestria Girls: Legend of Everfree, Timber Spruce mentions Picasso, an apparent counterpart of the deceased Pinto-Picasso mentioned in My Little Pony Micro-Series Issue #4 and/or "Picture Pattern".

Canterlot has rows and columns of houses and buildings, many intersecting roads, and a river that runs through on one side. The population's primary forms of ground transportation are engine-powered automobiles and public transport buses.

Many areas of the city are horse- and pony-themed, such as the Wondercolt statue at Canterlot High School and the saddle-shaped amphitheater. One area of the city has tall skyscrapers and architectural features similar to Equestria's Manehattan, with one building closely resembling the Crystaller Building.

Canterlot High School is the first and most prominently featured location introduced in Canterlot. It is where Sunset Shimmer and other human teenagers attend high school. Principal Celestia and Vice Principal Luna serve as the school's administration. The base of the Wondercolt statue in front of the school serves as the portal between the human world and Equestria.

The house consists of a house, a barn-like garage, and a pigpen, and it bears a strong resemblance to Sweet Apple Acres in Ponyville.

Pinkie Pie's house is where Pinkie Pie and Maud Pie live. It first appears in Rainbow Rocks when the Mane Seven have a sleepover and pizza party. In the kitchen, Pinkie Pie keeps dozens of whipped cream in the refrigerator.

The Canterlot amphitheater appears in Rainbow Rocks and serves as the venue for the final round of Canterlot High's Battle of the Bands. There are multiple rows of seats arranged in a semicircle, and the stage is shaped like a horse's saddle.

Crystal Prep Academy is a private school that first appears in the Friendship Games short Pinkie Spy and is more prominently featured in the Friendship Games film. It is where Sour Sweet, Sunny Flare, Sugarcoat, and the other Shadowbolts go to school, and it is Twilight Sparkle's original school of attendance before transferring to Canterlot High. Principal Cadance serves as the school's administration.

Twilight Sparkle's house is where Twilight and Spike live. It is first featured at the beginning of Legend of Everfree. In her bedroom, Twilight keeps a large collection of books, various astronomy and chemistry paraphernalia, and an aquarium.

Rarity's house is where Rarity and Sweetie Belle live. The house first appears in the Equestria Girls Holiday Special, and it is featured again in the half-hour special Dance Magic. In her bedroom, Rarity keeps multiple sewing tools, a fainting couch, and a closet full of her old, discarded designs.

The movie studio is featured in the half-hour special Movie Magic. It is where directors such as Canter Zoom and actors such as Chestnut Magnifico film major motion pictures. Among the movies filmed here include the Daring Do film series, Power Ponies, and Stormy with a Side of Pudding.

Sunset Shimmer's house is where Sunset Shimmer lives. It first appears in the My Little Pony Equestria Girls: Summertime Shorts musical short Monday Blues. Features include a television with video game console, a desk with two computer monitors, and a second-story bed decorated with lights. In early May 2015, Ishi Rudell stated that "Sunset Shimmers[sic] residency has been discussed... Perhaps one day it will be revealed."[8] On February 16, 2021, Katrina Hadley stated "1) She's more downtown/ the more run down/older lower rent area. 2) We had limited budget for background design so the exterior may have been slapped together. So, it, doesn't fit?? Exactly?? 3 years back is hard to remember. We didn't have the luxury of making proper floor plans"[9] and "for example- We made her interior bedroom a year or more before we got a script that needed her to go out front of it. So that's how those things get disconnected. You only design what you need at the time. Because there's no guarantee there will be another season etc."[10]

Rainbow Dash's house is where Rainbow Dash lives. It first appears in the Summertime Short Leaping Off the Page. Various items are scattered about the room, and posters, flags, and photographs are taped on the walls.

An unnamed beach takes up the action of a significant portion of Forgotten Friendship and nine of the Better Together (season 1) shorts. Features include two lifeguard perches, a dock with a seaside hut, and a parking lot.

Fluttershy's house is where Fluttershy and Zephyr Breeze live. It appears in the Better Together shorts Festival Looks and Do It For the Ponygram! Items in Fluttershy's bedroom include a computer desk, a beanbag chair, pictures of Fluttershy and Angel on the wall, a bedside drawer, and a wardrobe.

The Sweet Shoppe is a street corner diner in Canterlot that first appears in the first Equestria Girls film. It is run by Mr. and Mrs. Cake, and it is the human world counterpart to Sugarcube Corner.

Carousel Boutique is a clothing outlet in Canterlot that first appears in the first Equestria Girls film. It is also featured in the Rainbow Rocks encore short Life is a Runway. It is owned by Prim Hemline, Rarity works at the boutique as an employee, and it is the human world counterpart of the Ponyville store of the same name.

The Music Center is a store in Canterlot that sells music CDs and musical instruments. It is featured in the Rainbow Rocks short Guitar Centered, in which Rainbow Dash and Trixie have a guitar-shredding competition for a coveted double-necked guitar. DJ Pon-3 works at the Center as an employee.

The Animal Rescue Center is an animal shelter in Canterlot that looks after a large assortment of animals. It is featured in the Rainbow Rocks short Hamstocalypse Now, in which Fluttershy and Rarity corral a habitat of hamsters. Fluttershy works at the shelter as a volunteer.

Everything Under the Sun Emporium

Flim and Flam's Everything Under the Sun Emporium is a pawn shop in Canterlot that buys and sells various items and knickknacks. It is run by twin brothers Flim and Flam and featured in the Rainbow Rocks short A Case for the Bass, in which Applejack attempts to buy her bass guitar back from the twins.

An unnamed diner, identical to where Discord orders a bunch of foods from Princess Twilight Sparkle during Glass of Water in Three's A Crowd, appears at the beginning of Rainbow Rocks where Adagio Dazzle, Aria Blaze, and Sonata Dusk absorb negativity from diner patrons and cause unrest between them.

The Canterlot Mall is featured in the half-hour specials Dance Magic and Mirror Magic. It is a two-story shopping mall with multiple stores and kiosks. Among the stores and areas in the mall include the Aunt Orange smoothie kiosk, a fabrics store, a sunglasses kiosk, a food court, and a movie theater, which is referred to as the Flixiplex Cinemas in the chapter book Magic, Magic Everywhere!, where Juniper Montage works. There is also a large water fountain in the center of the first floor and television monitors throughout the complex. Many of the main characters work at the mall's various venues, as shown in Shake Things Up! and Good Vibes. Applejack works at a juice bar, Sunset works at an Eastern-themed restaurant, Rainbow Dash works at a store selling shoes and other sporting equipment, Rarity works at a clothing outlet, Fluttershy works at a pet store, and Twilight Sparkle works at an electronics store.

A 1950s-themed diner, referred to as the Sweet Snacks Café in merchandise,[11] is featured in Coinky-Dink World, Pinkie Pie: Snack Psychic, and Five Stars. It has four known staff members: three waitresses—Pinkie Pie, Sunny Sugarsocks, and Doo Wop—and a chef.

The Canterlot Natural History Museum is featured in the Better Together short School of Rock. Maud Pie works there as a tour guide.

Equestria Land is the premier amusement park in Canterlot. It first appears in My Little Pony Equestria Girls: Rollercoaster of Friendship. Among the named attractions mentioned include the Appleloosa Wild West Stunt Show, Nightmare Moon's Haunted Castle, Dragon Lands Drag Racing, Appleloosa Runaway Train, and the Neighagara Falls Barrel Flume. Some unnamed attractions include a rollercoaster, a kiddie coaster, a Ferris wheel, and bumper cars. The nighttime entertainment is a light parade.

Sweet & Sour is a candy store down the street from Canterlot High School featured in Twilight Sparkle's Science Fair Sparks.

The Drip is a coffee shop mentioned in chapter 6 of Twilight Sparkle's Science Fair Sparks.

Other places confirmed to be in Canterlot but have not yet been featured include Fluttershy's house, a stadium, an observatory, and a remote cottage. One of the roads leading away from the city leads to Camp Everfree.

A map of the city of Canterlot is featured on Hasbro's My Little Pony and Equestria Girls website.[4] 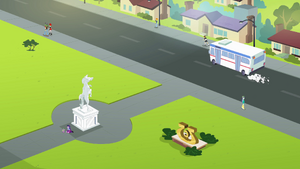