Starting with this episode, Jayson Thiessen serves as consulting director so that he can direct My Little Pony The Movie'. Jim Miller takes over Thiessen's role as supervising director. Former animation director Denny Lu makes his directorial debut in this episode. Also, Meghan McCarthy resumes her position as story editor.

"Whoa Nelly": Oh, my gosh, a sale! Do you have the Princess Dress?!
Rarity and Sassy Saddles: No! [laughing] 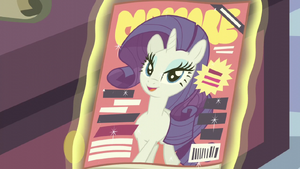