For the city the school is in, see Canterlot (EG).

Canterlot High School, also referred to as Canterlot High or CHS, is a high school located in an alternate world of Equestria. It serves as the main setting of the My Little Pony Equestria Girls franchise, chapter book adaptations, and other associated media. Principal Celestia and Vice Principal Luna are in charge of the school.

In My Little Pony Equestria Girls, Twilight Sparkle and Spike travel to the human world in pursuit of Sunset Shimmer after she steals Twilight's crown, the element of magic. Taking on the appearance of a teenage girl and dog, they enter Canterlot High and meet human versions of Fluttershy, Pinkie Pie, Applejack, Rarity, and Rainbow Dash. With their help, Twilight runs against Sunset Shimmer for Princess of the Fall Formal and gets her crown back.

Canterlot High takes on the motif of a typical high school. Facilities include a library, a cafeteria, a soccer pitch outside the school, and an auditorium. Annual school functions include the Freshman Fair, the Sun Dance, the Spring Fling, and the Fall Formal; at the latter two functions, a "Princess" among the female students is elected. Students who show particular pride in their school call themselves "Canterlot Wondercolts".

In My Little Pony Equestria Girls: Rainbow Rocks, the school holds a musical showcase called the Mane Event, in which numerous student bands and music acts compete in a "battle of the bands" in order to raise money for after-school programs. In My Little Pony Equestria Girls: Friendship Games, the school hosts the titular sporting event every four years, where the CHS Wondercolts face off against the Crystal Prep Shadowbolts.

In My Little Pony Equestria Girls: Legend of Everfree, Canterlot High's courtyard briefly appears at the end of the film. Wisps of Equestrian magic leak out of the crack where Midnight Sparkle destroyed the Wondercolts statue in the previous film.

In the half-hour special My Little Pony Equestria Girls: Dance Magic, the Equestria Girls hold a charity car wash for Camp Everfree in the school parking lot and film the Dance Magic music video in the gym. The Better Together short Queen of Clubs features multiple school clubs as Applejack and Rainbow Dash compete for most club photos taken. In the Choose Your Own Ending shorts, the school holds a production of the play "Dazzled".

In the hour-long special My Little Pony Equestria Girls: Forgotten Friendship, the Equestria Girls work together on the school yearbook, and Wallflower Blush uses the Memory Stone to erase the entire school's good memories of Sunset Shimmer, forcing Sunset to work together with Trixie to set things right.

The My Little Pony Annual 2013 comic, set some time before the first Equestria Girls film, tells how Fluttershy, Pinkie Pie, Applejack, Rarity, and Rainbow Dash first met at Canterlot High's Freshman Fair and became friends. Sunset Shimmer is also present in the story as a writer for the school paper.

In the My Little Pony: Friendship is Magic Issue #11-12, Equestria's Canterlot Academy is featured in Shining Armor and Princess Cadance's flashback, attended by Shining Armor, Cadance, and their friends. It bears a slight resemblance to the human world's Canterlot High School, and like CHS, one of its school functions is the Fall Formal.

The school is featured in the first and third stories of My Little Pony Equestria Girls: Canterlot High: March Radness. In "Detention is Magic", Sunset and her friends are in detention for supposedly playing a prank on Mrs. Harshwhinny and try to figure out who the true culprit is. In "Getting Seconds", the school holds a "Springing Into Sports" athletics competition, with Rainbow Dash intending on winning the top athlete award.

A Canterlot High playset has been displayed at the 2015 American International Toy Fair.

The front exterior of the school. It contains a statue of a horse, referred to as the Wondercolts statue, which also serves as a portal to Equestria every thirty moons. A sign consisting of two horseshoes, with the center horseshoe placed on its side to resemble the letter C, is placed just at the sidewalk. The statue is destroyed by Midnight Sparkle in Friendship Games. It appears repaired in the Summertime Short Subs Rock and again in disrepair in subsequent shorts.

The school is filled with hallways, each lined with green lockers for students to store books and other items. At least one hallway has a vending machine filled with assorted snacks, fruits, and beverages.

There are a number of classrooms in the school, one of which is used by Miss Cheerilee. Only four are shown, the first briefly seen through the window of its door, the second shown entirely during Rarity's introduction, Pinkie is seen taking a cooking class taught by lunch lady Granny Smith in Pinkie on the One, and Cranky Doodle is seen teaching a class during Dean Cadence's announcement of the commencement of the Friendship Games in Friendship Games.

The office used by Principal Celestia. It features a desk, two bookcases, a calendar, and a gallery featuring the Princesses of past Fall Formals (and possibly other dances). A reception area is just outside the office's door. A symbol above the door depicts the moon.

The cafeteria is where students have their lunch each day. It is one of the largest areas in the school, containing a large number of tables to seat groups of students. The walls are lined with flags bearing the logo of the Wondercolts, the school's logo, and the sports played by the sports teams. Granny Smith serves as the lunch lady.

A large hall where the school holds its gym classes and school functions. It features a stage, at least two double-door entrances, large windows similar to the ones in the Canterlot Castle ballroom, a large floor suitable for playing sports, and a supply closet for storing sports equipment and cleaning supplies. It is located at either the right or left hand of the school, judging by exterior shots.

An extensive library that spans at least two stories. The roof here is a glass ceiling, allowing for natural lighting. Shelves are arranged in circles along the library's walls, and in the center of the first floor is a computer area for student use. Similar to Ponyville's Golden Oak Library, it features the statue of a pony's head on the table in the middle. It also echoes with how Golden Oak Library has its shelving hollowed out around the inner circumference of the tree. It appears to stay open for some time after school hours. Miss Cheerilee serves as its librarian, or one of its librarians.

Located outside of the building. It has two goal posts and bleachers. It is converted into the field for the Tri-Cross Relay in Friendship Games.

The office used by Vice Principal Luna. It appears to be larger than Principal Celestia's office. It features a desk, a bookcase, a set of drawers, a chalk notice board, and a painting of the night sky. Almost everything in the office has a depiction of the crescent moon on it.

The band room is used by the main five in the shorts Pinkie on the One and Player Piano. It makes an appearance in Rainbow Rocks and Friendship Games. The walls are decorated with music symbols such as treble clefs and staffs with notes on them. It contains some shelves with sheet music on it, a drum kit in the center of the room, an electric keyboard plugged into a wall, and shelves holding various musical instruments, including a saxophone, some percussion instruments such as a tambourine and a pair of maracas, as well as an acoustic guitar handing from a wall hanger and a triangle hanging from the ceiling, in addition to some instruments on the floor such as a conga drum and a xylophone.

Mentioned by Sunset Shimmer when she gives a tour of the school to the Dazzlings.

Mentioned by Sunset Shimmer when she gives a tour of the school to the Dazzlings. It is first seen in the Friendship Games animated short The Science of Magic.

Featured in the half-hour special Dance Magic and the Summertime Short Get the Show on the Road. According to Vice Principal Luna in My Little Pony Equestria Girls: Forgotten Friendship, it is limited to school faculty use only.

Featured in the Summertime Short The Art of Friendship.

An unspecified classroom serves as the headquarters for the CHS yearbook club in Forgotten Friendship.

Mentioned on a flyer in The Fall of Sunset Shimmer. Megan, Danny, and Molly work on the school yearbook in this room. 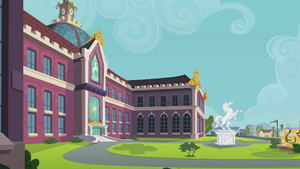