North Point has a light blue coat, pink and gray mane and tail, deep orchid eyes, and a cutie mark of a drawing compass.

Citrus Blush has a yellow coat, two-tone orange mane and tail, cerise eyes, and a cutie mark of a compact mirror.

Cayenne, North Point, and Citrus Blush first appear in Canterlot Boutique as patrons of Canterlot Carousel. After the first part of the song Rules of Rarity, Cayenne appears at Canterlot Carousel to get her Princess Dress. When she sees that Rarity made alterations to the dress without Cayenne's approval, Cayenne states that while Rarity's changes are "fine", it's not what she ordered, and she demands a Princess Dress exactly identical to the one worn by Princess Twilight Sparkle.

Near the end of the episode, Cayenne, North Point, and Citrus Blush appear at Canterlot Carousel's going-out-of-business sale. North Point expresses interest in "In-spire-ation", a dress in Rarity's "Royal Regalia" collection inspired by Canterlot's tower spires, and Citrus Blush is taken with "Fountain of Truth", a dress inspired by the fountain in the Canterlot Castle garden.

Cayenne and Citrus Blush appear in Spice Up Your Life with brief lines of dialogue. Cayenne also appears in an establishing shot of Las Pegasus at the beginning of Viva Las Pegasus.

In The Beginning of the End - Part 2, Cayenne and Citrus Blush appear as King Sombra's mind-controlled slaves fighting the Mane Six at the gates of Canterlot. In The Point of No Return, Cayenne appears walking past the Canterlot Library and notices Twilight hiding in a nearby bush before backing away in awkwardness. North Point later makes a background appearance talking to an unnamed pony behind Dusty Pages' old home. In Common Ground, Cayenne appears as the unicorn player for a buckball game against Ponyville during a tournament in Appleloosa. In 2, 4, 6, Greaaat, Citrus Blush attends the Buckball game between the School of Friendship and Princess Celestia's School of Magic and watches the halftime cheerleading routine. She then leaves the stadium after the game ends. In The Summer Sun Setback, Cayenne appears as a member of the Flaming Sky Firework Unicorn Troupe preparing for the final Summer Sun Celebration in Canterlot. Crackle Cosette convinces the troupe of Unicorn superiority and that fireworks shows are a waste of their talent, causing them to quit. Twilight and Rarity convince the troupe to put on the fireworks show, and they perform successfully during the ceremony. In The Ending of the End - Part 1, Cayenne makes a cameo appearance walking through the Canterlot Castle courtyard during preparations for Twilight Sparkle's coronation as ruler of Equestria.

In Gameloft's mobile game, Cayenne, North Point, and Citrus Blush are available as playable characters; they are referred to simply as "Posh Unicorn", "Architecture Unicorn", and "Fashionable Unicorn" respectively. Together with Bright Unicorn and Goth Unicorn, they are collectively referred to as the "Canterlot Trendsetters".

In the High Magic expansion set of Enterplay's collectible card game, Citrus Blush is depicted on the front of token card #T2.

"Cayenne": Princess Dress! Finally! I've been simply desperate to get this ever since I saw Princess Twilight wearing it on your— ...Wait a minute. There's something different.

"Cayenne": I want the dress to be exactly like the one Princess Twilight wore. Understand?

"North Point": Do you still have this In-spire-ation dress that's in the new issue of Cosmare?

"North Point": Bats in the belfry! I have to try it on!

"Citrus Blush": This gown is quite beautiful, but it totally clashes with my complexion.

"Citrus Blush": It's exactly what I've been dreaming of!

"Citrus Blush": How many hooves does it have?

"Cayenne": Well, when it gets rated, let us know. 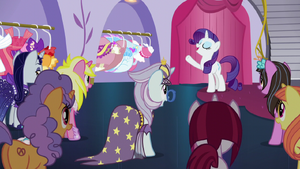