For the mare and filly whose names include "Caramel", see Caramel Apple and List of ponies#Candy Caramel Tooth.

Caramel is a background male Earth pony in My Little Pony Friendship is Magic. He has a light brown coat with a darker brown mane. He shares his mane and tail style and his color scheme with Doctor Horse, and shares his design with Cherry Fizzy, Royal Riff, and S01E02 Unnamed Earth Stallion #1. He is called Chance-A-Lot in some merchandise.

Caramel is a forgetful pony, managing to lose his grass seeds for Winter Wrap Up more than once according to Big McIntosh. His goof frustrates Applejack and only adds to the backlog of work to get through during the Wrap Up. For a few seconds during this appearance he has caramel apples as his cutie mark, but for the rest of the scene and for most other appearances he has three blue horseshoes.

He is one of two ponies in The Best Night Ever who pull the six leading characters' carriage to the Grand Galloping Gala, the other being Lucky Clover. He is happy to pull the carriage for Rarity, but when Spike whips him with the strap, he shows a great deal of annoyance, shared by Lucky Clover. At this point, he also mentions that he is Rarity's neighbor.

In The Super Speedy Cider Squeezy 6000, he is among the ponies near the front of the line when the Apple family runs out of cider, and echoes Rainbow Dash's displeasure with their frequent shortages.

In Hearts and Hooves Day, Caramel is considered a suitable candidate for Cheerilee's date by Sweetie Belle until the "camera" pans to the left and reveals him rubbing noses with Sassaflash. This causes Scootaloo to sarcastically remark that "his girlfriend sure thinks" he's acceptable. Then later, while the Cutie Mark Crusaders near the end of their song and pan out the camera, he can be seen rubbing noses with Golden Harvest. Later, there is a stallion with Golden Harvest that is similar to Caramel, sharing the same mane style, tail style, and cutie mark.

In A Canterlot Wedding - Part 2, Caramel serves as one of Shining Armor's aides-de-camp at his wedding to Princess Cadance.

In season four, Caramel appears in Flight to the Finish, Pinkie Pride, Simple Ways, Filli Vanilli, For Whom the Sweetie Belle Toils, Leap of Faith, Trade Ya!, Equestria Games, and Twilight's Kingdom - Part 2.

In season five, Caramel enjoys wintertime with Daisy and Cherry Berry in Tanks for the Memories, performs as a rodeo clown in Appleoosa's Most Wanted, appears as a delegate for the Grand Equestria Pony Summit in Princess Spike, attends the friendship party for the Yaks in Party Pooped, appears in Ponyville's shared dream in Do Princesses Dream of Magic Sheep?, watches the Wonderbolts practice in Rarity Investigates!, looks at "Orchard Blossom" among the other contestants upon declaring themselves and Apple Bloom approved as a pair, walks through Ponyville during Light of Your Cutie Mark in Crusaders of the Lost Mark, in both Hearthbreakers and Scare Master, he appears decorating Ponyville for the respective holidays, and appears walking through Ponyville in What About Discord?

In season six, Caramel has a brief speaking role in Applejack's "Day" Off.

Caramel is one of many ponies seen in the establishing shot of Ponyville in My Little Pony Equestria Girls: Rainbow Rocks.

A human Chance-A-Lot makes named appearances in two chapters of the My Little Pony Equestria Girls screenplay novelization My Little Pony: Equestria Girls: Through the Mirror. In chapter 11, "The Tails of Twilight Sparkle", the story's narration states that he is the quarterback of the football team at Canterlot High, and in chapter 14, "A Chance for the Dance", he has two spoken lines. An athlete in the film is similar, but a DHX layout artist has stated that the students in the film "were not based off of background pony designs."[5]

In Gameloft's mobile game, two versions of him are characters, similarly to Jeff Letrotski / Richard (the) Hoovenheart, Daring Do / A. K. Yearling, and DJ Pon-3.

The version of him present since early previews is called Caramel, uses the same appearance as in most appearances, and has the description "Caramel is a sweet but forgetful pony who tends to lose things, like his grass seeds!" The game is the first time that the pony with the cutie mark of three blue horseshoes is explicitly identified as Caramel.[6]

The version of him present since respective February 17, 2016 and March 1, 2016 updates to the iOS and Android versions of the game is called "Dancing Clownspony", uses the same appearance as in The Last Roundup and Appleoosa's Most Wanted, and has the description "Dancing Clownspony loves dancing and prancing and moving with glee, but what he loves most is performing for you and me!"

Caramel appears in episodes 3, All About Alicorns, and 8, Land of Harmony.

Caramel appears on WeLoveFine's fan-designed art print "Apple Family Portrait".[8][9] The artist of the print thought that Caramel is an Apple family member.[10][11][12]

Caramel appears in the My Little Pony First Look and Find book.

Enterplay collectible card game Absolute Discord expansion set card #20 C of Caramel lists his name with a trademark symbol and attributes to Applejack the quote, "He's the kind of pony who'll put in ten hours on the farm and still have a smile on his face at sunset."

"Excuse me?"
— The Best Night Ever

"You always say that!"
— The Super Speedy Cider Squeezy 6000

"Plus we can have high quality Apple family cider!"
— The Super Speedy Cider Squeezy 6000

"Are Pinkie Pie and Applejack related or what?!"
— Fame and Misfortune

Equestria Girls: Through the Mirror

Chance-A-Lot: We came to see if you guys wanted any help.
Chance-A-Lot: If we're gonna have the dance tonight, we thought you might need it! 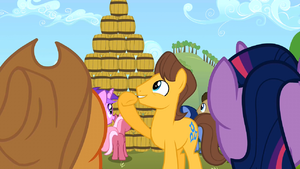