Caramel Apple is a female Earth pony in the Apple family. She has a pale yellow coat, orange mane and tail, bright green eyes, and a cutie mark of three caramel apples.

Caramel Apple has appeared in only one episode in each of the first four seasons.

She first appears in Friendship is Magic, part 1 when Applejack introduces Twilight Sparkle and Spike to her during the Apple family reunion. She appears next in The Last Roundup, at the Ponyville train station when Applejack returns home from Dodge Junction.

In My Little Pony Equestria Girls: Rollercoaster of Friendship, Applejack clarifies to Micro Chips that she isn't Caramel Apple.

Caramel Apple appears in My Little Pony The Movie in Canterlot during the Friendship Festival.

In My Little Pony/Transformers Issue #2, Caramel Apple appears in the audience of Pinkie Pie's baking show. In Issue #4, Caramel Apple is summoned to Sweet Apple Acres by Discord to help Applejack drive the Insecticons off the farm.

Caramel Apple is a playable character in Gameloft's mobile game. Her in-game description states, "Caramel Apple's the sweetest Apple of them all, and she loves nothing more than inviting her friends over for movie nights and pony-oke singalongs!"

Caramel Apple is depicted with the same design as Pinkie Pie in the seventh wave of mystery pack toys and collector cards, the English-only version of which lists her name with a trademark symbol and states that she "loves to watch movies with her friends!" and the English/French/German/Spanish/Portuguese/Italian/Dutch/Swedish/Danish/Greek/Polish/Turkish/Russian version of which states that she "loves watching movies!" 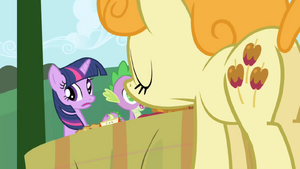