My Little Pony Friendship is Magic: Castle Creator is an online promotional Flash game where the player can select and position a variety of characters, backgrounds, and set pieces to create an image. There are several different versions of the game, some of which have different titles.

Gameplay consists of selecting a number of different images from the show and manipulating their size and location to the player's liking. This includes characters, food, props, common objects and locations. You can use every main character and princesses Celestia and Luna in a few variations of their costumes and gestures.

Castle Creator includes all of the above backgrounds and characters, with the addition of:

Castle Creator is missing one object, a purple frying pan with two eggs, but it has twenty-two additional Nightmare Night objects, for a total of sixty-two. 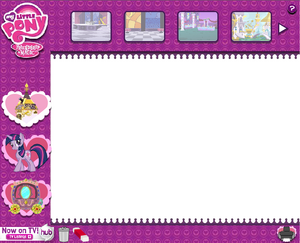