Castle Mane-ia (titled as Castle-Mania by some sources) is the third episode of the fourth season of My Little Pony Friendship is Magic and the sixty-eighth episode overall. In this episode, a mysterious presence follows Twilight Sparkle and her friends in Princess Celestia and Princess Luna's old castle. The title of the episode is an allusion to Castlevania, a Konami series of video games.[2]

Writer Josh Haber's inspiration for this episode, idea, and story was Scooby-Doo.[3]

The episode was leaked on the Internet on 26 and 27 November 2013, extracted from the website code of the Hub Network's website Hubworld.com. These leaked copies were semi-standard definition, at 360p. This was not the first episode of My Little Pony Friendship is Magic to be leaked days ahead of its official airing, the previous ones being season two's seventeenth episode Hearts and Hooves Day and season three's seventh episode Wonderbolts Academy.

In Golden Oak Library, Twilight Sparkle unsuccessfully tries to find information on the Tree of Harmony's locked chest, previously seen in Princess Twilight Sparkle - Part 2. Princess Celestia writes to Twilight, suggesting that she should go to the Everfree Forest and look for a book in the library in the royal sisters' old castle.

In the dilapidated castle, Twilight and Spike find the large library of ancient books. Twilight is ecstatic to have found such a large source of untapped research material, but Spike trembles in fear as star spiders crawl around him.

The friends head to the castle

At Sweet Apple Acres, Rainbow Dash and Applejack are locked in a competition of bravery while Pinkie Pie keeps score. They have a staring match while being covered in bees, but it is cut short when a beekeeper pony calls back the bees. Pinkie declares that Applejack and Rainbow Dash are tied for bravest pony and leaves to test the new Ponyville Schoolhouse bell. Applejack decides that they can have a re-match in the Everfree Forest.

Rarity leads Fluttershy and Angel through the forest on a quest to find ancient tapestries in the old castle. Fluttershy is nervous about being in the forest so late in the day, mentioning that it is star spider season. Rarity says that she enlisted Fluttershy's help to bring some of the tapestries back to Carousel Boutique for restoration and possibly inspiration for a new fashion line. They enter the castle. A large unseen figure looms above the castle steps.

As Rarity marvels at the foyer's decor, Fluttershy warns Angel of the castle's dangers. The three enter the next chamber just as Twilight and Spike enter from an opposite corridor with a lit candelabra. Twilight intends to stay well into the night researching. As they exit the foyer, Applejack and Rainbow Dash arrive. Applejack says she brought them there because of a legend Granny Smith told her when she was a filly. When Nightmare Moon was banished to the moon, not all of her dark magic went with her, and whenever night falls on the castle, that magic would take the form of a being called the Pony of Shadows. Rainbow Dash is skeptical of the myth.

Rarity and Fluttershy find a worn tapestry of Princess Luna. Fluttershy flies under the tapestry to take it off the wall, but activates a hidden mechanism that rotates the wall. On the other side of the wall, Applejack and Rainbow Dash see the tapestry moving and hear Fluttershy struggling under it. They run away, screaming in terror when a figure casts a shadow on them. The wall turns back around, and Fluttershy pops out from behind the tapestry with a sprained wing. Realizing that the tapestry is too heavy to take off the wall, they resolve to find a smaller one. Rarity mentions the rotating wall to Fluttershy and concludes that the castle must have an abundance of secret doors and traps. They suddenly fall through a pit when Angel steps on a pressure plate. Angel nervously hops away afterwards.

Applejack and Rainbow Dash gallop madly through castle corridors, starting to believe that the Pony of Shadows might be real. They decide that whoever stays in the castle the longest wins. Neither notice an eye in a painting on the wall watching after them.

Back in the library, Twilight and Spike have yet to find anything. Angel's sudden appearance startles Spike, who leans back in his chair. The chair's hidden mechanism opens a reading chamber behind a bookshelf. Inside the chamber, Twilight discovers Celestia and Luna's diary.

The Organ to the Outside

Applejack and Rainbow Dash walk down a spiral staircase and find a hallway lined with torch wall-mounts shaped like pony legs.

Under the trap door they fell through, Rarity and Fluttershy end up in a small, dark hollow with nothing but a small hole in the wall. Rarity reaches her hoof through the hole, just as Rainbow Dash feels someone put her hoof around her. She thinks it's Applejack, but Applejack is standing several feet away. The wiggling hoof in the wall scares Applejack and Rainbow into fleeing, and Rarity panics over feeling something alive. Thinking it's Angel, Fluttershy reaches through the hole and pulls on one of the torch wall-mounts, causing the wall to spin around and free them. Rarity has reached her wit's end, and Fluttershy is still worried about Angel.

As Angel helps himself to a bowl of carrots, Twilight reads about Celestia and Luna's favorite castle traps in their diary, including the "Hall of Hooves" and the "Organ to the Outside". In a chamber far beneath her and Spike, a cloaked figure plays a pipe organ as Applejack and Rainbow Dash race past. Spike hears the organ playing faintly, but Twilight is too engrossed in her reading.

Fluttershy looks for Angel when Rarity finds a pair of sun and moon-themed tapestries in the throne room. Meanwhile, Applejack and Rainbow Dash wander into a hallway lined with suits of armor.

The cloaked figure continues playing the Organ to the Outside. Each note sets off a trap somewhere in the castle. One note separates Applejack and Rainbow Dash. Another causes Rarity to disappear behind Princess Luna's throne, leaving Fluttershy alone. As the cloaked figure plays another note, another bowl of carrots appear in front of Angel. The ponies' frightened screams and the organ's ominous tones fill the castle as Twilight is still too distracted to hear the screams.

The Pony of Shadows

Rarity, Fluttershy, Applejack, and Rainbow Dash meander into the foyer, erupting into screams and sobs when they bump into each other. Twilight finally hears their screams, and she and Spike go to investigate. She finds her friends in hysterics and calms them down. Twilight leads them to the organ room where the cloaked figure is playing the organ. Twilight cautiously approaches and pulls the figure's cloak off, revealing it to be Pinkie.

When asked about her bell ringing duties, Pinkie says she rang the school bell for five minutes by standing inside the bell and banging her head against it, after which she was told that was "good enough". She went to the Everfree Forest to gather bluebells for a "finish ringing the school bell" party, but felt chilly and had to wrap herself in the tarp she had meant to carry the bluebells in. She then caught sight of Fluttershy and Rarity going into the castle and followed them, because she thought they were heading to an "everypony come to the scary old castle and hide from each other while I play the organ" party.

Back in the secret reading chamber in the library, Twilight explains to her friends that reading the princesses' diary helped ease her fears.

"Knowing something about the past made it easier to deal with my problems in the present, even the scary ones."
— Twilight Sparkle

Twilight suggests that she and her friends keep a collective journal so they can learn from each other and ponies who read it in the future might learn from them.

As Spike dismisses the idea of shadow ponies, a dark figure casts its shadow on the bookshelves in the next room and bares its glowing yellow eyes.

Pinkie Pie: This is the most daring dare anypony ever dared dare another pony to dare!
Rainbow Dash and Applejack: Huh?
Pinkie Pie: It's exciting!

Applejack: When I was just a filly, Granny Smith told me of an ancient legend. When Nightmare Moon was banished, not every last bit of her dark magic went with her. Granny used to say, when night falls on the castle, that magic takes the form of... the Pony of Shadows!
Rainbow Dash: You mean, like a ghost?
Applejack: [spookily] Nopony knows!

Fluttershy: But we can't leave now, not with Angel lost somewhere in this dangerous old castle! He could be trapped under a crumbling statue, or stuck high in a tower without food or water or any friends at all!

Applejack: Do you think there's a single room in this castle that isn't filled with terrifying things?

Rarity: Of all the castles in Equestria, this is by far the most ungrateful!

Pinkie Pie: Hey, you guys! Did you know I can totally play the organ? Because I didn't! 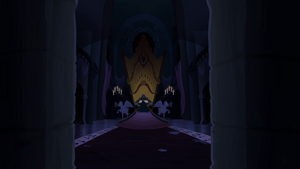