Looking for a book

Sure, Spike. Wearing an apron looks very manly these days.

Well, that's the end of that feather duster.

So many books! Not one answer!

Twilight doing what she does best.

Twilight Sparkle can fly and do magic at the same time.

"Check out my old digs, you know the ruin in the Everfree Forest!"

It's still spooky, though.

I'd turn back if I were you.

Atrium of the castle.

Soaring to see the books!

So many lovely, lovely books!

She just finds it all so predictable!

Neither shall give way!

"Is this a hold up?" "No, sir! This is a scientific experiment!"

They're trying for "most daring", you see.

Don't try this at home! They're what you call, "experts".

"I'm gonna need my bees back."

Is this the face of a mare you would trust to figure the odds?

Like all before them, Rainbow and AJ have been defeated by Pinkie-ness.

Well, that was a waste of a morning that could have been spent napping!

Bring it on.
Add a photo to this gallery

A glamorous lady is trotting through the forest like she owns it.

It must be Take Your Pet Psychopath To Work Day

The old castle in the Everfree Forest.

Rarity is at the start of crossing the bridge.

I just need to find the right one.

Besides, what's so important that you need my help with?

It's not stealing if you return it, right?

Well, are you coming?

Though, it is going to be hard finding some ancient pieces to fix.

Ah, what was that?

This is where the Elements of Harmony used to be.

Who knows that it's star-spider season? It's creepy.

Ah, and all this mud is simply too dirty.

Angel runs into the castle.

Rarity, like a lady takes her time into the castle.

There's a shadow touching the steps.
Add a photo to this gallery

Rarity and Fluttershy inside the castle.

Fluttershy is always concerned of her Angel.

Twilight must've known this was airing during Chanuka. ;)

Applejack telling Rainbow her past.

"When I was just a filly, Granny Smith told me an ancient legend. When Nightmare Moon was banished..."

"...not every last bit of dark magic went with her. According to Granny, myth says that whenever night falls on the castle..."

"Look Before You Sleep" anyone?

Because the castle is deserted, tapestries get a little torn.

It needs a little fixing.

We don't have much time for this.

Shadow on Applejack and Dashie.

She's there, the Pony of Shadows!

Like I said before, so much for not being afraid of anything, Rainbow Dash!

Flutters pop out from behind tapestry.

What do you know, Angel Bunny actually does have a soul.

Fluttershy, this is just Celestia and Luna's old castle and its from when we saved Luna from her curse and met her.

Besides, you don't believe ghosts do you?

I thought so, now come on i need to find a tapestry that needs to be fixed.

Angel standing on a pressure plate.

The journal / The Hall of Hooves

Twilight has noticed that all the places she visits tend to have this atmosphere.

"—ANGEL! What are YOU doing here?"

Obligatory secret door behind a bookcase.

Looks immaculate, but the curtain's a little torn.

Sombra must have hired the same interior designer for his dark spiral staircase.

Will the owner of a white mare please turn their eyes off?

Unicorns are handy to have with you in dark places.

You don't need to put your hoof around me.

Oh no! It got Rainbow!

I felt something... ALIVE!!

Well at least they're out

Flutters and Rarity in the Hall of Disembodied Pony Legs.

Oh look. How adorable.
Add a photo to this gallery

This journal has pictures that have been drawn.

There is a torch with a holding hoof, a unicorn's armor set...

The Pony of Shadows is there inside my mind...

Flutters catches up with Rarity.

Look at these thrones. It looks like no one's sat in them in years.

Just look at that old tapestry! Is it beautiful or what?

Erik is that you?

This organ has way too many black keys.

Applejack leaning against a wall.

Hassle in the castle

"…Prepare to be restored!"

"Hello, is anyone there? Rarity?"

"Of all the castles in Equestria…"

"…This is by far the most ungrateful!"

All together now, one, two, three….."AYIEEEEEEEEEEEEE!!!!"

"I was only trying to restore ancient a-ha-ha-hart!"

Ding, dong, the witch is dead!

"What's gotten into them?"

This is what happens when I leave you guys alone.

Do you even lift?

Why does this castle hate me?

Twilight casts 'Mass Hold Pony'. Because she's high-level like that.

"Fluttershy? What are you doing here?"

"Have you all spent the whole night running around scaring each other?"

"That depends…on whether or not you're the Pony of Shadows!"

You can shudder in fright behind me.
Add a photo to this gallery

The Pony of Shadows

Don't worry, everypony. Everything is gonna be OK.

Now Twilight, don't you go believing on us!

It's the Pony of Shadows.

Who else but Pinkie?!

Hey guys! Turns out I can totally play the organ! I knew using SAN as a dump stat would pay off!

How did you even get in here!?

But I thought you had to ring the school bell all week.

Ever tried to ring a large bell with your head?

Pinkie Bell. (Well, we always knew she was a little ding-y.)

Double Eye Roll: for when a Double Facehoof is just too much effort.

Can you play "Vampire Killer"?

I'll have this tapestry fixed in no time.

"I always let my imagination run away from me…"

"You certainly did that."

"Why weren't you scared?"

"Why don't we keep a journal, just like the royal pony sisters?"

"That way we can learn from each other! And maybe some day, other ponies will read it and learn something, too!"

"What a splendid idea!"

"You're still tied for Most Daring Pony!"

"Sigh" Not this again.

What's that? Luna? Is that you?
Add a photo to this gallery 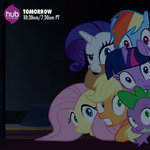 Add a photo to this gallery
Retrieved from "https://mlp.fandom.com/wiki/Castle_Mane-ia/Gallery?oldid=2194373"
Community content is available under CC-BY-SA unless otherwise noted.