Castle Sweet Castle is the third episode of the fifth season of My Little Pony Friendship is Magic and the ninety-fourth episode overall. The title is a play on the phrase "Home sweet home."

After finding out Princess Twilight's been avoiding her castle, her friends try to make it feel more like home.

The episode was initially teased by the show staff at the 2014 San Diego Comic-Con.[1]

On March 3–5, 2015, an unofficial My Little Pony: Friendship Is Magic[sic] season 5 episode listing on IMDb titling the third episode as "Library Blues" was discredited by Jim Miller.[2][3][4][5]

The Daring Do posters were designed by Kora Kosicka.[6] The chandelier was designed by Rebecca Dart,[7] with assistance from background designer Phil Caesar.[8] The pancakes were made by character and prop designer Charmaine Verhagen.[9]

This is the first episode to mention the name of the Golden Oak Library, previously called that and other names in a wide variety of materials years earlier.

At Fluttershy's cottage, Twilight Sparkle helps her friend bathe her animals. Covered in mud from their hard work, Fluttershy sends Twilight on her way to take her own bath at her castle. Twilight quickly asks if any other animals need cleaning, but Fluttershy says no. She suddenly pushes Angel into the mud, making herself an excuse to stay and give him another bath.

Twilight ends up spending hours at Fluttershy's cottage cleaning Angel. Fluttershy wants to rest up for their pancake breakfast the next day and says Twilight needs to get the castle ready. Twilight insists that the castle is fine and flies off to help Pinkie Pie with the pancakes.

The next day, the Mane Six have a pancake breakfast together in the dining hall of Twilight's castle. However, a messy-looking Twilight sleeps through the meal, having spent the whole previous evening preparing pancakes with Pinkie Pie. The other ponies have also taken notice of Twilight's recent odd behavior: helping Applejack dig more tree plots than necessary at Sweet Apple Acres; spending an entire afternoon helping Rarity organize a single gem drawer at Carousel Boutique; and racing Rainbow Dash over and over, no matter how many times she'd lost.

When Twilight wakes up from her sleep, her friends ask her what's going on. Twilight explains that she's been avoiding her castle because it's too big, cold, and empty for her to feel like home. Rarity suggests redecorating and even proposes that her friends will do it for her while she spends a relaxing day at the Ponyville Day Spa. Spike enters, having woken up late for the pancake breakfast, and agrees to take Twilight to the spa.

The rest of the Mane Six spend the afternoon decorating Twilight's castle in various ways, to the tune of a lighthearted song.

Applejack decorates with crates of apples, hay bales, and flower gardens. Fluttershy introduces a variety of animals to keep Twilight company. Pinkie Pie puts up balloons and hides several party cannons in the castle interior, Rainbow Dash puts up Wonderbolts memorabilia and Daring Do posters, and Rarity puts up curtains and banners embedded with gemstones.

By the time the ponies finish decorating, the throne room alone is a cluttered "mishmash of knickknacks." Spike briefly returns and immediately recognizes the remodeling as a complete mess. With Twilight still having her spa day, Rarity tells Spike to stall for time and keep her away from the castle until sundown.

Spike returns to Twilight at the spa. Before Twilight can leave to go back to the castle, Spike stalls by suggesting massages. While Twilight has a normal massage, Spike inadvertently accepts a much firmer massage from Bulk Biceps. Back at the castle, Twilight's friends begin to argue about which decorations to remove.

After Twilight and Spike's massages, Spike suggests that they take the scenic route back to the castle. They pass by the blackened remains of the Golden Oak Library and fondly think back on the memories they made while living there. To cheer Spike up, Twilight asks if he wants to add anything to the castle to make it feel more like his home too. Spike thinks of another way to stall for time and says he wants a new bed.

Meanwhile, as Twilight's friends continue removing the throne room's clutter, they end up returning it back to the way it was before they started. With sunset quickly approaching, the ponies struggle to think of another way to make the castle feel like a home. They realize that they had been decorating as they would their own homes instead of Twilight's home. As they ponder on what Twilight loved about living at the library, Applejack gets an idea.

In Davenport's Quills and Sofas store, Spike browses for a new bed, and Twilight begins to lose patience. Meanwhile, as they sing a reprise of their earlier song, Applejack and Fluttershy dig up the ground around the library while Rarity, Pinkie, and Rainbow buy decorative gems, eventually hanging something up in the castle throne room.

Some time later, Twilight and Spike finally return to the castle where the other ponies greet them. At first it appears that Twilight's friends have made no changes to the castle, but Applejack says what truly makes home feel like home isn't what it looks like but the memories you make there.

With that in mind, the ponies made a chandelier out of the library's roots, decorated it with gems, and hung it in the throne room. Each gem on the chandelier depicts a memorable moment of Twilight's life in Ponyville. Twilight is moved to tears by the gesture and ready to make new memories in the castle. The Mane Six and Spike celebrate with a lavish cake Pinkie Pie made and share it in the newly refurnished dining hall, where Twilight's friends admit to still adding a little flair of their own to other rooms in the castle, much to everyone's amusement.

Twilight Sparkle: I've been... the thing is... I know it's silly, but I... I've been avoiding... this place.
Rarity: [gasps] Why in Equestria would you want to avoid such a gorgeous castle?
Pinkie Pie: Yeah, this place has everything! Big tall ceilings that make you feel tiny! Shiny new floors that are cold to the touch! Brrr! And it even has loooong empty hallways!
["hallways" echoes out]
Pinkie Pie: Okay, I get it.

Rainbow Dash: [unconvincingly] Fluttershy, I love that you brought so many animals.
Fluttershy: Are these your trophies?
Rainbow Dash: I prefer to think of them as everypony's trophies but with my name permanently etched onto them.
Rarity: [unconvincingly] [laughs] My my, Applejack, bringing the outdoors inside, it's... earthy... What a lovely touch! [sniffs, heaves] Are these cloaks vintage?
Applejack: Nope, just old! Unlike your sparkly window doohickeys which are... why, they're just swell! [laughs nervously]
Pinkie Pie: No one said anything about my hidden confetti cannons! [squee] Oh, right! They're hidden! [giggles]

Spike: Hey guys, how do my claws look—Sweet Celestia!

Aloe: Did somepony order massages?
[crash]
Bulk Biceps: Yeah! Let's do this, little dragon!
[crash]
Aloe: Oh, I hate it when he does that.

Rarity: There! Now nothing is cluttering the castle!
Rainbow Dash: You're right. There is literally nothing cluttering this castle.

Applejack: She said it herself – if anypony should be able to make her feel comfortable in her new home, it's us. If we can't do it...
Fluttershy: Then Twilight will be stuck living in a castle that makes her feel... sad!
["sad" echoes out]
Pinkie Pie: Wow, Fluttershy! I didn't know you could be loud enough to echo!

Applejack: Come on, y'all. We just need to think about Twilight. What was it she'd loved about livin' in the Golden Oak Library?
Fluttershy: Oh, everything! The books, the smell of books, the joy she felt from organizing books...
Rainbow Dash: Remember that time I crashed into all those books attempting my sonic rainboom after you guys just cleaned up? [laughs, sighs] That was good times.
Applejack: Yeah, for you, maybe.
Rarity: Oh, and Applejack, remember when we were stuck having a sleepover there? That turned out to be so much fun!
Pinkie Pie: Remember the time it got blown up to smithereens?! Wait, no, that was the worst.

Applejack: What really makes home feel like home isn't what it looks like. It's the memories you make when you're there.
Rarity: So we've made something that celebrates the memories we've made with you since you moved to Ponyville. 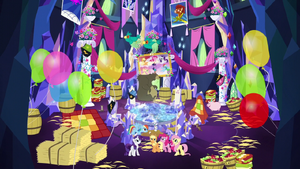