My Little Pony Friendship is Magic Wiki
Register
Don't have an account?
Sign In
Advertisement
in: Locations, Trees
English

In a September 2013 presentation held by Hasbro Australia, a slideshow was shown depicting upcoming My Little Pony and Equestria Girls merchandise. One of the slides in the slideshow relating to Rainbow Power contains the text "QUEST FOR A KINGDOM".[1]

Twilight's new home was designed by background designer Phil Caesar in conjunction with art director Ridd Sorensen and BG painter Geoff Manson.[2] In May 2014, Jim Miller was asked regarding Twilight's new home "Any rooms we are yet to see? :) Involving a certain familiar-looking wooden library maybe?" and answered "You'll have to wait to find out!"[3] Later in the same month, Miller was asked "So is there an official name for Twilight's new crystal-tree-house castle-thing?" and answered "You'll have to wait till season 5 to find out!"[4] In late November 2015, Miller confirmed the castle's name.[5]

In the chapter book My Little Pony: Twilight Sparkle and the Crystal Heart Spell, Twilight has her doubts about "being in charge of the well-being of a kingdom of ponies" and seeks out advice from others. She consults Princess Cadance and asks her friends for ideas for her "future kingdom".

At the beginning of My Little Pony Equestria Girls and its chapter book adaptation My Little Pony: Equestria Girls: Through the Mirror, Twilight worries that, now that she's a princess, Princess Celestia will expect her to lead a kingdom of her own, a possibility that Spike gets excited about.

On pages 12 and 13 of the My Little Pony: Friendship is Magic Issue #17 story Reflections Part 1, Twilight worries that her responsibilities of being a princess will interfere with her magical studies. Rainbow Dash suggests she be "a magical wonder of the world and a princess with the responsibilities of an entire kingdom on her shoulders", noting that it "can't be that hard".

At the climax of the episode Twilight's Kingdom - Part 2, the crystalline tree-castle is created from the mysterious chest that sprouted at the base of the Tree of Harmony in Princess Twilight Sparkle - Part 2. The chest is launched from the tree to a site on one side of Ponyville where, in a matter of seconds, the tree grows into its full size.

The tree-castle bears some resemblance to the Golden Oak Library, at least the aboveground portion of which is destroyed earlier in the episode by Lord Tirek, but is many times larger and appears to have a multi-level castle in its branches, which includes a great balcony, two spires, and a tower. The structure has at least one banner flying on the side marked with Twilight Sparkle's cutie mark, and the top bears a large crystal star. Two sets of five strings of beads hang off the side of the structure much like the white beads that hang off the Tree of Harmony. At the foot is a great golden stair for the two-leaved golden door into the tree's body. Two open lancet windows flank the door.

Beginning with the season premiere, the castle takes the Golden Oak Library's place in the theme song.

In The Cutie Map - Part 1, the castle reacts to the Mane Six's cutie marks, and a crystal platform rises from the center of the throne room and creates a three-dimensional interactive map of Equestria. The map calls the Mane Six to a remote village to solve a friendship problem.

In Castle Sweet Castle, the castle is shown to contain high-rising ceilings, long hallways, and a dining hall that Twilight and her friends hold a pancake breakfast in. To make the castle feel more like a home to Twilight, her friends fashion a gem-lined chandelier from the Golden Oak Library's roots and hang it in the throne room. In addition, Rarity decorates the dining hall, Applejack spruces up the kitchen with "rustic farm decor," Rainbow Dash puts up Daring Do posters in the library, Fluttershy places some stuffed animals in Twilight's bedroom, and Pinkie Pie installs a number of hidden confetti cannons.

In Tanks for the Memories and Make New Friends but Keep Discord, Spike has his own bedroom in the castle. In The Lost Treasure of Griffonstone, the Cutie Map calls Pinkie Pie and Rainbow Dash to Griffonstone.

In Hearthbreakers, the castle is decked out for Hearth's Warming Eve. In Scare Master, a dangling sign with a crown on it hangs outside, most likely to play up the horror movie cliché of a haunted castle. In The Hooffields and McColts, the Cutie Map calls Fluttershy and Twilight Sparkle to the Smokey Mountains.

In The Cutie Re-Mark - Part 1 and Part 2, each time Starlight Glimmer and Twilight alter the timeline, the castle disappears, but the Cutie Map remains due to its connection to the Tree of Harmony.

In The Crystalling - Part 1, it is revealed that the castle is the new home of Starlight Glimmer now that Twilight has taken her on as her pupil. Starlight's bedroom appears in Every Little Thing She Does and To Where and Back Again - Part 1.

In Celestial Advice, a medal-awarding ceremony is held at the castle for Starlight Glimmer, Trixie, Thorax, and Discord. In All Bottled Up, Trixie accidentally uses a teleportation spell on the Cutie Map. In Rock Solid Friendship, Pinkie Pie shows Maud Pie the castle, but Maud is unimpressed. In Marks and Recreation, Thunderlane helps the Cutie Mark Day Campers put together a model of the castle out of wood. In Shadow Play - Part 2, the Pillars of Old Equestria visit the castle and recognize it as having sprouted from the seed they planted a thousand years ago.

Beginning with School Daze - Part 1, the School of Friendship is built and opened adjacent to the castle. In The Mean 6, Pinkie Pie briefly presents a cardboard cutout of the castle to Mean Twilight.

In The Beginning of the End - Part 1, as Twilight makes preparations for her impending rule of Equestria, she plans to give the Castle of Friendship to Starlight. She later moves out during the flashbacks in The Last Problem.

Twilight Sparkle and her friends are seen in this castle in My Little Pony Equestria Girls: Rainbow Rocks, gathering books for the castle's library, when suddenly Twilight notices a book vibrating. The book has Princess Celestia's cutie mark on the cover. She opens it and finds out that her friends from Canterlot High School are in trouble. Through research, she discovers that three sirens were banished to the human world by Star Swirl the Bearded. She makes some adjustments to the Crystal Mirror from the first film to make it able to open at any time, as opposed to every thirty moons.

In the half-hour special Dance Magic, Pinkie Pie makes a sculpture of the Castle of Friendship out of chocolate.

In Mirror Magic, Sunset travels to the castle through the mirror after running out of pages in her magic book. There, she meets Starlight Glimmer who gives her a new magic book to communicate with Twilight.

In Forgotten Friendship, Sunset again travels through the mirror to the castle to seek Twilight's help after the good memories of Sunset Shimmer have been mysteriously erased from all of Canterlot High School.

In Spring Breakdown, Sunset, Rainbow Dash, and Sci-Twi transform into ponies and travel to the castle from a different portal to catch up with Twilight. They later bring all the passengers of the Luxe Deluxe cruise ship to the castle after it shipwrecks.

In Sunset's Backstage Pass, Twilight Sparkle writes to Sunset Shimmer about the Time Twirler through the magic book from the Castle of Friendship after Sunset asks her about being caught in a time loop at the Starswirled Music Festival.

The castle appears in the My Little Pony Equestria Girls: Rainbow Rocks film screenplay novelization My Little Pony: Equestria Girls: Rainbow Rocks: The Mane Event. In Starlight Glimmer and the Secret Suite, Starlight discovers a hidden room that proves to be an Andalusian Amplifier, which increases the power of her magic. It is also mentioned that three of the cornerstones have been named Honesty, Communication, and Sea Otter by Pinkie Pie.

The castle is seen during the Mane Six's brief cameo in the NFL's Together We Make Football commercial during Super Bowl XLIX.

The castle is featured in Gameloft's mobile game under the name "Twilight's Castle".

"MY LITTLE PONY fans can discover the newest royal empire inside the FRIENDSHIP RAINBOW KINGDOM castle playset, a grand three-level palace fit for a pony princess! Use the friendship keys to unlock a number of magical accessories within the kingdom, including a wardrobe, vanity, book, and treasure chest. Pony friends can travel the kingdom in style on the rolling cloud car, taking a ride down a fun swirly slide. Stops along the way include a lookout tower, golden balcony, swing, and more. Includes PRINCESS TWILIGHT SPARKLE figure, key, cloud car, and themed accessories. (Ages 3 years & up/Approx. Retail Price: $39.99/Available: Fall 14)".[6] It includes depiction of Spike. The playset's packaging, displayed along with it by Hasbro at the 2014 American International Toy Fair, lists its name "FRIENDSHIP RAINBOW KINGDOM" with a trademark symbol.[7][8][9][10] Some promotional photos are of a different version of the playset, in which the first floor's interiors are instead images of the same designs as in Canterlot Castle and the design of the second floor's interior is instead the same as of Golden Oak Library's first floor.[11][12]

A Keys Of Friendship DVD cover depicts Princess Twilight Sparkle with the Castle of Friendship in the background.[14] 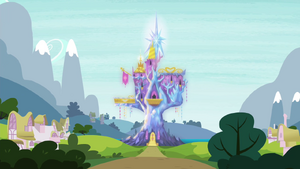