Celestial Advice is the first episode of season seven of My Little Pony Friendship is Magic and the one hundred and forty-fourth overall. Notably, this is the only season premiere to not be a two-part episode.

In this premiere, Twilight Sparkle agonizes over Starlight Glimmer's future and seeks advice from Princess Celestia.

The episode begins with Spike speaking with Starlight Glimmer at her Castle of Friendship bedroom door. While Spike keeps Starlight distracted by talking about her upcoming medal-awarding ceremony, Twilight Sparkle secretly teleports into Starlight's room and takes measurements of her bedroom wall. Once Twilight and Spike are done, they regroup at Twilight's bedroom, where Twilight plans to give Starlight a wall mirror decorated with photographs of all of her friends after the medal ceremony.

Some time later, dozens of ponies and changelings have gathered in the dining hall to honor Starlight Glimmer, Trixie, Discord, and Thorax for saving Equestria from Queen Chrysalis. For their accomplishment, the four of them are each awarded with the "Pink Heart of Courage". During the reception party, while Starlight and Trixie mingle with their friends, Discord asks Twilight what her plans are for her student. Twilight says she has three more years of friendship lessons planned out, but Discord laughs it off, saying Starlight has progressed beyond needing friendship lessons.

Due to Discord's persistent needling on the subject, Twilight gets very nervous about her plans for Starlight, to the point of retreating to her library. Realizing that Starlight has mastered nearly every lesson that Twilight mapped out for her, Twilight turns to her own mentor Princess Celestia for advice. In the throne room, Twilight explains her dilemma to Celestia and comes to realize that, just as Celestia had sent Twilight away to Ponyville to learn about friendship, she must now send Starlight away. Celestia sympathizes with Twilight and tells her no matter how difficult or painful her decision, she must decide for herself what's right.

As Discord informs the rest of the Mane Six about Twilight's upcoming decision, Twilight tries to decide where to send Starlight to further her friendship studies through a series of magical simulations. In the first simulation, she considers sending Starlight to the Changeling Kingdom to help them adjust to their new way of life. Celestia approves of the idea, but Twilight becomes nervous about the possibility of one of the changelings making Starlight look bad and instigating a rebellion against her.

After watching all of Twilight's simulations and listening to all of her worries, Celestia starts to laugh. She reveals that, when they were teacher and student, Celestia had the same fears about Twilight that Twilight now has about Starlight. When Twilight was a filly, she demonstrated great academic aptitude but always kept herself isolated from other ponies. Eventually, Celestia decided the best thing was to send Twilight to Ponyville, but she kept coming up with excuses to not send her away. She realized it was because she didn't want Twilight to go and that once she made friends, she wouldn't need her teacher anymore. Twilight conveys to Celestia that she will always need her, and Celestia assures her that Starlight feels the same way.

"Letting someone spread their wings doesn't mean you no longer have a place in their lives."
— Princess Celestia

Twilight returns to the party in the castle dining hall, and the ponies eagerly await her announcement. Twilight officially recognizes Starlight's completed lessons and many accomplishments and says she has nothing left to teach her. With this, she announces that today is her pupil's graduation day, and the ponies cheer for Starlight Glimmer.

Before Starlight makes plans with her friends to celebrate her graduation, she pulls Twilight aside to discuss what this means in more detail. While Twilight is very proud of her student and assures her that she's ready, Starlight reveals that she isn't ready to leave yet. This comes as a great relief to Twilight, and she presents her with her graduation gift: a decorative wall mirror with photographs of her friends. Starlight tearfully thanks Twilight for the gift, and Twilight says no matter what comes next, she will always be there for her.

Some time after the party ends, Pinkie Pie uses a vacuum cleaner to quickly clean up the mess.

Spike: Uh, so... what are you wearin'?
Starlight Glimmer: Not sure. Why? Am I supposed to dress up?
Spike: No! I-I mean, you could. It's like Rarity always says... [imitating Rarity] "There's no such thing as overdressed, darling. You're just the best-looking pony in the room." [chuckles]

Trixie: It was the Great and Powerful Trrrrixie's pleasure to save you from your imminent doom.
Discord: Yes, because you did it all by yourself.

Princess Celestia: It's a wonderful feeling, isn't it? Watching your student shine the way you always knew they could.
Twilight Sparkle: [laughs] My cheeks are sore. I don't think I've ever smiled this much in my life.
Princess Celestia: I can only imagine what that feels like.

Changeling 1: So, uh, you can't have friendship without makeovers?
Applejack: Eh, no-not exactly.

Spike: Hmm, this doesn't seem like something Starlight and Thorax would do.
Princess Celestia: Uh, this is Twilight's fantasy, Spike. There is no wrong way to fantasize.
Twilight Sparkle: Thank you.
Goofy Changeling: Starlight Glimmer is a most apt and perspicacious pony.
Spike: Yep. Definitely a Twilight fantasy.

Spike: Uh, that probably won't happen.
Twilight Sparkle: But it could! I can't just send her off to Celestia-knows-where without thinking it through!
Princess Celestia: Hmm. I was not aware that I was an expression. An appropriate one, of course, for even I don't know the answers.

Princess Celestia: What if she runs into a manticore? Or what if she gets pulled into Tartarus? Or, worst of all, what if she doesn't get along with anypony?
Guard 1: Are we supposed to say something?
Guard 2: I don't think so.

Discord: I may have let it slip that you'd be unveiling your big plan for Starlight tonight. Silly me. But we're all very excited to hear what you've cooked up. [beat] You weren't coming up with a plan just now, were you? Oh, dear. This could be pretty embarrassing for you.
Twilight Sparkle: [sarcastically] Gee, thanks, Discord.
Discord: Any time. I really do love being helpful.

Discord: [referring to Starlight] Darn it. I was hoping you'd send her to my realm. We could've been roomies. Way to not pick up what I was putting down.

Trixie: How do you wanna celebrate? Girls' trip to Las Pegasus?
Thorax: We could throw you a changeling gourd fest! Uh, it's more fun than it sounds.

Discord: Or we could go cause a little mischief. I know a trick that'll turn Celestia's castle into cheese. Do you think it's a "gouda" idea? [laughs] That's just the first of many cheese jokes if we go down this path. 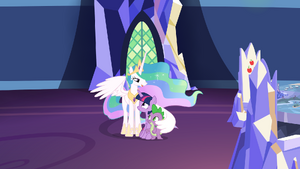 Retrieved from "https://mlp.fandom.com/wiki/Celestial_Advice?oldid=2165986"
Community content is available under CC-BY-SA unless otherwise noted.